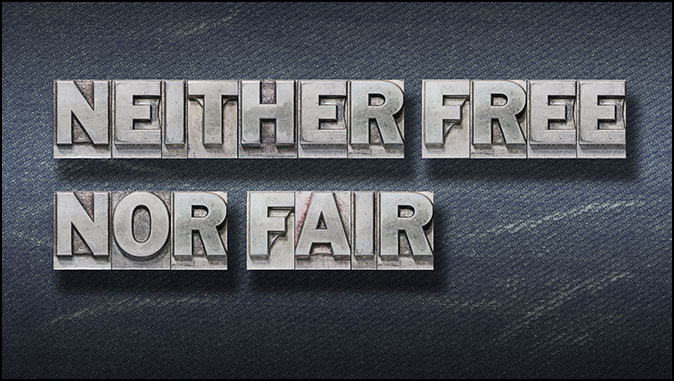 Free and Fair?
By Steve Schmutzer

Along with millions of other Americans, I was glued to my TV on November 3rd. Like many doing that, I was watching the election coverage on Fox News.

I was frustrated that FL and TX were not called for President Trump till long after it was plain he’d won them. I smelled a rat when AZ was called for Biden after just a fraction of those votes had come in.

When several swing states suddenly decided to stop counting the votes after Trump’s numbers were soaring, I knew we’d been had. By ‘we,’ I mean all supporters of law and order. By ‘had,’ I mean election fraud was now running full speed.

There never was an ‘if’ about any of the fiasco, and the ‘when’ part had happened in prime time.

In the days since, a mountain of evidence – yes, EVIDENCE – has accumulated to show the magnitude of the corruption that has characterized the 2020 elections.

In Pennsylvania, President Trump was up by 700,000 votes late into the election night. But more than a million ballots have since been added – many of them only having one mark on them “for Biden.”

It was no different in places like Wisconsin and Michigan where, in the wee morning hours after counting stopped, over 100,000 votes that were 100% for Biden were suddenly dumped into the system.

In a free and fair election, this is statistically impossible.

In Georgia, we’ve all watched efforts to implement a harvesting system just for Biden after November 3rd. In Nevada, tens of thousands of votes were from out-of-staters and had unverified signatures. In multiple swing-state precincts, there were more votes than registered voters.

In data from Edison Research, and as reported on The Gateway Pundit and other news sources, it now appears that over 500,000 votes were switched from Trump to Biden on highly suspect computer voting systems like Dominion. So many questionable transactions occurred within the three main vendors of voting equipment – Dominion Voting Systems, Hart InterCivic and Election Systems and Software – that independent assessments of the matter are now reporting that more than three million electronic votes may have been manipulated.

At this point, there are thousands of witnesses who have come forward, and many who have prepared sworn affidavits concerning election fraud. The situations are diverse, but they all have a common thread: blatant corruption.

There are USPS supervisors telling their subordinates to postdate mountains of ballots, and there are trucks and cars that arrived after counting had been stopped in swing states to unload – GASP! – tens of thousands of exclusively-Biden ballots. There are records of 25,000 nursing home residents all ordering mail-in ballots at exactly the same moment in time, and there are masses of dead people voting for Biden. GOP voting observers were prevented from doing their job, and the list of infractions mounts from here. Many of the sworn affidavits – all of which qualify as admissible evidence – are backed up by videos, photos, and various other supporting records.

What are we to make from this? Where to go from here?

Well, for starters, Attorney General Bill Barr, had to – by law – wait 6 days after the election before he could intervene on the problem. He has now done that. Based on the immense amount of ‘substantial voting irregularities,’ he and the DOJ are now looking into the situation. I’m not a huge fan of Barr, so I’m not holding my breath here…

It’s worth noting that in response to Barr’s order, Richard Pilger, the top DOJ official overseeing voter fraud investigations, promptly quit. This is the same Richard Pilger who worked closely with Lois Lerner at the IRS during Obama’s term to unfairly target Tea Party organizations and other conservative groups. No surprise there; he’s already shown his cards.

As well, it’s no surprise that President Trump and his attorneys have filed many lawsuits to get to the bottom of all this corruption. They need to! As a nation we need to ensure the rules governing a ‘free and fair’ election are upheld. This isn’t about Trump; it’s about our nation’s laws.

Who knows where all this will go? It’s possible that when all the facts are exposed, a very different outcome than what the media is hastily promoting will emerge. It’s possible states won by Biden will be won instead by Trump. It’s possible that this issue may make it all the way to the SCOTUS – and frankly, it’s anyone’s guess as to what will happen there if it does go that far.

What’s plain to a clear head and an honest conscience, however, is this: significant corruption HAS taken place! President Trump had many rallies of thousands upon thousands of attendees. Some rallies were well north of 50,000 people in places like Pennsylvania. Meantime, Biden was drawing a few dozen honking cars while mostly hiding out in his basement.

President Trump also had record minority support, and massive spontaneous car and boat rallies erupted all over the US on his behalf. Trump was on track to have a bigger win than he had in 2016 – at least until unethical people decided to shut down the counts and resort to Plan B.

It doesn’t take rocket science to figure out that, comparatively speaking, very few people were even enthusiastic about Biden. There was no evidence of the kind of support for Biden that Trump had – and yet we are supposed to believe that Biden’s vote count surpassed the greatest rubber-meets-the-road campaign in US history?

Sorry – I’m not buying that one. No reasonable person would.

Furthermore, are we supposed to believe that Joe Biden defeated President Trump while losing a bunch of seats he needed in the US House and state legislatures? Again, this is highly improbable.

As if to underscore the patently obvious corruption, a double standard has now been added to this mix. Ben Rhodes, the former deputy national security adviser during the Obama administration, claimed that “foreign leaders are already having phone calls with Joe Biden.”

The problem is, Gen. Mike Flynn, the first national security adviser for President Donald Trump, was prosecuted under an obscure law called the Logan Act for having exactly this type of communication with foreign leaders before Trump was sworn in. The case against Flynn never had any merit, but the obvious double standard now is shocking to see. As I’ve said before, it all comes down to whether one has a “D” or an “R” after their name.

I want to wrap up with a few thoughts. Though I am personally convinced that massive election corruption has been imposed upon the American people by evil politicians and agendas, the matter is now in God’s hands. He has a sovereign plan, and no aspect of human intention, intervention, interruption, and infraction can prevent it.

God is not done writing the story. More details will come, and nobody on this earth knows how all this will ultimately unfold.

But God knows the end from the beginning (Isaiah 46:10). That’s an infinite timeline in both directions. Perhaps the bigger takeaway from that verse is, “My purpose will stand, and I will do all that I please.” Nothing catches God by surprise, and He’ll have His way.

Meantime, it’s a really unwise move to get on the wrong side of God – and He’s keeping detailed records (Rev. 20:12). When we elevate corruption, support injustice, celebrate depravity, bury the truth, defend lawlessness, behave foolishly, and believe wrongly, we are in a very bad spot. We are only developing a strong case against ourselves.

A time is coming when “every knee will bow and every tongue will confess that Jesus Christ is Lord” (Philippians 2:10-11). Yes, that means EVERYONE! But the tragic fact is it’ll be too late for most.

The best advice I can give you is to get your heart right with God right now while you still can.