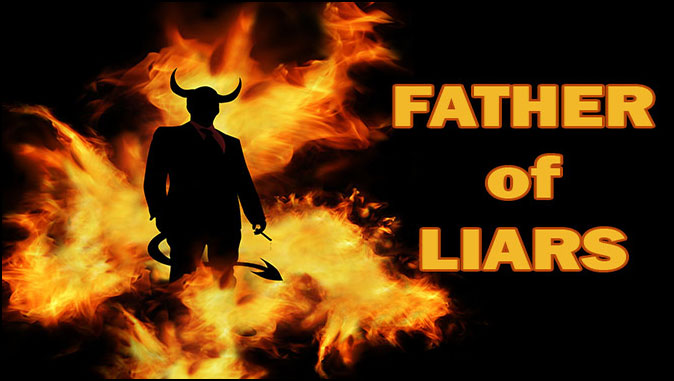 Father of Liars
By Terry James

Jesus foretold that one of the great signals of His Second Coming and of the end of the age would be deception and deceivers. Paul, in 2 Thessalonians 2 tells us there will be strong delusion in the last days. He prophesied also that there will be “evil men and seducers growing worse and worse, deceiving and being deceived.”

God’s Word — Jesus Himself — declared that the evil at the core of all the deception is a being full of lies. He said in answer to the Jewish religious zealots who tried to entrap Him:

“Ye are of your father the devil, and the lusts of your father ye will do. He was a murderer from the beginning, and abode not in the truth, because there is no truth in him. When he spiked a lie, he speaketh of his own: for he is a liar, and the father of it.” – (John 8:44)

There is scriptural proof, therefore, that the charge is based on God’s truth when we say all the lies we see perpetrated in these closing days of this Age of Grace (Church Age) come from the chief minion of Ephesians 6:12. Indeed we have experienced an increase in lies coming at us from many directions.

Remember the explosion of lies following the presidential election of 2016. The accusation of Trump’s campaign and election being in cahoots with the Russians — with Vladimir Putin himself — was in our faces for Trump’s full four years as president. The lies kept coming, and were front and center on every mainstream news outlet and left-wing social media every hour of every day for those years.

Then it was proven that that the Russian collusion charge was all lies, based upon a phony, political dirty trick. The opposing presidential campaign paid operatives to concoct and distribute a false dossier involving charges accusing Mr. Trump of paying Russian prostitutes to do salacious things in order to spew vitriol against Barack and Michelle Obama, his predecessor and former first lady.

The same political party concocted lies against a Trump administration Supreme Court candidate. We remember the weeks and weeks of that parade of prevarication. The president was subjected to a daily barrage for weeks and months in impeachment efforts — all based on lies.

Mainstream newscasts, social media blogs, and other platforms made up lies about the Black Lives Matter and Antifa destruction of cities across America being peaceful protests rather than riots. The same news and entertainment media, while ignoring those destructive, anti-American insurrections, now accuse Trump supporters who protested — mostly peacefully — in Washington, DC, on January 6, 2021, as being insurrectionists. The vice president declared the protest and march to be the evil equivalent of December 7, 1941, and September 11, 2001.

Lies of less magnitude, but progressing geometrically on an hour-by-hour basis in order to maintain the political power they achieved through one of the biggest lies — those involved in the stolen election of 2020 — continue to do their destructive work against the republic.

We have covered a number of times the fact that the globalist minions, both human and demonic, are working incessantly to set the stage for the coming Antichrist regime. I’ve pointed out that two prongs of this evil effort are primary in Satan’s blueprint. One is the climate-change mantra and the other is the COVID pandemic that, it is becoming obvious, isn’t likely to end anytime soon. Both are based largely on lies generated by the principalities and powers in high places.

The initial effort was the lies of global warming. That morphed into climate change, when the ice cap at the North Pole didn’t melt and submerge New York City in the waters of the Atlantic after the first prediction of such catastrophe some thirty years ago.

Before the findings, the United Nations-backed Intergovernmental Panel on Climate Change (IPCC) confidently said in its First Assessment in 1990 that global warming is a great deal and a climate emergency. But given the succession of long periods without global warning as shown by HadCRUT4 data set, it is safe to say that the IPCC’s warning is way off the mark.

One writer renders judgment on the climate-change hoax.

Journalist and blogger Christopher Monckton noted that the West is self-destructing due to its belief in global warming, which has benefited China and Russia…

Monckton noted that totalitarian administrations, such as that of the United Kingdom, is imagining climate emergency – giving as example the situation in rural Cornwall. He predicted that the first political party to find the courage “to oppose the global warming nonsense root and branch” will sweep the board at the next elections.

“There is no more of a climate emergency today than there was in 2012, so the only reason for declaring one now is not that it is true (for it is not) but that it is politically expedient,” wrote Monckton.

The political leadership in the West, said Monckton, is committing economic suicide as it allowed high-energy industries to be wasted because of the fear of imagined global warming. “Whole industries are have already been or are soon to be laid waste – coal extraction, distribution and generation (and, therefore, steel and aluminum); oil and gas exploration and combustion; internal-combustion vehicles; and a host of downstream industries which will create joblessness and hardship to income earners,” he wrote. (“Global warming statistically insignificant: Climate emergency is imaginary,” Matthew Davis, 1/6/22, Rapture Ready News)

With regard to the pandemic that has the entire world in fear of facing death, the deception — the lies involved — are beyond our ability to comprehend at this point. I’m of the conviction that could be at the center of the prophesied lie that leads to enslavement of the populations of planet earth following the Rapture of the Church.

Never has there been such a global effort among the leaders of the world’s nations in attempts to bring their peoples into subjection. Demanded compliance in the matter of vaccinations and mask-wearing constitutes a powerful mechanism that could soon force all into the one-world mold Antichrist will impose.

The big lie — the great delusion of 2 Thessalonians 2—might spring from the present delusion being foisted — that the jab will bring freedom from pestilences and freedom to be an accepted citizen of the new order.

What we are witnessing might be the catalyst for Antichrist’s underlings — his liars — to bring about control over humanity which the father of lies has desired for millennia.

Before that can happen, the One who is the Way, the Truth, and the Life will step out of the heavenly throne room and call those who belong to the eternal family of God the Father to Himself. You don’t want to miss that magnificent reunion in the clouds of glory.

Again, here’s how you can make sure you will go to Christ when He calls the saints.