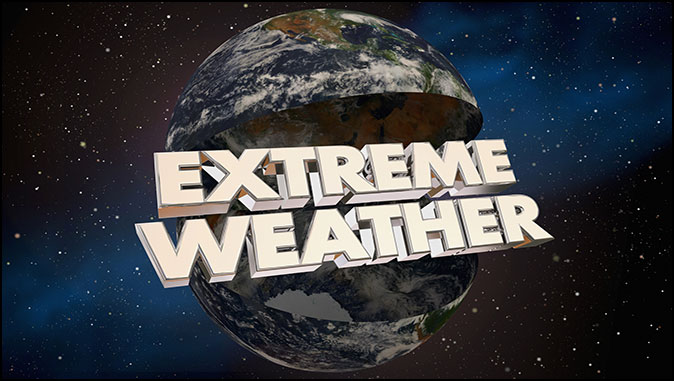 I’ve noticed that more Weather events are being labeled with the extreme. There doesn’t seem to be any middle ground. One area of the world is hot and dry while other areas are getting flooded out.

We have a massive drought in several Western states. On the eastern side, we have Pennsylvania and New Jersey under a Flash Flood Emergency. Some of the cities that got dumped on are Croydon, PA, which received over 10 inches of rainfall; Bristol Township, PA 9.85 inches; Bristol, PA 8.69 inches; West Bristol, PA 8.18 inches; and Florence, NJ 7.63 inches.

China is having to deal with crippling floods that have killed hundreds of people and displaced millions across the central and southwestern parts of the country. There are 71 rivers already exceeding warning levels, and the rainy season has just started.

Eastern China’s Shandong Province was hit by its largest tornado outbreak in more than 10 years on July 11, 2021. At least 10 tornadoes were reported, with at least 3 of them violent. The reports are still coming in, and the number of reported tornadoes is rising.

China’s National Climate Center this month predicted “generally poor weather conditions” for the rest of the summer and warned that the country will face more extreme weather events than usual.

Last summer was also a bad year for flooding in China. The floods were said to be the worst floods in decades and forced China to import large volumes of corn, soybeans, and pork. With 2021 looking to be a repeat of 2020, the global food supply may reach a breaking point.

Heavy rain and floods have caused extensive property damage and the loss of over 160 lives in Germany’s western state of Rhineland-Palatinate, At least 70 people are still missing. Two firemen drowned and the army was deployed to help stranded residents, after a slow-moving low-pressure weather system caused once-in-a-generation floods

“In some areas, we have not seen this much rainfall in 100 years,” Andreas Friedrich, a German weather service spokesman, told CNN. He added that “in some areas we’ve seen more than double the amount of rainfall which has caused flooding and unfortunately some building structures to collapse.”

Another extreme weather event is the heat. Cities are not just setting daily records for high temperatures; all-time records have been set all over the world.

Death Valley, California, is a very hot place. Last Sunday, the morning low temperature was a sweltering 107.7 degrees, the highest ever recorded in North America. By the late afternoon, the mercury had swelled to a blazing 128.6 degrees. The combination of the two produced the highest daily average temperature ever observed on the planet: 118.1 degrees.

We may have set a world record daily average temperature at the Stovepipe Wells weather station in the northern part of Death Valley National Park. The measurement will have to undergo review by the World Meteorological Organization (WMO) before being declared officially valid. This process can take a few years. The current record holder is Furnace Creek, which reached the highest maximum temperature recorded on the planet: 134 degrees on July 10, 1913.

Canada has had a heatwave that smashed several records. On June 29, Lytton, a small town about 124 miles from Vancouver, hit 121 degrees, setting a national record for the highest temperature ever recorded across Canada.

Las Vegas tied its all-time high temperature of 117 degrees. Within a 24-hour period, Las Vegas went from record-breaking heat to record-breaking rainfall. The next day, Sin City registered 0.10 inches of rain, the most rain the valley has received on July 11 since records began in 1937.

The Middle East has always been a hot place during the summer. Last month a dozen major cities managed to set record highs. Nuwaiseeb, Kuwait, reached a record high of 127.7 degrees. I’ve been to Kuwait, and it is the most miserably hot place I’ve ever visited. Because it’s right next to the Persian Gulf, the humidity is very high.

All these extreme weather events can not be attributed to global warming. The burning of fossil fuels is blamed for the greenhouse effect. Global warming should be a gradual process.

To find out why we are having so many extreme weather events, we need to turn to Bible prophecy. Jesus said that calamitous events would be the warning sign of the last days. They would get worse over time, like birth pangs. This is what we are experiencing, so the rapture must be very near.

“As Jesus was sitting on the Mount of Olives, the disciples came to him privately. “Tell us,” they said, “when will this happen, and what will be the sign of your coming and of the end of the age?” Jesus answered: “Watch out that no one deceives you. For many will come in my name, claiming, ‘I am the Messiah,’ and will deceive many. You will hear of wars and rumors of wars, but see to it that you are not alarmed. Such things must happen, but the end is still to come. Nation will rise against nation, and kingdom against kingdom. There will be famines and earthquakes in various places. All these are the beginning of birth pains” (Matthew 24:3-8 NIV).