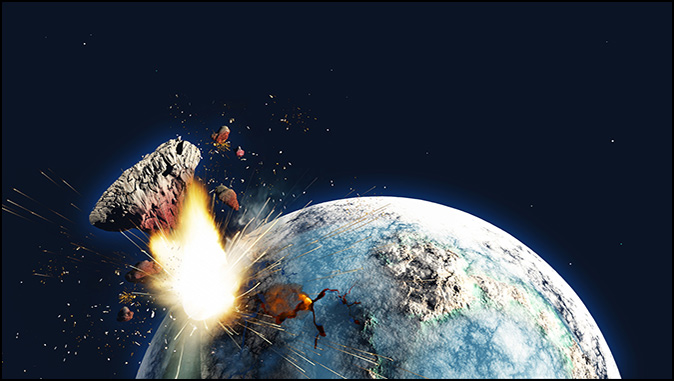 Everything, Everywhere, All At Once
By Pete Garcia

With all of the last days’ economic, political, and military convergences. With all of the prophetic signs flooding our newspapers and newsfeeds on an hourly basis. With the impending collapse of Western Civilization being a mere cataclysm away from happening. With everything prophetic happening everywhere, all at once going on, the one nagging question that keeps rolling around in the back of my brain is, who is going to take care of my dogs when we go up?

Seriously. I think about this.

I’m not a dog person, and yet we have eight. I guess you can say my wife has a soft spot for our four-legged friends. And with five children, every child needs their own dog. I can’t emphasize needs enough.

And yet, here we are…in the last moments of the last days, and I’m sweating whether or not I should cage them or not when I leave the house for any extended period of time. It seems, if I cage half the group, the other half behaves. If I don’t cage them at all, they act like a raving band of lunatics who’s never been inside a house before.

Nevertheless, the question of whether I should sweat the cage question, or not, is something an increasing number of watchers are faced with. That is how close to the end we are.

Right now, there are at least nineteen existential threats that are currently hanging over our collective heads like a giant boulder teetering on the edge of a cliff on the San Andreas faultline. Crazily enough, none of these threats include Covid, transgendered bathroom rights, or man-made climate change. However, for the sake of argument, here are said nineteen existential threats to both our nation and the world:

4. EMP attack by the aforementioned

5. The collapse of the US Dollar

6. The collapse of the Chinese Yuan

9. A serious bioengineered pandemic with over a 10% infection fatality rate

10. A massive cyber attack shutting down the sixteen critical vulnerable points in the US (Thanks Joe for spilling the beans)

12. A digital pandemic (cyber virus shutting down everything)

18. A massive meteor hits the earth

19. Alien invasion or some other extra-terrestrial event

I’m sure there are many other black swan events out there that are equally serious threats we don’t even know about, but these were just some of the things I could think about off the top of my head. Each one of these, in and of itself, are extremely serious threats that have the potential to upend life as we know it. Incredibly, these are also the very things our government is not taking seriously at present. Our current government seems more concerned with making our military more inclusive than they are on whether the Chinese or Russians have doubled the size of their navy or successfully test fired (and used) hypersonic missiles.

If our government spent a fraction of the time and energy on any one of these nineteen that they do with the ridiculously fallacious global cooling, global warming, climate change “threat,” I would feel a little better. It would mean that somewhere up there in the bowels of government, adults were involved. Instead, we have the never-ending parade of environmentalist doomsday prophets with prediction track records worse than Harold Camping.

These global utopians are enthusiastically willing to suicide the American economy and subsequently, the world’s, because 50 years from now, the ocean temperatures might rise one-half of one degree. The environmentalist fear-mongering has been at a fever pitch for at least the last twenty years, and this forthcoming catastrophism apparently has former president Barak Hussein Obama so upset by the possibility of rising sea levels, that he sacrificially bought an $11.75M house at Martha’s Vineyard (on the coast) in 2019 to mourn its impending destruction.

I don’t know about you, but it sort of feels like we are watching a massive parade of liberal/progressive lemmings defiantly marching off a cliff. Not only that, but the suicidal lemmings have coopted our elected and unelected “leaders” into joining them in destroying the current world order all because of a make-believe threat that might happen someday…maybe. That’s not just throwing the baby out with the bathwater, that’s taking a sledgehammer to the sink and then burning the house down to spite the couple who had the baby. These are exactly the kind of people Paul is speaking of in Romans chapter one, who suffers from the divine punishment of being ‘given over’ to a debased mind and are no longer able to reason or think clearly. The fact that we have the lunatics running the asylum leaves little doubt as to why he said the last days would be “perilous times” (2 Tim 3:1).

These same people who are so upset about the theoretical climate cataclysm that they are setting themselves on fire, committing acts of vandalism and terrorism, and essentially throwing their lives away as “martyrs” for a lie. There is, even now, a growing cadre of environmentalist legislators and celebrities who are now championing the absurd idea that we should convert all of our meat and wheat-based agricultural industries, for insect-based food economies. This is based on agendas pushed by the United Nations nearly ten years ago.

“In 2014, the United Nations (UN) and the Food and Agricultural Organization (FAO) put out a white paper — hundreds of pages. The title of the white paper was Edible Insects – Future prospects for food and feed security,” he said.

“And the UN and the FAO concluded in this document if insects do not enter the food chain, traditional protein farming will destroy the planet. We use all our rainforests to grow feed for all the meat we eat. You know, most of our rainforest is being taken down to grow feed for our purposes. So it’s, unfortunately, a very unsustainable system that is rapidly causing havoc on our planet.” (Source)

The push to save “Mother Earth,” or Gaia, has gone through cycles of popularity before, but never one with such political momentum as of now. To be fair, the UN, the WEF, and numerous private and corporate entities have warned us that they are in the last push for the Great Reset to happen no later than 2030. For them, 2030 is the do-or-die date to get the world back on “the right track” or else, face extinction. Geez, when have we heard that before?

That calamity is the Rapture of the Church.

Not only will every born-again believer be removed from the earth simultaneously but also every child under the age of accountability (IMHO under the age of 20). This sudden disappearance also includes everyone born with Down Syndrome and/or other degenerative cognitive conditions. For the first time in two thousand years, there will be no believers or “innocents” left on planet earth.

The following seven+ years after the Rapture, will literally be, hell on earth. All of the things these environmentalist fundamentalists have been railing about for the past sixty years will be dumped back on their heads. Naturally speaking, global temperatures will rise. The oceans will be turned to blood. Islands will be sunk, triggering countless tsunamis that will ravage the coastlines. The air will be so filled with smoke and ash, that it will blot out the light from the sun, moon, and stars. The trees and grass will be burnt up, and the rivers will turn poisonously bitter.

Supernaturally speaking, demons and demonic armies will march across the land wiping out millions, as men will be given over to their most base and wicked desires. The governments of the world will become impossibly totalitarian as they introduce increasingly draconian measures to maintain control of a world spinning out of control. And just when things couldn’t get worse, they do.

The armies of the world will gather in Israel and will attempt to destroy the last remnant of Jewish people, when all of a sudden, the skies peel open (the earth spinning counter to the normal rotation of the heavens) and Christ will return in power and glory with the armies of heaven in tow. Here, He destroys the armies in such a bloodbath, that it creates a 200-mile river of blood that is as high as a horse’s bridle. The end has come and Jesus will judge the remaining nations separating them like one would separate the sheep from the goats.

After six thousand years, dominion is finally stripped from Satan’s slimy grip, and a new world order is restored. Jesus, the rightful ruler, reclaims His dominion over the earth and restores it back to its original paradisaical conditions. He establishes His throne in Jerusalem and exalts it as the head of nations. The Church, now glorified and immortal, serves as part of the royal family ruling and reigning with the King of Kings, and Lord of Lords.

But for now, we live in this fallen-down kingdom. A kingdom that is shrouded in darkness and beset by sin, corruptness, wickedness, violence, and debauchery. Even worse, is the escalation of all these things because they are coming in waves with increasing frequency and intensity that are seemingly wearing or grinding down the saints. Just remember.

PS: All dogs don’t go to heaven, but they do go to the kingdom. I am a firm believer that whatever happens to my dogs in this life I will see them again in the kingdom. We know dogs aren’t allowed in the New Jerusalem (or at least it seems this way), but there will be the earth below wholly renovated back to Eden-like conditions that they can run and explore and be the happiest dogs they’ve ever been, forevermore.