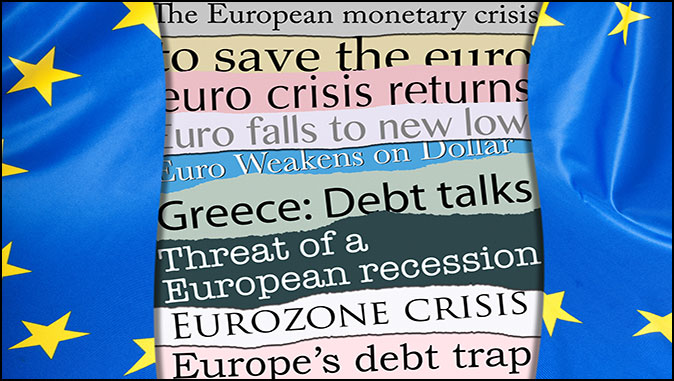 Europe’s Finances Are a Mess
By Todd Strandberg

Over the years, I’ve paid heavy attention to the US economy because the vast majority of RR’s readers are from North America. The financial situation in Europe is so dire, I think it needs special attention. The COVID-19 virus has generated massive budget shortfalls among EU members.

Europe is now back into its third lockdown, and it appears that 2021 will be no better than 2020 as central governments print vast amounts of money to provide stimulus checks to unemployed Europeans.

The EU vaccine program has been an absolute disaster. It is a classic example of how socialism gums up the workings of the capitalist economic system. While the US has 38% of its people vaccinated, the EU has only 12% of its citizens vaccinated.

On 27 January, officials raided AstraZeneca’s facility in Brussels, following production problems that had reduced the amount of its yet-to-be-approved supply to the EU. The Commission’s president threatened to invoke Article 122, allowing the EU to seize AstraZeneca’s factories and ban vaccine exports to the UK. Because AstraZeneca is a British firm, the concern about the safety of the vaccine seems to be more the result of political infighting than pure science.

Germany’s decision to hit the brakes on AstraZeneca’s vaccine came at a terrible time, setting back the vaccine rollout just as Europe confronts a new wave of infections that have led countries to reimpose or extend the restrictions.

All the nations that needed a bailout following the Great Recession are back into hot water: Greece, Portugal, Cyprus, and Ireland. Greece has had three official bailouts since 2010, but it has credit extended to it at least eight times. With Greece’s debt at 200% of GDP, a fourth bailout is only a matter of time.

The Greeks have no incentive to balance their budget. The European Central Bank is so sensitive to rising bond yields that it is determined that they are kept as low as possible. The degree of suppression is illustrated by a Greek 30-year bond selling at a yield of 1.93% — half a percent less than the US Treasury equivalent. It is plainly wrong for a country with a deteriorating government debt to GDP ratio of 200% and an appalling track record.

What’s different this time around is that Italy, Spain, and France have joined the list. These three nations are massively larger than the four other countries, and they have total debts equal to $7.5 trillion. Italy’s national debt equals $3.1 trillion, which is 154% of its GDP.

The Germans are going to be the ones who will need to approve this new credit. The strong work ethic has made Germany Europe’s financial powerhouse. After endless rounds of bailouts to its fellow EU members, the Germans are probably starting to feel like someone who has a joint bank account with a heroin addict.

The German government may not be able to play Santa Claus much longer. Germany had seen its national debt declined as a percent of GDP for nearly a decade. Since the COVID-19 outbreak, Germany’s debt has soared from 60% to 83% of GDP.

Since many European nations owe Germany trillions of dollars from all the products they’ve purchased from their neighbor, Berlin may have no choice in voting for more bailouts. France alone owes Germany $1 trillion.

I think it’s by design that every major economic power on planet Earth has a major problem with too much debt. The day will come when central banks will lose control and panic will sweep the globe as it did in 1929. Then will come a man who has all the answers to the world’s financial woes.

“And he causeth all, both small and great, rich and poor, free and bond, to receive a mark in their right hand, or in their foreheads: And that no man might buy or sell, save he that had the mark, or the name of the beast, or the number of his name. Here is wisdom. Let him that hath understanding count the number of the beast: for it is the number of a man; and his number is Six hundred threescore and six” (Revelation 13:16-18).