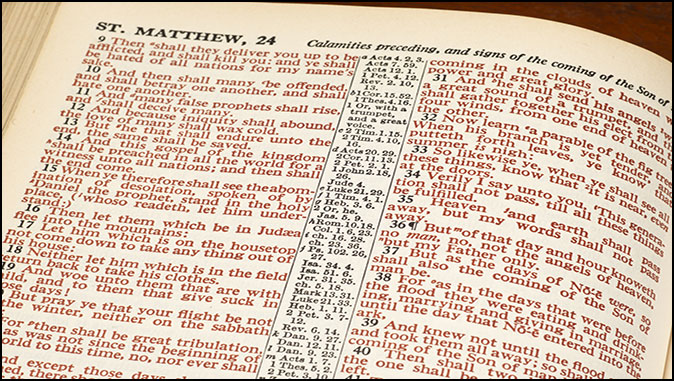 The End Times According to Jesus…Part 4 (Why Didn’t The Lord Mention The Rapture?)
A Bible Study by Jack Kelley

In 51 AD, almost 20 years after the Resurrection, the Apostle Paul became the first to reveal the incredible secret that would become known as the Rapture of the Church. He did this in his earliest written communication, his first letter to the Thessalonians (1 Thes. 4:16-17), repeating it four years later in a letter to the Corinthians (1 Cor. 15:51).

From Thessalonians we know that at the Rapture, the dead in Christ will rise first to be followed immediately by believers who are left and still alive. Concerning living believers, Paul’s letter to the Corinthians explains that in the twinkling of an eye, we’ll be changed from mortal to immortal, bypassing death altogether. Either way, in less than an instant we’ll all arrive together in Heaven.

As an aside, those who dispute this doctrine claim that the word rapture doesn’t appear in the English translation of either of Paul’s letters cited above (nor anywhere else in scripture for that matter) and of course they’re correct. The original Greek word Paul used to describe the rapture in 1 Thes. 4:17 is harpazo, usually rendered “caught up” in English translations.

Because of the growing dominance of the Roman Empire in Biblical times, Latin was fast replacing Greek as the world’s common language and so about 400 AD the Bible was translated from Hebrew and Greek into Latin. Harpazo became raptus, the Latin root of the English word rapture. It means “the transporting of a person from one place to another, especially to heaven.” So it’s the Latin version that gave the event its name. Our current English translations are taken directly from the earlier Greek texts, and that’s why the word rapture doesn’t appear in them.

But why didn’t the Lord announce the whole issue of salvation for the Gentiles including the Rapture of the Church during his time here? Two reasons. First, Israel had to receive a bona fide offer of the Kingdom. His commitment to them was clear. The first time He sent the disciples out to minister, He told them, “Do not go among the Gentiles or enter any town of the Samaritans.” (Matt. 10:5) And later when the disciples asked Him to respond to a Gentile woman whose daughter needed healing, He at first declined saying, “I was sent only to the lost sheep of Israel.” (Matt. 15:23-24) Before He could expand His ministry to the Gentiles, He had to fulfill His promise to Israel.

So just as he had offered reconciliation to the Amorites in Abraham’s time, knowing in advance that they would reject Him, (Gen. 15:16) the Lord extended His offer of a Kingdom to Israel. And of course Israel did reject His offer by attributing the power behind His miracles to Satan, (Matt. 12:22-37) and eventually accusing Him of blasphemy (Matt. 26:65). This rejection was confirmed to them in the parable of the tenants (Matt. 21:13-44). But the pre-determined order of first the Jew then the Gentile (Rom. 1:16) had to be observed. (Prophetic Scriptures tell us Israel will get another chance, and the next time they’ll accept.)

Second, knowing before history began that the Jews would reject Him the first time, the Lord had always planned to extend His offer of salvation to the Gentiles, and that meant something really dramatic had to happen. Gentiles were even worse sinners than Jews, who at least made periodic attempts to obey. But for 4000 years the Lord had demonstrated through His people that no level of excellence in human behavior could ever meet His requirements for salvation. And even with the most complex religious system ever devised, the most expensive house of worship ever built, the most detail conscious people ever created, and the most aggressive sacrifice of innocent blood ever undertaken, the final score at the end of the Dispensation of Law was zero souls saved through religious works. (Rom. 3:20)

Well, He didn’t convince them but He did convince Satan, who believed that eventually all of humanity would wind up with him in the lost column of the ledger, Jew and Gentile alike. Surely then the Lord would have to rescind his judgment against Satan (Isaiah 14:16-21). After all, was he any worse than sinful mankind? Hadn’t they also rebelled, tried to set up their own kingdoms, and even tried to become their own God? The God Who is Love couldn’t stand by and let all his precious children go to hell just to punish Satan, could He? And if He bent the rules for them, He’d have to bend for Satan.

But no one knew what the Lord had cooked up to solve this problem. Having known from the beginning that we couldn’t save ourselves by our works, He had determined in advance that He would save us by our faith. That meant someone qualified to do so would have to step up and pay the penalty for our sins for us. Then God could promise us that if we accepted this substitution in faith, we would be saved.

Of course the only One qualified to do this for us was God Himself. So He did. “He Who had no sin was made a sin offering for us, so that in Him we might become the righteousness of God.” (2 Cor. 5:21) And as a special blessing for “believing though we have not seen” (John 20:29) He even went so far as to make His Church a separate classification of humanity, (Ephe. 2:15) giving us a pre-imminent place in His Kingdom, and promising to take us out of this world to be with Him forever in a secret, sudden departure we now call the Rapture. And though we can look back and see hints of His plan all through the Old Testament, (Isaiah 49:6 for example) neither Satan, the leaders of Israel, nor even the Lord’s closest disciples realized that His death on the cross was intended to accomplish all this.

“None of the rulers of this age understood it,” Paul wrote, “For if they had they would not have crucified the Lord of Glory.” (1 Cor. 2:8) Implicit in the phrase “rulers of this age” is a reference to Satan, whom Paul called “the god of this age” in 2 Cor. 4:4. If Satan had known that his efforts to defeat the Lord by killing Him would result in his own total defeat, he would have done anything he could to prevent it.

I’ve Got A Secret

For these reasons the Rapture of a largely Gentile Church had to be kept secret. It was part of God’s secret wisdom, Paul said, “a wisdom that has been hidden and that God destined for our glory before time began” (1 Cor 2:7). Paul was not authorized to reveal this until nearly 20 years after the Lord’s death, when it was too late for anyone to do anything about it, but it’s what he meant when he wrote to the Colossians, “And having disarmed the powers and authorities” (by paying the penalty for our sins) “He made a public spectacle of them, triumphing over them by the cross.” (Col. 2:15).

(It’s easy to forget that up until Peter’s vision and subsequent visit to the home of Cornelius detailed in Acts 10, most believers had come from among the Jews. The acceptance of Gentiles into the Church didn’t become official policy until the council at Jerusalem 13 years after that in Acts 15.)

What was to have been Satan’s great victory has resulted in his total defeat. Now the only ones on his side of the ledger will be those who choose to be there by rejecting God’s offer of pardon. Their choice relieves God of the responsibility. He still grieves over them, but can’t override their sovereign right to choose their own destiny. And since they’ve chosen to join him, Satan can’t use them as leverage to get a better deal for himself.

The enormity of God’s Gift of Grace, made available to Jew and Gentile alike and sealed with the indwelling presence of the Holy Spirit, is something so unbelievable that neither Paul nor any other Apostle was ever able to adequately describe it. The best Paul could do was to borrow a passage from Isaiah, “No eye has seen, no ear has heard, no mind has conceived what God has prepared for those who love Him” (1 Cor. 2:9). Amen to that.

And so one day soon, with no prior warning and at a time when the world least expects Him, “the Lord Himself will come down from heaven, with a loud command, with the voice of the archangel and with the trumpet call of God, and the dead in Christ will rise first. After that, we who are still alive and are left will be caught up together with them in the clouds to meet the Lord in the air. And so we will be with the Lord forever.” (1 Thes. 4:16-17) There is no precedent condition, nothing that must happen first, except that if you want to be included you have to give your heart to Him who’s coming before the trumpet call sounds. Better do it right away, for if you listen carefully you can almost hear the footsteps of the Messiah.