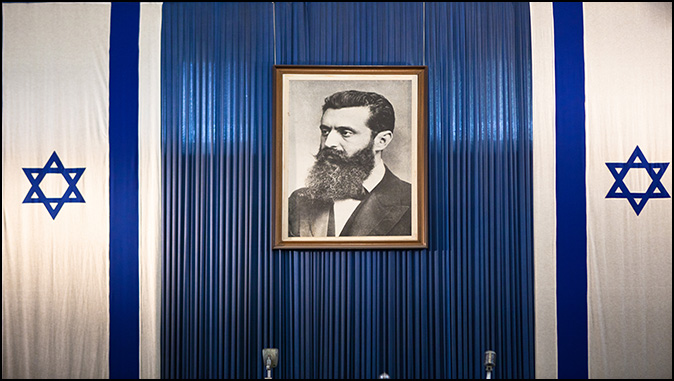 “For I will take you from the nations, gather you from all the lands, and bring you into your own land.” – (Ezekiel 36:24)

Jesus is the focal point of the entire Bible. The Old Testament prophets pointed to His humble first advent and saw glimpses of His glorious second coming. Second only to the Messiah, the prophets were also focused on Israel — the apple of God’s eye (Zechariah 2:8).

Seventy-four years ago, the world witnessed the rebirth of a nation thought to be long-dead. Overcoming 2,000 years of Roman-imposed diaspora, the Jewish hope of regathering in their own Promised Land came to fruition. This hope — uttered every Passover as the prayerful, “next year in Jerusalem” — did not spring merely from the wishful hearts of dispersed Jews. It echoed the prophetic promise of God repeated throughout the Old Testament.

The dispersal of the Jews was so complete, their persecution and oppression so incessant, and their existence so resented by the Gentile world, that any prophecy for their regathering seemed too far-fetched to be taken literally. And so, spurred toward anti-Semitism by misguided leaders and ignoring the clear teaching of Scripture, even the Church eliminated the Jewish people from its understanding of God’s plan for humanity. That is not to say that every Christian expressed anti-Semitism or embraced Replacement Theology, but the overwhelming majority of the Church did so — to its great discredit.

But God’s promises are “Yes, and Amen.” (2 Corinthians 1:20). And so, His promise to Abraham and his genetic descendants remains in effect to this day. Not because the Jews are deserving of blessing; not because they were or are a mighty nation or a numerous people; not because they have merited God’s special providence. He made that point abundantly clear in Ezekiel 37:22-28, right before He led Ezekiel out to a valley full of dry bones.

Can These Bones Live?

I’ve long considered how I would have answered God’s question had He spoken to me, “Son of man, can these bones live?” (Ezekiel 37:3). With two engineering degrees and steeped in modern rational thought (let alone a smattering of biological and medical learning), I would have answered, “No way! They’re dead, dried up, and disjointed.” But Ezekiel demonstrated far more wisdom in his recognition of God’s unlimited power. He responded, “O, Lord God, You know.”

God did know. He knew that regardless of outward appearance and beyond human comprehension those dead bones would come to life based on the utterance of a prophetic word. Just like the centurion who recognized Jesus’ authority to send word by another and have His commands obeyed, God’s authority could be pronounced through Ezekiel’s deliverance of that prophetic word. As Ezekiel spoke, those bones rattled and rolled together — rocking Ezekiel’s world. And that was just the preview of a greater fulfillment to come!

God explicitly said that the dry bones represented the whole house of Israel. He knew that a point would come when they would say, “Our bones are dried up and our hope has perished. We are completely cut off” (Ezekiel 37:11). But God promised to open their graves, regather them as His beloved people, and restore them to the land of Israel.

For almost 19 centuries, the thought of Jews returning to the God-forsaken Land of Israel seemed beyond belief — to Gentile and Jew alike. And make no mistake, the Land was forsaken. God’s curse lingered on the Land throughout the millennia of the Jewish exile — as foretold in Ezekiel 33:28-29 and described by witnesses like Mark Twain (in The Innocents Abroad). But a small handful of Christians clung to the belief that God meant what He had said. And, in the recesses of their heart, Jews dared to hope, maybe, next year in Jerusalem.

In the late 1800s, God motivated Christian Zionists and Jewish dreamers to dare to aspire for the establishment of a Jewish nation in the Land of Israel. The idea did not inspire mass enthusiasm. Too many Christians remained uncaring about the fate of the Jewish people and were generally hostile to them, given the undercurrent of anti-Semitism flowing through the Church. Jews had acclimated to live in places like Germany and Poland and Russia, and saw no need to uproot once again to stream back to a desolate wasteland on the western shore of the Mediterranean Sea. And, while not yet incited toward rabid hatred of Jews, the Muslim world was generally antagonistic toward the Jews.

The events of the early 20th Century set the stage for Ezekiel’s prophecy to be fulfilled. Great Britain’s government expressed its intention to support the establishment of a Jewish State through the Balfour Declaration — largely because of official gratitude toward the Jewish scientist who was instrumental in the Allied victory in World War I. (That man, Chaim Weizmann, would later become the first president of Israel.) And, upon actually winning the war, Great Britain was given mandatory authority over the area known at the time as Palestine — the degrading name given to the Land of Israel by the Romans in the first century AD.

While the wheels of geopolitics were turning, the Jews were being motivated to leave their homes and make aliyah (a Hebrew word for immigration that means, “going up”) to Israel. Simply put, those who survived the Holocaust in Europe realized that no degree of assimilation could guarantee their security in Gentile nations. Many thousands of them determined to go home to Eretz Yisrael — the Land of Israel.

Following a political drama in the newly-formed United Nations, the Jews of Palestine were given international sanction to declare a state. So, on May 14th, 1948, the modern state of Israel was born. As soon as David Ben Gurion declared Israeli independence, five Arab armies launched an all-out attack, declaring their intention to annihilate the Jews. Miraculously, the fledgling Jewish state repelled those numerically superior forces and established a ragged but defensible border.

The dry bones had come out of their graves and stood up in their own land, Israel — just as God promised in Ezekiel 37:11-13.

Afflicted, But not Crushed

The next eight years brought almost constant terrorist activity. Israel repeatedly engaged in open conflict with its neighbors, only to emerge victorious time and time again. Embarrassed by an unending string of defeats, Arab leaders decided to antagonize as they awaited another opportunity to attack.

By the 1960s, a populist general rose to power in Egypt. President Gamiel Nassar fanned the flames of Arab nationalism and declared himself the head of the United Arab Republic. He rallied restless Arabs throughout the Middle East with his impassioned hatred for the “Zionist entity” to his north. He boasted and blustered until he was able to secure military alliances with Lebanon, Syria, Iraq, Saudi Arabia, and Jordan — effectively surrounding Israel.

A Renewed Threat to Israel

In early 1967, Nassar repeatedly broadcast his intention to destroy Israel. Some historians claim that his vitriolic speeches were meant simply to arouse and inspire the “Arab street.” Whether through intention or blundering, Nassar propelled his United Arab Republic toward war. On May 16th, Nassar ordered the UN Emergency Force (stationed in Sinai to ensure Arab-Israeli compliance with an UN-brokered 1956 cease-fire) to withdraw. In a cowardly act of diplomatic capitulation, UN Secretary-General U Thant acquiesced to this demand immediately.

On May 22nd, Nassar blockaded the Strait of Tiran — Israel’s only access to the Red Sea and the conduit for all of its oil. The world has long recognized such an aggression as a “casus belli” — a justification for war — but Western nations, including the United States, urged Israel to restrain itself. Making matters worse, Nassar mobilized his forces and staged them in the Sinai, substantiating his stated intention to march north through the heart of Israel.

Israel responded by mobilizing its reserves — an action guaranteed to cripple its own economy within short order. Some in Israel’s notoriously divided government wanted to wait for Western relief from the mounting pressure, while others argued that the nation could be annihilated while the West dithered. With the survival of Israel and its millions of citizens at risk, Israeli leaders authorized a daring plan to control the ensuing battle — Operation Moked (“Focus”).

On June 5th, waves of Israeli Air Force planes launched toward Egypt — leaving only 12 aircraft in reserve to defend the skies over Eretz Israel. Following carefully crafted attack plans based on painstaking intelligence, the Israelis caught the Egyptian Air Force by total surprise. Within a matter of hours, over 300 Egyptian aircraft were destroyed, versus only 19 Israeli planes.

Facing a military disaster, Nassar goaded his Arab allies into joining the fray. Syria, Jordan, and then Iraq attacked Israel — leading to devastating counterblows by the Israeli Air Force. In short order, the Israel victory in the air turned into a rout on the ground.

This landmark war lasted six days and is remarkable still today for its brevity. It ended when the Arab nations finally admitted their humiliating defeat and begged the United Nations to impose a ceasefire. Although known as the Six-Day War, an Indian Air Force eyewitness later testified, “The war was actually won by Israel in the first four hours of Monday, June 5th, 1967.”

“The Old City of Jerusalem is in Our Hands”

From a prophetic perspective, the Six-Day War was significant. That war demonstrated the power of Zechariah’s prophetic word:

“In that day I will make the clans of Judah like a firepot among pieces of wood and a flaming torch among sheaves, so they will consume on the right hand and on the left all the surrounding peoples, while the inhabitants of Jerusalem again dwell on their own sites in Jerusalem.” – (Zechariah 12:6)

No military analyst would have anticipated the incredible victory the Jewish nation achieved over its numerically superior foes. But God had promised that once regathered to the Land of Israel, the Jewish people would never again be uprooted.

The other significant prophetic event occurred in the final hours of the war. With a ceasefire looming, Israel’s political and military leaders authorized IDF paratroopers to rush into Old Jerusalem and reclaim Israel’s ancient capital from the Jordanian occupiers. Defense Minister Moshe Dayan expressed the miraculous fulfillment of Jewish hopes and dreams when he announced, “The Old City of Jerusalem is in our hands.” IDF Chief Rabbi Shlomo Goren also understood the prophetic significance of the moment. He rushed to join his paratroopers at the Western Wall, blew a shofar, and said, “I proclaim to you the beginning of the Messianic Age.”

Demonstration of God’s Faithfulness to His Promises

Since 1948, Israel has had to fight massed conventional armies, waves of Palestinian terrorists, international scorn and condemnation, and Satanic movements like “Boycott, Divest, and Sanction” (ever popular on American college campuses). Israel’s ongoing victories against its hate-inspired foes demonstrate God’s faithfulness to His promises. As recorded in Amos 9:15:

“I will also plant them on their land, and they will not again be rooted out of their land which I have given them,” says the LORD your God.”

Students of Bible prophecy know God promised that Israel would return to its ancient homeland, reestablish itself as a nation, and never again be removed. We also know that when Jews once again occupy Jerusalem, the King of kings is poised to return at any moment.

The air campaign that launched the Six-Day War fifty-five years ago was called “Operation Moked” (Focus). As Christians, our focus is ever and always on Jesus Christ. With Bible prophecy in mind, Peter also encourages us:

“Therefore, with minds that are alert and fully sober, set your hope on the grace to be brought to you when Jesus Christ is revealed at His coming.” – (1 Peter 1:13)

Just like Operation Moked caught the Egypt Air Force unprepared 50 years ago, Jesus’ arrival will come as a total surprise to those who are unaware, unprepared, and unalert. Make sure that you are ready when the trumpet sounds!