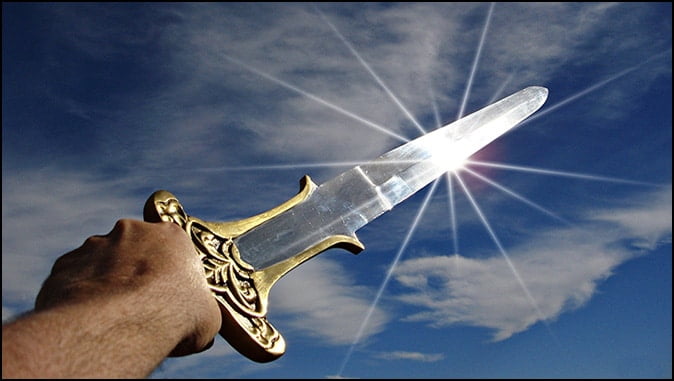 Division and the Two-edged Sword
By Terry James

The monumental film produced by Cecil B. DeMille, The Ten Commandments, continues to carom within the memories of those still living who first saw it on the silver screen. The movie continues to be shown around Christian holidays, and it’s still a magnificent production, even on the screens of televisions and laptops.

Who could forget the very finger of God—as portrayed in the film as lightning from Heaven—carving the Ten Commandments for conducting life on this fallen planet upon the tablets of stone?

While Moses fearfully cowered, scarcely looking up, the mountainside exploded as the tablets were cut out with heavenly, surgical precision. Charlton Heston, as Moses, then very tentatively picked the tablets from their place and followed God’s directive to return to the Israelite people below the mountain where he stood. They were greatly engaged in sin, the Lord told Moses.

Moses was heartbroken to see the people in such a debauched state. He was more angered than heartbroken, however. He screamed at the people for their evil doings, shouting, “Choose you this day whom you will serve!” He called for those who were with Him to come to his side.

Moses then divided the masses of people, many of whom hurriedly moved, terror-stricken, to his side. Others remained defiant and stayed where they were in order to continue their debauchery and golden calf worship.

Moses’ anger arose to an even greater level; he raised the tablets carved by the hand of God and flung them at the crowd of unbelieving rebels. We remember how the earth began to shake and crumble in front of the defiant mass of people. The ground gave way beneath them and swallowed them all.

The Lord had used His man, Moses, to separate those who believed from those who would never believe, no matter what the circumstances. Even when they had seen the magnificent hand of God divide the Red Sea so they could pass through, and had witnessed the pillar of cloud by day and the pillar of fire by night to guide them, they wouldn’t believe. That is, they might have head knowledge, but not heart/spirit knowledge of who God is. Neither did they want to know.

There is a division taking place even as I write this and as you read it. And, God is again using a man, I believe, to divide those who will believe from those who will not believe in His way of comportment for humankind His only way for the salvation of the souls of lost mankind.

Donald J. Trump—certainly no Moses, in character, and not having had the Commandments handed him directly from God’s throne—nonetheless is chosen. In the vein of Nebuchadnezzar and Cyrus, he is chosen to separate the wheat from the tares, the sheep from the goats, so to speak.

He has been a divisive figure in America’s political realm and culture like no other president, with the exception of Lincoln. And Lincoln was chosen, but obviously for a different purpose, although one as important in the sense of human freedom.

Trump’s purpose, in my view…well…“trumps” that of Lincoln in advocating for Israel, anti-abortion, and constitutional rights with regard to religious freedom.

Now, I fully realize that unless your view is biblical and from the point of view that God is hands-on and not existential, you see as foolish our believing that these tremendous upheavals of culture we have endured stem from spiritual chaos. I understand that in your thinking, the so-called revolution represented by the likes of BLM and Antifa and the raging hatred against Trump and our wanting things to be back to America as founded is righteous revolutionary action.

And this is where the division is at the moment. It is a schism running smack down the middle of the United States of America. There are decisions to be made upon the political spectrum, and people for the most part have made it.

But it is the spiritual elements within the American cultural and societal dividing line—that national earthquake fault line where lies the true danger in these troublous times. It is God who defines where to stand on either side of that fault line.

Now, I am fully aware that the story of Moses coming down from the mountain, finding the evil, and acting as God’s hand of judgment in slamming the tablets of Law into the fault line of that time involved His dealing with His chosen people, Israel. But His dealing with Israel, the Bible tells us in total context of His making Israel His chosen nation, was to place before the eyes of the world a prototype people. These are the people He chose to serve as example for the rest of the world’s nations to, in general, comport themselves. So in that regard God’s righteous anger still arises—and against all peoples—when evil reaches its final stages.

There comes a time that a dividing line is drawn—an earthquake fault line of sorts is defined for the whole world to see.

It is my contention that that moment might be upon us now. There is a distinct line of division down the middle of America at present. God has dealt with Israel and America in special ways, I believe. The two nations’ close links since Israel’s rebirth—indeed, America’s amazing history of birth and extraordinary achievements as apex nation of history—is nothing short of Heaven-directed.

So the chaos, created by the rebels who want to do what is right in their own eyes—like the golden-calf-worshipping folks of antiquity—has great relevance, I’m convinced. The Lord of Heaven is deliberately making manifest the division between those who will come to Him and those who are diametrically opposed to His governance.

God’s Word has the only TRUTH that exists. In that love letter to mankind, the Creator has given all that is needed to go through life in the way He has prescribed. It is a blueprint for life more abundant, and full of light to illuminate dark pathways. Jesus is that Light of the world. He is also the Living Word. Here is what that Word tells us about division in God’s holy view.

“For the word of God is quick, and powerful, and sharper than any two-edged sword, piercing even to the dividing asunder of soul and spirit, and of the joints and marrow, and is a discerner of the thoughts and intents of the heart.” (Hebrews4:12)

Millennia and DNA separates those people of Moses day from our time. But God’s ways change not in the ultimate sense. We can take the God-inspired words of Scripture and apply them at this very hour. There is a separation coming. The spiritual fault line and the historical dividing line are before us. It is time to choose.

“And if it seem evil unto you to serve the LORD, choose you this day whom ye will serve; whether the gods which your fathers served that were on the other side of the flood, or the gods of the Amorites, in whose land ye dwell: but as for me and my house, we will serve the LORD.” (Joshua 24:15)