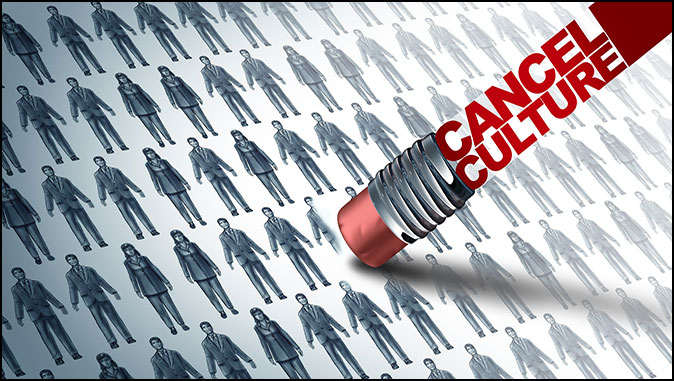 America’s wayward society has seen the rise of yet another threat to Christian conviction in recent years — the Cancel Culture Movement. Its rabid inclination to shut down anyone who disagrees with the shifting ideology of the day (or hour) leads to hateful denunciation, economic pressure, and outright ostracization.

This pattern has become obvious on social media but has also morphed into shamelessly publicized agendas to shut down anyone who runs afoul of a leftist worldview. Liberal campuses that once championed free speech are now radically denouncing this First Amendment right. Even more concerning is the growing clampdown on Judeo-Christian values by monopolistic Big Tech, major media, and government officials.

Nothing New Under the Sun

This development has been shocking to Americans who are used to living in a free society open to a marketplace of ideas. The adage, “I disapprove of what you say, but I will defend to the death your right to say it,” has given way to a demand never to be offended. This all-out attack on Truth is really a rerun of a very old theme.

When the apostles began to preach the gospel, Jewish authorities and Roman overlords alike endeavored to shut them down. Jewish rulers and elders first called Peter and John before their Council and commanded them not to speak or teach at all in the name of Jesus. The apostles answered them saying, “whether it is right in the sight of God to give heed to you rather than to God, you be the judge; for we cannot stop speaking about what we have seen and heard” (Acts 4:18-20).

The High Priest and the Sadducees then threw the apostles in jail, hoping to snuff out their message through incarceration. But an angel of the Lord opened the gates of the prison and sent them out to keep sharing the gospel. They were rearrested and hauled before the Council again. The High Priest repeated his command not to teach in the name of Jesus. Peter captured the sentiment of his fellow disciples when he replied, “We must obey God rather than men” (Acts 5:27-29). Dismayed by the apostles’ confident display of strength, the Sanhedrin flogged them, ordered them once again not to speak in the name of Jesus, and released them.

The Bible demonstrates that throughout the early Church Age there were people who wanted to silence Christians, even to the point of killing them to shut them up. Stephen first experienced the murderous outrage of elites unwilling to hear his message of truth. Cut to the heart by his testimony, they lashed out and stoned him — canceling his voice altogether.

Ironically, Christianity has always been counter-cultural. Christian love and mercy were strange ideas to the Romans and to Jewish leaders. Christian affirmation of God’s uncompromising holiness and sacrificial love was a radical idea that turned the ancient world upside down.

The Roman Empire initially tolerated Christianity as merely one of the religions observed by conquered peoples. But they began to crack skulls when they realized that Christians would not honor Roman emperors as gods.

The Romans went to great lengths to eradicate Christianity. Under Nero, Christians were used as torches lighting up Caesar’s gardens. They were thrown to hungry lions and cut down by gladiators in the arenas — to the cheers of bloodthirsty mobs. Talk about an extreme case of living in a cancel-culture!

In recent centuries, we have witnessed a unique episode of human history — a long period when Christianity was the dominant faith throughout Western society and persecution was largely limited to dark corners of the globe.

What is unprecedented now is the widespread Christian persecution throughout the formerly Christian West. The cultural elites have declared an open season on Christianity and Christians. Why? Because anyone who stands on the Word of God cannot endorse the immorality our society is rapidly embracing.

Christians are the butt of jokes and are ridiculed throughout the media. They are kicked off social media platforms or ghosted or doxed. Bible-based beliefs are declared unworthy of mainstream consideration. And the pressure is mounting on ministries like Lamb & Lion to tone down our Gospel and prophetic content — something we will not do.

We could argue (and we do) that such perils are still very mild compared to the terrible persecution Christian brothers and sisters are enduring in places like Nigeria and North Korea and any place where Islam has cast its dark shadow. But the threat is rising — and the majority of Americans are taking their cues from a depraved culture that no longer even tolerates Christian faith.

The writer of Hebrews wrote these emboldening words: “Let us run with endurance the race that is set before us, fixing our eyes on Jesus, the author and perfecter of faith, who for the joy set before Him endured the cross, despising the shame, and has sat down at the right hand of the throne of God” (Hebrews 12:1-2).

Then, in verse 4, the author makes this observation, “You have not yet resisted to the point of shedding blood.” He’s not suggesting that we shed other people’s blood and so incur legitimate prosecution. Instead, he’s putting our sense of persecution in perspective. Even now, how many Christians in this country have been persecuted, imprisoned, beaten, and endured violence to the point that our own blood is shed?

Some Christians have indeed been fined and jailed for their faith, and there will certainly be many more in the years ahead. Attempts will grow to ostracize and silence Christians, rob them of their livelihood, and shut down our churches. I absolutely believe the open, violent persecution of Christians will inevitably happen in this country.

So, the question left to us is: What are you prepared to endure for the cause of Christ?

Daniel said that when the Antichrist spews wickedness in the end days, “the people who know their God will display strength and take action” (Daniel 11:32). The spirit of antichrist is already here (1 John 4:3). For too long Christians have been like the proverbial frog in a pot — complacently idle as the temperature rises. Now that the water is almost boiling, we can no longer tolerate the rise of ungodliness — in our homes, our churches, or our society. We all need to wake up and contend earnestly for the faith! (Revelation 3:1-3 and Jude 1:3).

I pray that each of you will resolve to display strength and take action. Prepare your heart for whatever the Lord has in store for us. As Paul said, “put on the full armor of God, so that when the day of evil comes, you may be able to stand your ground, and after you have done everything, to stand” (Ephesians 6:13). Then regardless of how the world mistreats us we can rejoice, as the apostles did, that we are considered worthy to suffer for His name.