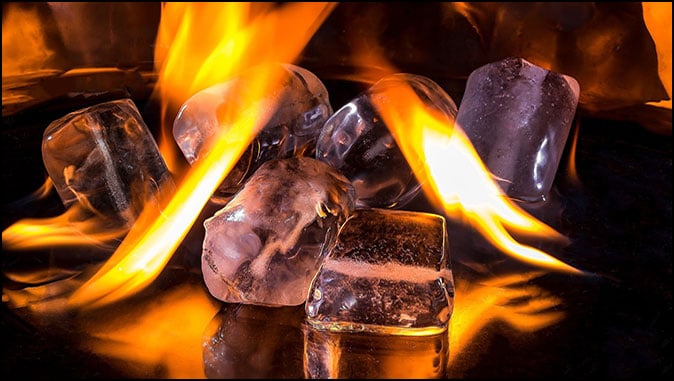 Cool in the Fire
By Hal Lindsey

The turmoil surrounding this election keeps being ratcheted up. People on both sides see the future of America and the world hanging in the balance. Both sides see the other as dangerous. Such turmoil is not unique to the United States.

I’m not talking about the justness of their causes. That varies. What I want you to see is the incredible level of unrest and agitation reaching across the world. People are outraged and afraid. They feel that evildoers control many of the world’s governments. And in too many cases, they are right. These are the days the prophets predicted. We should not be surprised at the deception going on in the world.

How should we react to the evildoers? There are many positive responses to that question, starting with the vote. If you are a voter in the United States, you have amazing, planet-wide influence. Do something positive to make good changes or to hold back evil ones. But whatever you do, do not cower in fear. Fear is the driving force of much of the destruction going on in the world right now. We see the principle in Psalm 37:8. It says, “Cease from anger and forsake wrath; Do not fret; it leads only to evildoing.”

The word “fret” is a translation of the Hebrew, “charah.” It means to glow or blaze up in anger or jealousy. The scripture here is clear. This kind of fretting leads to evildoing. And we see this kind of evildoing all over the world at this moment in history.

The first verse in Psalm 37 gives us this clear instruction. “Do not fret because of evildoers.”

Are there evildoers working for the candidate you oppose? Does the communist party in China seem filled with evildoers? Have evildoers taken political control over much of the world? God says not to fret about evildoers because that kind of fretting leads to your own evildoing, and then to your own undoing.

Even when their actions are outrageous, do not be outraged. Keep your poise Stay calm. Be cool. Trust God. A lying media or a corrupt Washington establishment might be frustrating, even agonizing. But God says not to fret over them.

In God, we are the ones with real power, so let us act in confident joy rather than worry or fear. This is a good time to read all of Psalm 37… and then read it again. Do not fret because of evildoers. Commit your way to God. Trust, delight, and rest in Him. Let Him be your “strength in time of trouble.”