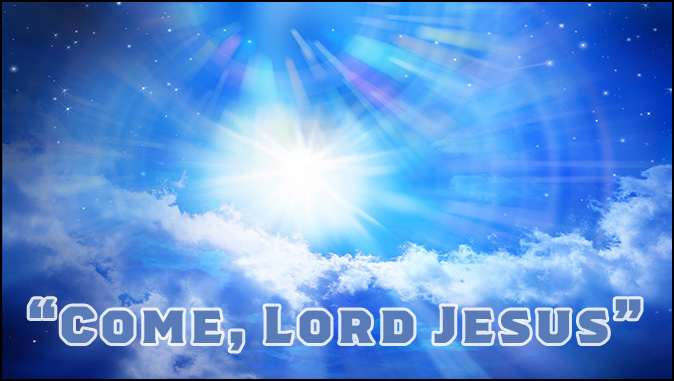 This phrase, imploring that Jesus intervene in a less-than-pleasant moment of the life of a believer, used to be spoken in a sort of light-hearted way — i.e., the person saying this used the words to express their frustration with the way something was going they would rather not face.

One heard, “Come, Lord Jesus,” once in a while, but for the most part, it was issued with a grimace, then a smile, indicating that things weren’t really so grim as to want the Lord to rescue them. At least that is my observation, thinking back over the years.

I guess some would accuse that this was, when used in such a light vein, a way of using the Lord’s name in vain–something the Bible indicates is forbidden. Perhaps I should view it that way, but just never did, believing that His coming at any moment would be a glorious thing, not something to wish for that should be criticized as sinful. At any rate, shouldn’t we want the Lord to come back? We’re told in Scriptures like Luke 21:28, Mark 13:37, and Titus 2:13 to be looking for, watching for, the Lord coming for us.

Worry and conjecture over whether such light usage of the phrase, ”Come, Lord Jesus” is wrong no longer applies, because now there is no doubt about its usage. The appeal for Jesus to intervene in our lives is genuine in every respect.

If I put into this commentary every case lately in which I’ve received an email that uses the phrase, “Come, Lord Jesus,” in different ways, the article would be lengthy indeed. These days, Christians, I’ve found, are genuine in asking the Lord to rescue us out of this spiritually darkening — dare I say, insane — world.

American Christians have been for years, for the most part, spoiled to things going along pretty well without challenge to their belief in Christ. There has been very little persecution compared to that suffered by believers of other nations — China, for example. Those believers might not recognize much difference in the level of troubles they’re suffering because of their faith. Things might be getting worse, but their plight hasn’t changed significantly in terms of contrast.

By that, I mean that we here in America have seen things go from relatively smooth, with little challenge and no persecution to speak of, to tremendous changes and growing persecution for our belief in Christ as the only way to salvation.

We’ve seen the country’s attitudes change from America being called a Christian nation to having a president say we are not a Christian nation. We’ve watched a pastor of a president asking God to damn America, using the term in a way that takes the Lord’s name in vain in an obvious, overt expression.

We’ve endured the corruption of everything we thought secure, the US Constitution and its framers — the founding fathers — made out to be, through rewritten history, among the most evil documents and most evil men in human history.

We’ve witnessed our nation fight to win freedom from slavery for African Americans, with one party being at the helm of government that won the war and freed the slaves. The other party, who mostly advocated holding slaves, who lost that Civil War, now calls the political party that freed slaves guilty of racism.

The lies from the father of lies run rampant, even mocking God’s prescription for living righteously. For example, the homosexual lobby, although a small percentage of the citizenry, dominates the mainstream media narrative in proclaiming it is as righteous a lifestyle as any.

That same culture and media now makes out God to be a liar by saying male and female don’t have to be what they came into the world to be. A boy can be a girl, or vice-versa. It is a choice, not a biological fact of birth, as directed by God.

And, the same media and culture proclaims it is not only okay, but preferable, to murder children while in the womb or even after birth in some cases, as a matter of a woman’s right to choose whether her baby lives or dies.

So, in America, the contrast is stark. We have seen the evil cesspool of wickedness infect our culture and society in most every way possible, unthinkable only a few decades ago. That is why we say, and legitimately so, “Come, Lord Jesus!”

And it all means that the Lord Jesus must surely be about to step out onto the clouds of glory and say, “Come up here!”

“And when you see all these things begin to come to pass, then look up and lift up your head; for your redemption draweth nigh.” – (Luke 21 28)

“He which testifieth these things saith, Surely I come quickly. Amen. Even so, come, Lord Jesus.” – (Revelation 22: 20)