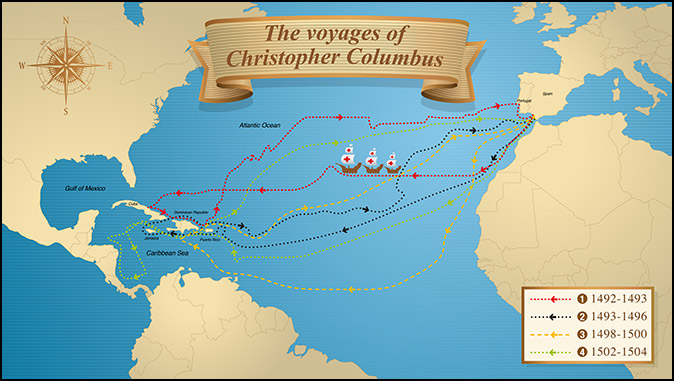 Columbus and the Second Coming
By Hal Lindsey

We just celebrated what may be one of the last Columbus Day holidays ever. Christopher Columbus was a complex man — neither a perfect hero nor a monster. No matter what you think of him personally, it is impossible for us to fully fathom his impact on world history. When he arrived in the Bahamas on October 12, 1492, two worlds collided, and neither of them would ever be the same. His voyage led to unspeakable suffering and injustice, but also to staggering levels of progress in an amazing number of human endeavors. But all that is small compared to one of his stated purposes. I’m not talking about finding a western sea passage from Europe to Asia. I’m talking about his desire to help facilitate the return of Jesus Christ.

According to noted historian Carol Delaney, author of Columbus and the Quest for Jerusalem, “Everybody knows that Columbus was trying to find gold, but they don’t know what the gold was for: to fund a crusade to take Jerusalem back from the Muslims before the end of the world. A lot of people at the time thought that the apocalypse was coming because of all the signs: the plague, famine, earthquakes, and so forth. And it was believed that before the end, Jerusalem had to be back in Christian hands so that Christ could return in judgment.”

Columbus believed ardently in the Second Coming of Jesus, but the Catholic Church taught that it had replaced Israel in God’s plans. That meant Christians, not Jews, must control Jerusalem for the ancient prophecies to come true.

If, on the other hand, you look at the Bible as saying exactly what it means, you come to a different conclusion. If you believe God will keep His word to the people to whom He gave it, you know that Israel must control Jerusalem for the prophecies to be fulfilled. God made specific promises to the physical descendants of Abraham, Isaac, and Jacob. And He will keep His word.

Let’s say you promise to buy someone a new car. Would your promise be fulfilled if you chose to give that car to someone else? Of course not. Romans 11:1 (NKJV) says, “Has God cast away His people? Certainly not!”

Look at Jeremiah 31:37 in the New Living Translation. “This is what the Lord says: ‘Just as the heavens cannot be measured and the foundations of the earth cannot be explored, so I will not consider casting them away for the evil they have done. I, the Lord, have spoken!’”

Many Bible scholars of the past were sure the Church replaced Israel because neither Judah nor Israel existed as a real nation from 115 AD until 1948. And they were sure it never would exist again. No nation had ever disappeared for almost 2,000 years, and then suddenly reappeared with its bloodlines intact. But that’s what happened to Israel. God said He would remake Israel as a nation with the actual descendants of Abraham, Isaac, and Jacob. And He did.

Columbus got some of his information confused. But it’s exciting to know that Christian men and women down through the centuries were looking for the return of Jesus. It’s even more thrilling to realize that we live in the time when there are not just a few signs here and there, but a convergence of signs including the rebirth of Israel and their reacquiring of Jerusalem.

God keeps His word. In the case of Israel’s rebirth, He kept His word in something huge and seemingly impossible. That should give us confidence that He will also fulfill His promises to us — even when they seem impossible. Never forget what Jesus said in Matthew 19:26. “With God all things are possible.”