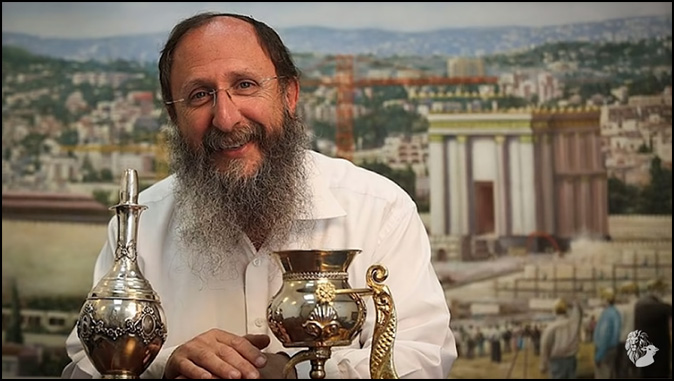 Tim Moore: Dr. Randall Price is a gifted archaeologist, a professor of Biblical Studies at Liberty University, and a frequent guest on our ministry’s television program Christ in Prophecy.

Nathan Jones: Dr. Price, I’m always excited when we have you on our Christ in Prophecy television program because you bring such an expertise on the subject of archaeology and Bible prophecy. Many of the papers that I write usually have your name in the footnotes somewhere.

In talking with many of our show’s guests over the years, they all say that Israel is God’s prophetic time clock. In other words, if we look to Israel then we can understand God’s end times timeline. As you are the expert on all things Israel, tell us, how do you see the inevitable construction of the Third Temple coming along?

Randall Price: Israel serves as what’s known as the “super sign” for the end times because when we look at all of the events that are going to happen in the future, Israel stands as the central platform for everything that is going to happen. Israel provides the stage so that every time we dance, so to speak, we should be looking to see how the Jewish people are being prepared for the return of the Messiah.

Such an event seems so far from reality today, considering the occupation of the Temple Mount. That tiny bit of land creates constant controversy, for Islam has been the dominant power in Jerusalem for 1,300 years.

In the last 30 years or so, since the Temple Movement came about in Israel, we have different groups preparing the Third Temple vessels halachically, which means “correct according to Jewish Law,” just as they used to be in the Second Temple, and not just for show, but for actual use. Blueprints have been made for the Temple — functioning blueprints — that have been around for some time.

Concerning the materials that will be used to build the Temple, people have been wondering where the Temple Institute is going to get these resources. Fortunately, Jerusalem is built on limestone and so there are quarries all over the area. You can see Second Temple period quarries, but there are also other era quarries.

Then there’s the money. There are those who claim with certainty that money is not a problem for they have enough people donating. The Temple Institute claims they have one donor who could finance the entire building of the Temple all by himself if needed. So, there is no problem when it comes to acquiring financial resources and building supplies.

Nathan Jones: The Kohanim have started training as well, right?

Randall Price: Yes, the Kohanim have been training for quite some time. These are the priests who attend their priestly schools such as the Torat Kohanim and the Temple Institute trains some as well. There’s also a Davidic School of Music. They are preparing both the Leviim and the Kohanim for services. All of this has taken a lot of time. Candidates for the high priest’s position have been offered, and they even have one guy now who seems a good contender.

The Sanhedrin has been revived as well. This is the same Sanhedrin body that presided over the laws of the Temple. They haven’t existed for centuries because there hasn’t been a functioning Temple, but now in preparation for the hope that there will soon be one, a new Sanhedrin has been convening.

Archaeologists have identified the right spot to build an altar outside of where they will rebuild the Temple. A red heifer is needed for the purification rites of the Temple. So many things have to be done in order to create a fully functional Third Temple.

The very fact that these preparations are not only being discussed but that the Jewish people are actually preparing these things is historic. The Jews are even offering sacrifices, though not on the Temple Mount, but near the Temple Mount. All of these things related to restarting the Temple worship that has been happening tell us that we are getting closer all the time to the return of the Messiah.

Tim Moore: But, to be clear, we as Christian believers do not look to the rebuilding of the Temple as the next prophetic sign, though they are part of end times events? We instead are looking for Jesus Christ, because only during the Tribulation after the Rapture of the Church do any of these events related to the rebuilding of the Temple come to pass? People will focus on finding a red heifer or the collection of building blocks, but our emphasis is that while these signs are happening we still should not be distracted in looking for Jesus Christ?

When you and your family enjoy Thanksgiving, you know that Christmas is coming right around the corner. Some people put Christmas decorations out on Thanksgiving, but even if they didn’t, you would still know that Christmas is coming because Thanksgiving was here and Christmas follows that holiday. This whole holiday illustration simply means that if we are seeing these events related to Judaism that are going to be part of the Tribulation period happening, and that Jesus Christ comes for His Church before that period, then how near must we be to the time of Christ’s coming?

Nathan Jones: People ask our ministry if they should give money towards the building Third Temple, but isn’t technically the Third Temple the Antichrist’s Temple because he will desecrate it halfway through the Tribulation? The Millennial Temple that follows is actually Christ’s Temple, is that correct?

Randall Price: Well, I wouldn’t call the Third Temple the Antichrist’s Temple just because he desecrates it. It’s still called the Temple of God in 2 Thessalonians 2:4, so because of this passage, the Third Temple still remains a legitimate Temple, just that the Antichrist desecrates it at the midpoint of the Tribulation. After all, you cannot desecrate something that is not already considered holy.

However, I wouldn’t suggest that people give money to this cause as this is strictly a Jewish concern. The people who take that money are opposed to our brothers and sisters who are Jews who believe in Jesus, and they persecute them. I don’t want to support people who turn around and use my money as ammunition against our own brethren. We can support the building of the Third Temple in terms of understanding that it moves end times events in God’s direction.