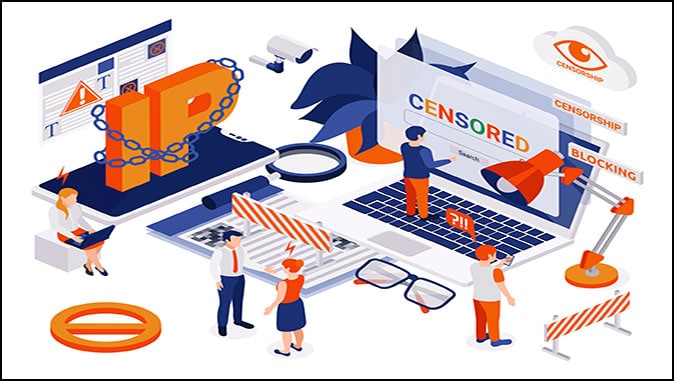 In an August 2019 article titled “Silicon Valley Censorship and the Coming Global Police State,” I wrote the following: “If you love freedom and liberty, recent actions from high tech companies should have you worried. In pursuit of profit, the mega companies of Silicon Valley have created products that invade user privacy. And they easily cave to the demands of totalitarian governments.” Unfortunately, recent events reveal the United States is now among those totalitarian governments.

On July 15, White House Press Secretary Jen Psaki announced White House officials were “meeting with social media platforms” and had “increased disinformation research and tracking.” She said the administration is “flagging problematic posts from Facebook that spread disinformation” and working to “connect doctors and medical professionals who are popular with their audiences with accurate information” so as to “boost trusted content.” If you don’t believe me, watch her press conference here.

This is a blatant violation of every American’s First Amendment right to freedom of speech. Who determines what is or isn’t “disinformation?” In her words, the government does. And who determines what is or isn’t “accurate information” or “trusted content?” Again, in the eyes of the Biden Administration, it’s government. They are the arbiters of “correct” speech. It’s their job to “protect” you from the evils of errant thoughts.

As if this weren’t bad enough, the U.S. Surgeon General followed up with his own lecture on the dangers of free thought and how the biggest threat to our health and safety is our stubborn unwillingness to agree with him. According to Dr. Vivek Murthy, “We live in a world where misinformation poses an imminent and insidious threat to our nation’s health. Health misinformation is false, inaccurate, or misleading information about health according to the best evidence of the time. And while it often appears innocuous on social media apps, on retail sites or search engines, the truth is that misinformation takes away our freedom to make informed decisions about our health and the health of our loved ones.”

He goes on, “Modern technology companies have enabled misinformation to poison our information environment with little accountability to their users. They’ve allowed people who intentionally spread misinformation – what we call disinformation – to have extraordinary reach. They’ve designed product features such as like buttons that reward us for sharing emotionally charged content, not accurate content, and their algorithms tend to give us more of what we click on, pulling us deeper and deeper into a well of misinformation.”

Any freedom loving individual should find these statements both chilling and frightening. If the Surgeon General thinks disinformation has invaded the public discourse, he’s free to combat that disinformation with facts and persuasive arguments. The government has no right to censor its critics. Again, if you find all this hard to believe, watch the Surgeon General’s comments for yourself by clicking here.

According to the White House and the Surgeon General, freedom of speech is such a dire threat, social media platforms should collude with government to delete any posts or content the Biden White House deems “disinformation.” Facebook, YouTube, Twitter, and other social media platforms are more than happy to comply, and their crackdown on the evils of free speech doesn’t end with public postings.

According to Politico, “Biden allied groups, including the Democratic National Committee, are also planning to engage fact-checkers more aggressively and work with SMS carriers to dispel misinformation about vaccines that is sent over social media and text messages.” This means government authorities might “fact-check” future private text messages between you and your friends. Imagine being in the middle of a phone call with a friend, and the government cuts off your call because the two of you are discussing “disinformation.” Most people would be outraged. Yet, that’s exactly what the government is doing with this social media disinformation censorship campaign.

Free Speech is Under Assault

People have warned about this assault on free speech for years. For instance, in July 2020, over 100 writers, academics, and political and cultural activists published an open letter in Harper’s Magazine on the topic of justice and open debate. The signatories were a diverse list of well-known celebrities, including J.K. Rowling, Margaret Atwood, Noam Chomsky, Salman Rushdie, Malcolm Gladwell, and Gloria Steinem. In their letter, the authors pointed out “the free exchange of information and ideas, the lifeblood of a liberal society, is daily becoming more constricted.” They wrote the letter because the current cancel culture narrows “the boundaries of what can be said without the threat of reprisal.”

College campuses used to be open forums for free speech and radical ideas. Today, they’re ground zero for the assault on free speech – a place where totalitarians silence all dissent. This dictatorial impulse is spreading from the college campus to the public discourse, leading to censorship both online and offline – from social media platforms to local school board meetings. The willingness of so many people to suppress free speech foreshadows the rise of a dictatorial state. Widespread support for cancel culture and the demonization of opposing points-of-view set the stage for an oppressive government willing to use violence to enforce its edicts. Ironically, many of the people who claim to be anti-fascist are the exact same people who support social media censorship of any ideas they don’t like.

All this is a threat to the very foundations of human freedom and liberty. In an age when social media dominates public discourse, access to these platforms is vital to get a message out. Don’t believe me? Try getting your message out to a large audience without using Facebook, Twitter, Google, Apple, Amazon, YouTube, or Netflix. It’s nearly impossible. If they can de-platform the sitting President of the United States (which they did to Donald Trump), then they can de-platform you as well.

We’re living in a world where the largest technology firms have more power than most totalitarian governments had in bygone eras. Since the police power of government rules over these Big Tech companies, that means governments around the world are now more powerful than they’ve ever been. The power and reach of Big Tech is global in nature, and they’ve shown their willingness to use this power to silence you.

In recent months, Big Tech has cancelled people and organizations deemed as dangerous or not sufficiently “woke.” YouTube channels have been demonetized or shut down. Twitter and Facebook accounts have been suspended. Websites have been dropped by their hosting companies, and businesses have been frozen out of using PayPal, Visa, and MasterCard. If large corporations “cancel” you and refuse to provide you with basic services, how can you operate in the modern world? You can’t. At least, not as effectively. They have the power to cancel people.

What the Bible Says

So what does the Bible say about all of this? The Bible says a time is coming when a global dictator will rule the world (Revelation 13:7). He will succeed in everything he does (Daniel 8:24). His power will be so great no one will be able to oppose him (Revelation 13:4). His control over the earth will be so complete, he’ll regulate the purchase and sale of everything (Revelation 13:17). For most of human history, this was impossible. As this is written, it’s probably still impossible. But that window of impossibility is closing fast. As technology continues to advance, every aspect of human life becomes reliant on and intertwined with digital payments and the Internet. If access to those utilities is cut off, an individual’s ability to participate in modern day society is also cut off.

This sets the stage for the Antichrist to control all buy/sell transactions on the planet (Revelation 13:17) and to determine at his whim who can or cannot participate in modern society. This is precisely the type of power Big Tech firms are consolidating today. The Surgeon General claims this is bad because “Modern technology companies have enabled misinformation to poison our information environment with little accountability to their users.” He’s wrong. What Big Tech is doing is enabling governments to limit, censor, and trample the rights and liberties of their citizens with little accountability to the ones they aim to rule. This is the road to dictatorship, and I have no doubt Big Tech will be a willing participant in the establishment of the ultimate dictatorship – the Antichrist’s global police state.

All this is yet another indication of the times in which we live. Jesus said when you see all these events take place, look up (Luke 21:28). So use what little time is left to spread the Gospel, because Jesus is coming soon!