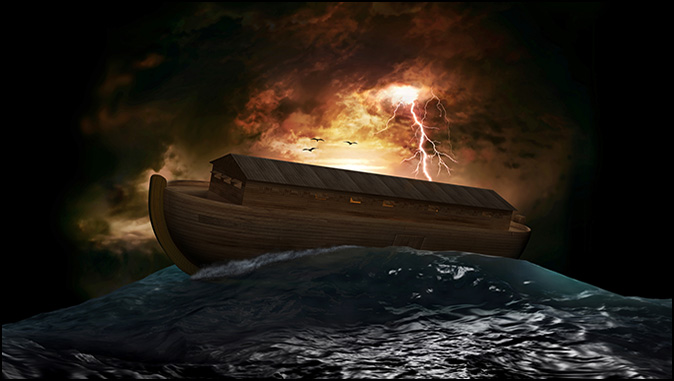 As It Was In The Days Of Noah
By Grant Phillips

In Matthew 24 Jesus explains what the world will be like just before His return to earth. Leading up to the Tribulation and His return at the end of the Tribulation, Jesus says it will be as it was in the days of Noah.

In Luke it is further explained that the days of His coming will be like it was also in the days of Lot…just like the days of Noah.

“And as it was in the days of Noah, so it will be also in the days of the Son of Man: They ate, they drank, they married wives, they were given in marriage, until the day that Noah entered the ark, and the flood came and destroyed them all. Likewise as it was also in the days of Lot: They ate, they drank, they bought, they sold, they planted, they built; but on the day that Lot went out of Sodom it rained fire and brimstone from heaven and destroyed them all. Even so will it be in the day when the Son of Man is revealed.” – (Luke 17:26-30)

I would like to first consider the days from Adam to Noah, because I think it will shed much light on what Jesus said.

The first thing that must be considered is that Adam and Eve were created as perfect human beings. This is very important.

Adam and Eve’s bodies were absolutely 100% perfect. There was not one infinitesimal malfunction of those perfectly created bodies…bodies designed and created by the hand of God. If they had not sinned, God could and would have kept those bodies in perfect working order indefinitely.

Realizing this, it is no mystery that Adam really did live 930 years, but sin shortened his life, because sin causes corruption.

I mention this because some folks just can’t believe that people in that day could live as long as they did. When we understand that they began with bodies of perfection, we can understand that as time moved on, those bodies would live fewer and fewer years because of sin that had corrupted the world.

Notice that immediately after the flood, longevity of life took a nose dive. Just think of all the dead bodies of humans and animals lying on the earth after the flood. This in itself would have a dire effect on the number of years a person would live after that event. Not only was man corrupted because of sin, but the earth was also corrupted.

Would God have created Adam and Eve and not given them perfect mental acuity? Of course not. He would never provide for them a perfect body without a mind to match. In Genesis 2:19-20 the Lord tells us that Adam actually named all livestock, birds in the sky and all the wild animals. Adam had no help from Noah Webster, no encyclopedia, and no internet. He named all the animals all by his lonesome. That had to be a monumental task.

Now think about this, we today live just long enough to get really good at something, such as a craft, the arts, sports, etc. and then we die. Beginning with Adam through Noah’s day, they had several hundred years more than we do to really excel beyond our wildest expectations.

We later learn in Genesis 4:16-24 that men were city builders, cattlemen, inventors of musical instruments and were instructors of every craft in bronze and iron. In other words, they were extremely intelligent and very gifted people. How anyone can believe the nonsense that is taught in our schools is beyond me. Those people, like us, were very intelligent, but unfortunately, like us, they turned from God and embraced worldly affairs. Their minds and hearts were far from God.

Sin was taking its toll. The bodies and minds were wearing down and sin was ramping up.

Notice that AFTER Methuselah was born, Enoch walked with God, had other children over a 300-year span and then God took him. I believe that God informed Enoch of the coming flood upon the world and promised him that it would not come as long as his son Methuselah was alive. Methuselah died in the year 2348 BC. The flood came in the same year, 2348 BC. Some even say that Methuselah even died the day of the flood. Whether or not that is true, I don’t know.

The name Methuselah means “man of the dart,” or ‘his death shall send,” or “when he is gone, then it will happen.” As God promised Enoch, as long as Methuselah was alive there would be no flood. Some say that God even tacked on an additional 120 years to Methuselah’s life in keeping His word. So instead of Methuselah dying at 849 years old, he lived 969 years.

Just as Noah was a preacher of righteousness prior to the flood (2 Peter 2:5), I believe Enoch spent 300 years of his life also warning others about the flood God was going to bring upon the earth. I realize that the flood did not occur for 669 years after God took Enoch, but 1 Peter 3:20 indicates God’s patience with those of that time. It is likely that Methuselah also spent much of his life warning others about the coming flood.

Why would God warn the people of Enoch’s day of a flood that wouldn’t occur for 669 years from the time of Enoch’s rapture? Noah would be warning them later anyway. I think it was because only eight people would be living after the flood. Everyone else would die. At least after the Tribulation, there will be many saved from the ravages of that coming judgment.

The Bible says in Genesis 6:11-12, “The earth also was corrupt before God, and the earth was filled with violence.”

We also know that there were Nephilim in that day from Genesis 6:4. Demonology was rampant and apostasy also, since the Gospel message from God to Adam was being replaced with corruption.

Another key factor is that those of Noah’s day, and also obviously Lot’s day, lived as though nothing would ever change. They ignored the warnings and continued to live in their sins without any thought of God. Their love was the world and all that was in it. Doesn’t that sound familiar?

It seems to me that the more we look at society in Noah’s day, and Lot’s day also for that matter, we are a carbon copy in both the good and the bad of their societies.

Again, I don’t know when Jesus is going to return. I do know that He chastised the Pharisees and Sadducees for not recognizing the signs of His first coming.

“Then the Pharisees and Sadducees came, and testing Him asked that He would show them a sign from heaven. He answered and said to them, “When it is evening you say, ‘It will be fair weather, for the sky is red’; “and in the morning, ‘It will be foul weather today, for the sky is red and threatening.’ Hypocrites! You know how to discern the face of the sky, but you cannot discern the signs of the times.” – (Matthew 16:1-3)

Are we missing the signs, as did the Pharisees and Sadducees, or ignoring them as so many did in the first century? Are we ignoring the warnings as they did in Noah and Lot’s day? Hopefully, we are eagerly anticipating His soon return, and it may be much sooner than we think.