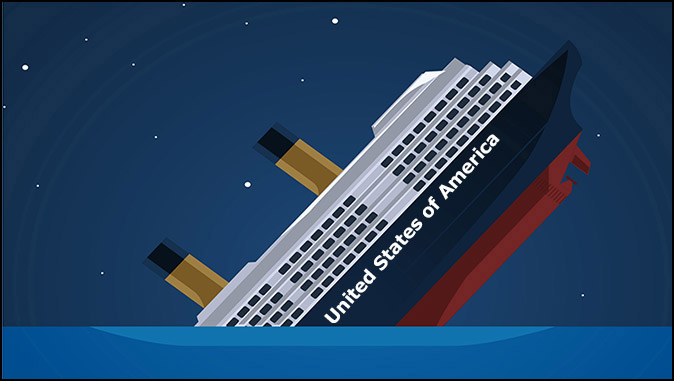 America The Endangered
By Hal Lindsey

For a long time, I have warned that the United States is not mentioned in the end-times biblical scenario. That means this nation’s power and prestige will fall into a dramatic decline at some point as it gets closer to the tribulation. Does that mean the followers of Christ should give up, hunker down in saferooms while quietly awaiting the rapture? No. There remains a great deal to pray for, hope for, and work toward.

But before we talk about hope, we need to understand the situation. This nation stands in grave danger. Time and again our leaders make bad decisions, then — surprise! — wrong decisions bring about unwanted results.

Look at the economy. Our economy staggers under the burden of government overspending. What do our leaders do about it? They spend more. It is as if they are on a ship sinking by the bow. They discover that there is a hole in the bow. The problem should be obvious. There is a hole. Therefore, repair the hole. Otherwise, the ship will sink entirely.

But this ship is run by elected officials. With the boat strongly tilted toward the bow, the electorate — the ship’s passengers — begin to complain. The tilting deck hinders their comfort. The ship’s leaders want to be reelected, so they go into action — not repairing the breach — but trying to level the slanted deck. The best way to level up the deck would be to repair the hole and bail out the water. But they prefer something easier.

By fixing the wrong problem, they double the real problem. The ship begins to sink twice as fast, albeit with a slightly more level deck. The ship’s leaders base their reelection campaigns on the fact that the deck is not as tilted as it used to be. They get reelected. Then, both the crew and passengers descend to the ocean floor on a ship with an almost level deck.

A moral freefall underlies all these problems. Breaking down even more of our moral foundation will only make matters worse. Yet, that’s what our society continues to do.

As always, we find our hope in the grace of Jesus Christ. The United States can have another Great Awakening. Millions can still turn to Jesus. I believe that would hold off America’s fall until after the rapture. Better yet, all those millions get to go to heaven! So, don’t give up on the United States. Don’t stop hoping, and don’t stop praying. Work to make things better. Have faith that as you do His will, God is always on your side.