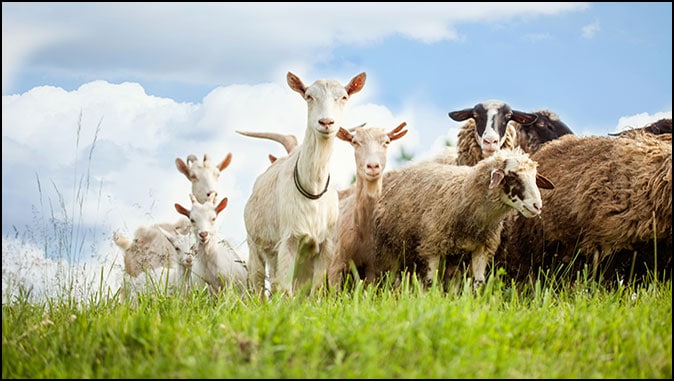 Will the United States of America be a sheep nation or a goat nation? That is perhaps a Shakespearian question in the vein of “To be or not to be?”

The question, of course, is rooted in context of the Millennium, at the beginning of which Jesus Christ will judge which will be, symbolically, a sheep nation or a goat nation — based upon how these entities dealt with God’s chosen nation, Israel. Believers in Christ who survive the horrendous Tribulation will inhabit the sheep nations. All who survive the Tribulation but who have not accepted Christ will be placed in the goat nations, then be cast into what is described as “outer darkness,” and will remain in that state until the white throne judgment at the end of the one-thousand-year reign of King Jesus upon the millennial earth.

Our quest here is to wonder just a bit on whether America is destined to be a sheep nation. You can guess without much speculation what I, personally, hope is the answer.

One thing that comes to mind in these contemporary times regarding the United States is its magnetic attraction to peoples around the world. This nation might be likened to the planet Jupiter. It is huge in most of the ways human beings see as alluring, giving it the greatest gravity — materially speaking — of any nation-state to grace earth’s surface. God has indeed blessed America “from sea to shining sea.”

While all other nations orbit this one, realization about the liberty that is synonymous with the US to worship, move about, work, play, or even just be slovenly doesn’t escape even those kept from knowing much about things going on around the rest of the planet. Indeed, America’s gravity dynamically has drawn all peoples toward its irresistible opulence. With the exception of very few, no one makes noises about leaving this nation to live elsewhere.

Billions look in America’s direction as the “shining light on the hill,” as President Ronald Reagan once called it.

Even the defectors who sought to dodge the draft during the Vietnam era have since done all they could to come back to the nation they deserted. The Hollywood types — like Barbra Streisand, for example — who periodically threaten to leave America because they don’t get their way politically, decide to stay when it comes down to the moment of leaving or staying. In southern parlance, they know on which side their bread is buttered.

Perhaps to get right to the heart of what has made America the center of the universe of nations, and to try to determine its status so far as involvement in Bible prophecy might be concerned, I would like to consider a well-known historical observation by a man outside this country — a Frenchman, no less.

French social philosopher Alexis de Tocqueville, while touring the United States in the 1800s, said about America: “America is great because America is good. If she ever ceases to be good, she will cease to be great.” De Tocqueville no doubt was speaking of how he viewed cultural and societal good. But, upon observing the nation’s Christian church foundation he encountered, he must have based his conclusion on the fact that America’s goodness in the societal sense was a result of Christianity running throughout the country’s cultural fiber. What he likely didn’t understand was what that “goodness” really means in God’s economy.

Jesus was not saying to the man who fell on his knees before the Lord that He, Jesus, was not “good,” but the Lord was acclaiming that God, alone, is the only good. Jesus was — and is — the only “good” flesh-and-blood person to ever walk the earth’s surface following the Fall of Man in the Garden of Eden. That is because Jesus IS God.

De Tocqueville now looks from the past at America’s once pretty face, and his words of warning are reverberating: “If America ever ceases to be good, she will cease to be great.”

Again, is the name “America” given anywhere in Scripture? Of course not. But the influence this nation has exerted since coming to its full bloom as earth’s greatest superpower in history makes it a prophetic nation. The Creator of all things continues to use America in His mighty hand to accomplish two very distinctive, supernatural purposes. As a matter of fact, the United States, in my view, has an overwhelming presence in Bible prophecy. Its place is at the very heart of the end-times things that we see developing — matters unfolding in daily, even hourly, news reports. In this sense, I am of the conviction that God is speaking of America — in type, if not by name, when His Word tells us the following:

“Babylon [hath been] a golden cup in the LORD’S hand, that made all the earth drunken: the nations have drunken of her wine; therefore the nations are mad” – (Jeremiah 51:7).

Certainly, the United States of America has been a “golden cup” in the Lord’s hand. No other nation of modern vintage can come close to claiming that achievement.

Some nations of Europe were formative in bringing forth Christianity into the world, thus shedding a degree of gospel light into a world of sin-darkness.

But it is America that, despite its great shortcomings and more recent degeneration, has been a shining beacon, reflecting from that golden cup in God’s hand.

Being the first nation in spreading to the whole world the gospel message — that Jesus’ sacrifice on the cross makes possible the only way to redemption for lost mankind — is a feat no other country can claim. This, ultimately, has been done not by the offices or under the auspices of American ingenuity, but by the omniscience and the omnipotence of the One holding the “golden cup.” It is God’s grace and mercy that have put America as a beacon of God’s light upon that mountain of gospel dissemination. God’s providence gave this nation the industrial and technological genius — a fact that is denied, or that is so taken for granted today.

All of the grace God has shed upon America from sea to shining sea, it must now be noted here, means nothing in addressing the question we are seeking to answer: Will America be a sheep nation or a goat nation?

The United States has been extremely generous with its wealth at every turn. Whether rebuilding war-torn nations far away, such as through the Marshall Plan, or providing billions of dollars whenever there are tragedies to be funded, our country has seemed to be the good Samaritan. But our largesse as a people also will not determine whether America is destined for sheep-nation status.

Again, according to the prophetic Word, it seems national status in this regard is to be based on how other nations have dealt with God’s chosen nation, Israel.

It is based upon this factor — US/Israeli relationship — that I have great hope in trying to answer our question.

America was chosen by God, Himself, I have absolutely no doubt, to act as national midwife in Israel’s rebirth into modernity. Any true reading of history will attest to this reality. The revisionists, the Marxists, the evil from the mind of Satan cannot change this fact. America has, despite its egregious acts of late against the God of Heaven, has been friend and protector of the fledgling Jewish state as it entered again as a nation in the mid-twentieth century.

Will America face God’s judgment? Again, there can be no doubt. We have allowed the murder of more than sixty million children in their mothers’ wombs, just as a start on listing the absolute wickedness we have seen recently. God will judge this nation.

But there will be a glorious rebirth for America, I’m believing, once its sins are purged and the Lord again counts our nation as “good.”