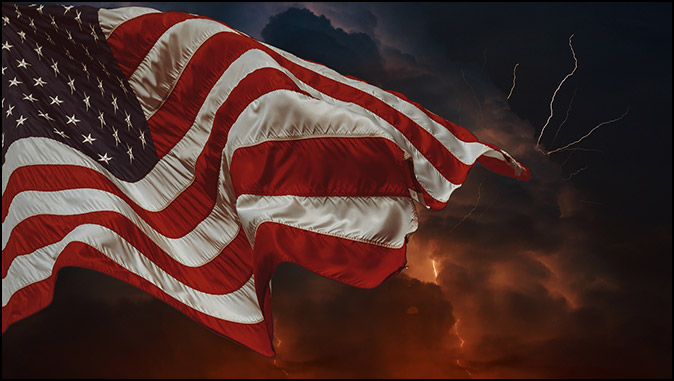 America Is Not Exempt From Judgment
By Grant Phillips

As I’ve heard David Reagan say so often, “God does not wrap Himself in the American flag.” He is simply saying along with the apostle Peter, “In truth I perceive that God shows no partiality.” (Acts 10:33)

We, as a society, think we can do or say anything we want and never have to pay the piper. Most in our society either do not believe in God, or think we are so special God would not dare judge us.

Is God really just a big teddy bear up in Heaven that winks at sin? Is He really so impressed by us, that He would consider us an exception, and just hold His nose while He gives us a big hug? I personally feel we are under judgment now, and I’ll explain why I believe that later on in this article.

First of all, I would like for us to consider a few judgments by God upon others in the past and the future. These are in no particular order.

God’s Judgment in the Garden of Eden:

Adam and Eve listened to the serpent and disobeyed God, then sin entered us and had to be judged. Judgment was handed down by God upon them and their progeny and judgment also pronounced upon the serpent. Read chapter three of Genesis.

God’s Judgment on Sodom and Gomorrah:

Sodom and Gomorrah were extremely wicked in every respect, much like us, by the way. Jesus’ half-brother said of them and the surrounding cities of that day the following:

“In a similar way, Sodom and Gomorrah and the surrounding towns gave themselves up to sexual immorality and perversion. They serve as an example of those who suffer the punishment of eternal fire.” (Jude 7)

The account of their destruction is recorded in Genesis 19:23-29. Only Lot and his daughters survived.

God’s Judgment on Those in Noah’s Day:

Well, here is another group of people, much like us, who refused to repent of their evil devises. They ignored Noah’s warnings and became more and more evil. Their judgment is recorded in Genesis 6:1-8; 7. Only Noah and his family survived. Everyone else drowned by a world-wide flood.

Because of the Pharoah’s arrogance, the people suffered and the Egyptian army was drowned in the Red Sea. See Exodus 14:36-38.

The northern kingdom, called Israel at that time, had turned their back on God and was taken captive by the Assyrians in 722 B.C. Out of 19 kings, they were all bad, from Jeroboam I to Hoshea, a period from 931 B.C. to 721 B.C. You can read about their judgment by Assyria in 2 Kings.

In the book of Daniel, we can get a first-hand look at Judah, the southern kingdom, following it’s captivity by the Babylonians from 607-586 B.C. Out of twenty kings, from 931 B.C. to 586 B.C., there were only eight that could be called “good.”

In 539 B.C. God allowed the Persians to capture Babylon to punish them for taking Judah captive. In Daniel 5 we can see the beginning of Babylon’s fall.

God’s Judgment on all Israel for Rejecting their Messiah:

In 70 A.D. Israel’s temple was destroyed and the people scattered to the four winds. Luke 19:43-44 gives us the reason of their judgment.

God’s Judgment and Reconciliation for Israel During the Tribulation:

Note Ezekiel 20:36-38; Romans 11:26; Revelation 6ff. (I will repeat this judgment at the end.) In Daniel 9:20-27 we are told of 483 years and then the additional seven years remaining which will comprise the Tribulation.

God’s Judgment of the Gentiles at His 2nd Coming:

Read Matthew 25:31-46. There will be three classes of people at this judgment: sheep (saved Gentiles), goats (unsaved Gentiles) and brothers (the people of Israel).

God’s Judgment of Fallen Angels at the End of the Millennium:

God’s Judgment of the Wicked Dead at Great White Throne After Millennium:

God’s Judgment on Gog and Magog:

Obviously, this is not an exhaustive list, but it is clear that the Almighty God we serve will not hesitate to administer judgment upon individuals and nations that refuse to repent. Someone may say, “My God is a God of love!” I must reply that God is a God of love, and He is also holy. He cannot condone sin, and there are no exceptions.

Then Peter opened his mouth and said: “In truth I perceive that God shows no partiality. But in every nation whoever fears Him and works righteousness is accepted by Him.” (Acts 10:34-35)

The United States of America was once a God-fearing country. Today every area of our society is so deep in sin we are now a carbon-copy of those in Noah’s day and those in the days of Lot. Our government is totally corrupt, steeped in pride and greed, and hates anything associated with a holy God. Along with the politicians, the entertainment industry in our nation is perverse and laughs in the face of Almighty God, as the world of business robs from the people and thumbs their nose at God. Even most of the churches have been taken over by false prophets, perversion and apostasy, and are leading people by the millions straight to hell.

What has happened to us, a country that at the very least once showed the God of Abraham, Isaac and Jacob respect, and recognized the Son of God, as the only way to the Father?

As did Ephesus, we lost our first love and turned our back on God. In our pride we have sunk to the lowest depth of Satan’s sewers. We removed God from every aspect of our society and have never looked back since at least 1963 when we chose to remove Him from our schools.

Yes, God is love and He proved it at the cross, but He doesn’t save anyone by His love. He saves all who will come to Him by His grace. (Ephesians 2:8-9)

God’s Judgment at the Cross of Calvary:

The greatest judgment of God was upon Jesus Christ at Golgotha (Calvary). On that cross Jesus took our sins upon Himself and died for us that all who come to Him will be saved from wrath. Please read John 12:30-33.

Self-Judgment During the Church Age:

Every person who comes to Jesus and asks Him to save them will be saved and never face judgment, because Jesus paid the price for us that we could never pay.

1 Corinthians 11:27-32 tells us, as true followers of Christ, to judge ourselves so as not to bring any disrespect upon our Lord. Also, we learn of Him and serve Him in whatever way He leads us. In turn, there is another judgment.

God’s Judgment of the Believers Works After the Rapture:

2 Corinthians 5:10 and 1 Corinthians 3:12-15 promise that Jesus will judge the works of every believer, not sins, but works. He paid our sin debt at the cross, but this judgment is to reward us for serving Him.

Even though our country has placed itself in God’s cross hairs, as did the Pharoah of Egypt and so many others, we must stay true to God’s Word.

There is another judgment that many will face.

God’s Judgment During the Tribulation (Repeated):

The Church will not be here for the Tribulation (1 Thessalonians 1:10; 5:9). We will be in Heaven with Jesus preparing for the greatest wedding of all. All who have rejected Jesus will remain upon earth to suffer through God’s wrath (Revelation 6:17), a time so terrible that all mankind would die if not for His grace (Mark 13:20).

In my opinion, our once great country has crossed the line and there is nothing remaining but the judgment of God. We are in the last days just prior to the Tribulation, and the only thing the Bible says about this time period is that it will get worse and worse until the Church is first removed and then the Tribulation will begin.

Our leaders and the majority of our populace want nothing to do with God, but the good news is that any who is willing can come to Jesus right now and be saved from the wrath to come. How do you avoid the Tribulation? Call upon Jesus now.

Out of the list of judgments I have mentioned above, how can we be so naïve in thinking we are exempt simply because we are the United States of America? We are not exempt. Do we not realize that God has waited two thousand years in order to give the world plenty of time to repent?

“The night is far spent, the day is at hand: let us therefore cast off the works of darkness, and let us put on the armour of light.” (Romans 13:12)