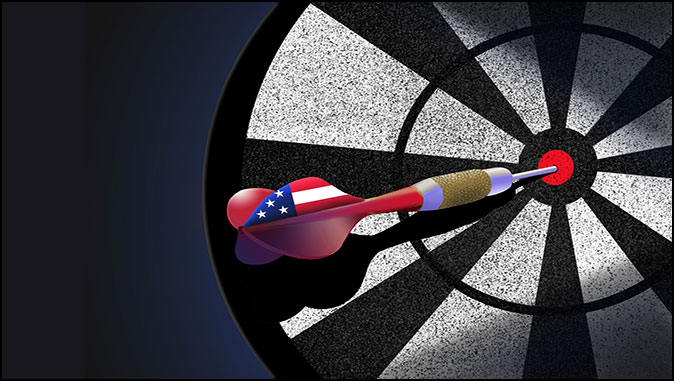 America in the Crosshairs
By Jonathan C. Bretner

If I did not believe in the Rapture and the following seven-year tribulation, that would not deter me from anticipating God’s judgment on America at some point in the near future. Because Scripture teaches Jesus’ imminent appearing followed by the wrath of the day of the Lord, I am all the more certain that the U.S. now rests in God’s crosshairs.

After reviewing a chapter in her husband’s book on the evil in America at the time, Ruth Graham replied, “Billy, if God doesn’t come soon and bring judgment upon the United States, He’s going to have to apologize to Sodom and Gomorrah!” Wickedness in the U.S. has grown exponentially in the decades since then.

The words Job spoke long ago still ring true today and certainly apply to God’s sovereignty over all nations:

With these things in mind, let’s let a couple Old Testament passages regarding ancient Judah that we can apply to the U.S. and other nations across the globe as well.

Has the Lord already begun to take action against the U.S.? Yes, I believe He has.

One passage that speaks to me in this regard is Isaiah 3:4-5, a passage of warning to ancient Judah and Jerusalem:

“And I will make boys their princes, / and infants shall rule over them. / And the people will oppress one another, / everyone his fellow / and every one his neighbor; / the youth will be insolent to the elder, / and the despised to the honorable.”

Let’s examine how these verses might apply to the United States.

The Hebrew word for “boys” in Isaiah 3:4 suggests a young lad or perhaps a servant. In this context, it denotes an immaturity of leadership that the Lord said would characterize those in charge of Judah ahead of His judgment falling on the nation.

One could translate “infants” in verse 4 as “malicious young men,” or even tyrants. This signifies the inexperience of a child or babe who rules by selfish inclinations or perhaps the whim of the moment. Its usage includes the evil motives of those in positions of authority.

These words aptly characterize those in charge of the United States at the present moment. President Biden’s dementia makes him appear childish as he stumbles through sentences that make no sense whatsoever, expresses fear of disappointing those who control him, and behaves in a bizarre manner (or talks about it). Other nations recognize his diminished mental capacity. Vice President Harris lacks any semblance of maturity; it would be an unmitigated disaster should she become president.

The executive orders that have come from the White House since Biden took office reflect an evil and totally unbiblical world view. In many ways they reflect the “malicious” intent that the Lord said would characterize the immature leaders of Judah as His judgment drew near.

The picture in Isaiah 3:5 is that of a land where people fight against and oppress each other with the youth acting with brazen disrespect toward the older generation. It goes without saying that this describes America today. Just as with ancient Judah, I see this as an indication that the Lord’s judgment has begun.

Jesus said, “Every kingdom divided against itself is laid waste, and no city or house divided against itself will stand” (Matthew 12:25). Does not this principle apply to such a splintered nation as we see in the United States? So many of those in high elected offices seem intent on using division as a means of destroying America.

The “perilous times” that the apostle Paul describes in 1 Timothy 3:1-5 denote selfish arrogant people living for themselves with no regard for others. The results of these traits automatically lead to much strife and disharmony, which sadly characterizes life both inside and outside the church today.

Wicked Behavior that God will Not Allow to Continue

In addition to the indicators that the Lord’s judgment on the United States has already begun, we also see evil behavior about which the Bible warns God will absolutely not allow to continue.

Habakkuk is a book that speaks to us today. The prophet’s complaint in Habakkuk 1:2-4 provides us with a list of items for which God will at some point take action to stop.

O Lord, how long shall I cry for help, / and you will not hear? / Or cry to you “Violence!” / and you will not save? / Why do you make me see iniquity, / and why do you idly look at wrong? / Destruction and violence are before me; / strife and contention arise. / So the law is paralyzed, / and justice never goes forth. / For the wicked surround the righteous; / so justice goes forth perverted.

Let’s examine how these things fit with today’s world.

In America, we now have the most pro-abortion administration in our history. The horrors of the senseless murder of our most vulnerable grieve my heart. Will not the Lord hold our nation accountable as we continue to elect Congressman and Senators who not only actively promote abortion, but also refuse to outlaw infanticide for babies who survive the horrors of abortion? He absolutely will.

The carnage in America extends far beyond the river of blood that flows from our abortion death mills. The violence propagated against children via sex trafficking is mind boggling, it’s horrific! The Lord will surely judge all those involved in this abomination.

The CDC reported that as of July 9, 10,991 deaths have occurred as the result of COVID-19 injections. The VAERS data also confirms that 9,274 people have incurred permanent disabilities as a direct result of the jab with 59,347 men and women spending at least one night in the hospital because of the jab.

The government seeks to justify these outrageous numbers on the basis that they represent a low percentage. Such flawed reasoning overlooks the human toll on so many that has caused great suffering.

Habakkuk reemphasized the “destruction and violence” that confronted him in ancient Judah.

In America, I see far more violence than that of the murder of the unborn or that propagated against our children in sex trafficking. The destruction and bloodshed in our major cities increase by the day. A few weeks ago in Chicago, thugs pulled a Hispanic couple from a car and shot them. Law and order have all but vanished from our major cities. Murder rates in large cities in the U.S. have skyrocketed due to efforts to defund our police propagated by the Democratic party.

The prophet Habakkuk also complained that the Lord caused him to see much wickedness with apparently no action to end it (v. 3). Why did He seemingly look the other way?

As for America in the twenty-first century, this almost needs no comment. I never thought I would see so much evil behavior and lawlessness before the rapture. The influence of the LBGTQ agenda on our children is beyond despicable. It begs this question: Why do we as a nation continue to elect men and women who wholly support the wicked agenda of the LBGTQ and openly promote transgenderism among seven-year-old children?

Behavior that would have outraged the majority of Americans sixty years ago has now become commonplace and accepted by many as normal. We see the words of Romans 1:18-32 springing to life. As God gives the wicked over to increased forms of depravity, many have reached the end that Paul talks about in verse 32, “Though they know God’s righteous decree that those who practice such things deserve to die, they not only do them but give approval to those who practice them.”

The words of Habakkuk 1:4 perfectly portray life in the U.S., “So the law is paralyzed, / and justice never goes forth. / For the wicked surround the righteous; / so justice goes forth perverted.”

Although these words speak to conditions in ancient Judah, it’s as if the prophet was depicting life in the twenty-first century.

Due to the fact that thefts under $950 are no longer prosecuted in San Francisco, California, looting has become commonplace. Stores in the city no longer report stealing to the police and store clerks do not dare risk their lives to stop it. Many retailers are going out of business or closing shop as of the widespread stealing. Target recently reported that they are closing all stores in the area at 6 p.m. as a result.

In America, many of the guilty are set free or never charged for their crimes. On the other hand, people lose their jobs or face lawsuits for defending what the Bible says about marriage and sexuality. The rich and powerful never face the consequences for their criminal behavior for which less influential people spend years in jail for crimes that the elite commit with not repercussions.

The Seven-Year Tribulation is At Our Doorstep

The Lord’s response to what He sees in the U.S. would most likely be quite similar to what he told Habakkuk. Then, God assured His prophet that He indeed saw the wickedness and bloodshed and that judgment was already on the way in the form of the Chaldeans (the Babylonians) who would later destroy Jerusalem and the temple. This occurred a decade or two later, perhaps while the prophet was still alive.

Skipping ahead to the twenty-first century, the Lord indeed sees the bloodshed, deception, oppression, and vileness rampant in the U.S. And I believe He will intervene much sooner than most imagine; His answer is already on the way. He will not let wickedness of our day continue unchecked.

Scripture assures us that God will someday pour out His wrath on sinful humanity in what it refers to as the day of the Lord. The book of Revelation adds more detail to this time in what we refer to as the tribulation, a seven-year time of horror upon the earth.

The New Testament assures believers, however, that the Lord will take us home to heaven before the start of this time of wrath upon the earth. In 1 Thessalonians 1:10 and 5:9-10, the apostle Paul confirms that Jesus will come for His Church before the onset of the terrible day of the Lord (see Isaiah 13:9-13; 24:3-20), which includes all of the tribulation period.

How much longer will the Lord’s patience endure in view of the senseless bloodshed and exceeding wickedness that grows worse by the day? How much more distress will we see before our departure from this world?

I do not know the answer to these questions.

I am certain, however, that judgment is coming. Evil people will enjoy success for a while longer, but God will have the final word (Psalm 37:7-15).

It would be very wrong to set a date for the Rapture, but one would be equally mistaken to assume that it will not happen in the very near future.

Are We Approaching The End Times?

Are We Approaching The End Times? By Grant Phillips From 1956 to 2010 a popular…

Enabling the Mark of the Beast

Stepping Closer to Gog and Magog