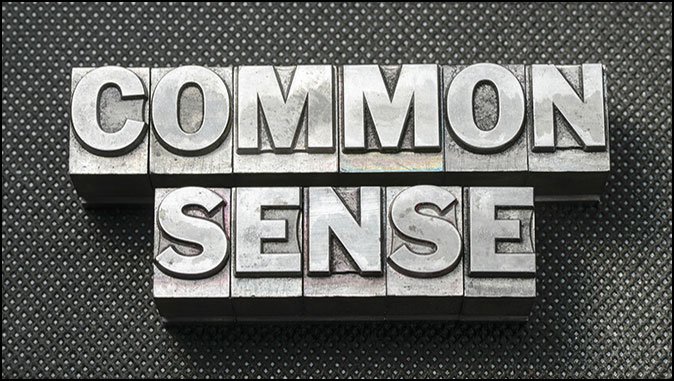 Common sense…straight thinking…seeing the obvious. The whole world seems to find these things more and more difficult. And the Bible tells us why. 2 Timothy 3:8 speaks of men who “oppose the truth, men of depraved mind.”

It makes sense. The more people oppose truth, the more difficult it becomes to think straight.

Romans 1:18-32 takes that same concept and elaborates it on a large scale. It speaks of peoples and nations turning against God. Romans 1:18 says they “suppress the truth in unrighteous.” Verse 21 speaks of people refusing to honor God, then becoming “futile in their speculations.” Romans 1:22 says, “Professing to be wise, they became fools.”

The 24th verse says that because of decisions to reject God in favor of evil, “God gave them over in the lusts of their hearts to impurity.” Verse 25 says, “They exchanged the truth of God for a lie.” The verses that follow give specific details of the kinds of sin such deteriorating civilizations fall into.

The sad story crescendos in Romans 1:28. “Just as they did not see fit to acknowledge God any longer, God gave them over to a depraved mind.”

The mind loses worth because it no longer does its job. People stop being able to think in their own best interests. Consider massive capitalist firms trying to appease socialists by adopting socialist rhetoric and values. Somehow it never occurs to them that the monster they’re now helping to nourish and grow, will one day see them as lunch.

Another example would be when the freest, fairest, most prosperous nation in the history of the world decides to rip itself into pieces because it was never perfect. The examples could go on all day. Read any news site on any day. You’ll see examples everywhere of individuals, companies, nations, and groups of nations acting against their own self-interests.

When nations and people purge their minds of God, they begin to think self-destructively.

For those who hold fast to God and His word, it can all be dismaying. How do we respond? Do we become outraged or fearful? No. When Jesus said to preach the Gospel everywhere and to everyone, He included these very people. Christ died for them. He loved them that much, so we should love them, too.

1 John 4:18 explains the amazing result of such love. “Perfect love casts out fear.” 2 Timothy 1:7 puts it like this. “God has not given us a spirit of fear, but of power and of love and of a sound mind.”

Into The Harvest By Hal Lindsey World systems are stretched to the breaking point. These…

God’s Laughter Will Turn to Anger

The Breakdown of Supply Chains

The Breakdown of Supply Chains By Todd Strandberg All over the world, multiple supply chains…