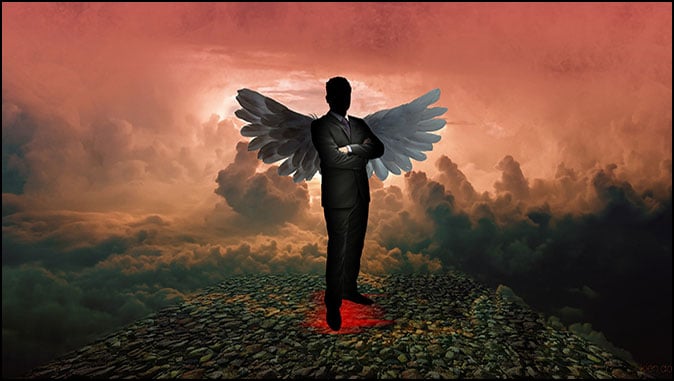 A Picture Of The Antichrist
By Grant Phillips

The Antichrist hasn’t arrived on the world scene yet, but when he does, even before he opens his conniving mouth he is already defeated. He just doesn’t know it. There is a pictorial insert in Isaiah 22 of one prophecy, among others, that shows his prideful nature and his shameful demise.

Isaiah 22 is a prophecy concerning Jerusalem, and verses 12-14 are as follows: (I am using the New Living Translation NLT in this article for clarity.)

“At that time the Lord, the LORD of Heaven’s Armies, called you to weep and mourn. He told you to shave your heads in sorrow for your sins and to wear clothes of burlap to show your remorse. (12)

But instead, you dance and play; you slaughter cattle and kill sheep. You feast on meat and drink wine. You say, “Let’s feast and drink, for tomorrow we die!” (13)

The preceding verses of this chapter should be read also, but the point is God is telling Jerusalem (Judah, the southern kingdom) that they have not repented. Not only have they not repented of their sins, but they have embraced their sins and are ignoring the warnings God has given them. They have become worse and worse in their rebellion against Him, and have arrived at the point where God’s patience has run out. They will go into captivity.

When reading verses 1-14 don’t they sound very much like us today? Don’t we also have the attitude of, “Let’s feast and drink, for tomorrow we die?” Just how long do we think we are going to get by with our sins against Almighty God? There is a payday coming and it is called the Tribulation.

When that time comes I won’t be here. Neither will anyone else be here who has put their trust in the Lord Jesus Christ. We will have been ‘snatched away’ by Jesus prior to the Tribulation during an event commonly called the Rapture. We will be in Heaven with the Lord. You can be there also by simply putting your trust in Jesus Christ, believing in His death, burial and resurrection for all who will come to Him by faith.

The bad news is that the Tribulation will be a literal hell on earth. It will be the direct judgment of God upon a fallen world that rejected His Son Jesus. The good news is Satan has already lost the battle. His minions, the Antichrist and the False Prophet have already lost. These three and all of Satan’s followers will be cast into hell.

“This is what the Lord, the LORD of Heaven’s Armies, said to me: “Confront Shebna, the palace administrator, and give him this message: (15)

Shebna was secretary of the treasury or prime minister under King Hezekiah of the southern kingdom. Because of his position, he was the second most powerful person in Judah. Only the king had more power than Shebna.

For whatever reason, Shebna was full of pride and delighted in his power of being the palace administer. He was so full of himself he decided to build a tomb for himself that would be fit for a king. Little did he know he would never get to use it. Instead he would be buried in a distant foreign land, far away from the cozy comforts of home.

Obviously Shebna was a wretched man, a real snake in the grass who stepped on anyone to fulfill his lusts. He should have been attending to the spiritual affairs of Judah. In all likelihood, he was probably also a thief and a liar. He wasn’t concerned about Judah’s spiritual welfare. No, no. His only interest was to feed his own greed. He was self-centered and self-righteous. My guess is he would make Ebenezer Scrooge look like a Sunday school teacher. He is a perfect picture of the coming Antichrist, and God has something to say to him…and to us.

“Who do you think you are, and what are you doing here, building a beautiful tomb for yourself—a monument high up in the rock? (16) For the LORD is about to hurl you away, mighty man. (17) He is going to grab you, crumple you into a ball, and toss you away into a distant, barren land. There you will die, and your glorious chariots will be broken and useless. You are a disgrace to your master! (18)

It doesn’t take much effort to picture some folks today who remind us of ole Shebna. We in this country have quite a few politicians (and others) who could fit the bill, but as sorry as they are there is one coming who really takes the cake…the Antichrist.

Anyway, some people in power have allowed it to go to their head and think they can do anything they please and no one can do anything about it. For sure, the Antichrist will be of that mindset, but there is One who can do something about this nasty character.

As powerful as the Antichrist will be, since he will be indwelt by Satan, he is no match for God. Every now and then I’ll print something, then crumble it up into a ball and throw it into the trash can. That is exactly what will happen to the Antichrist at the end of the Tribulation. He and his buddy, the False Prophet will be cast into the lake of fire by the Lord Jesus. (Revelation 19:20; 20:10)

“Yes, I will drive you out of office,” says the LORD. “I will pull you down from your high position. (19) And then I will call my servant Eliakim son of Hilkiah to replace you. (20)

Yes, the Antichrist will build himself a kingly monument for all the world to see, but he’ll never get to use it, because he will removed from his high position and cast into hell. (Revelation 19:20; 20:10)

God removes Shebna and replaces him with Eliakim, a righteous man. Currently, this world belongs to Satan, and Satan will rule this world through the Antichrist during the Tribulation. However, Satan’s time is running out … rapidly. Jesus will take back the reigns, defeat Satan and his buddies and rule this world as it should be in the next event we call the Millennium.

I will dress him in your royal robes and will give him your title and your authority. And he will be a father to the people of Jerusalem and Judah. (21)

Jesus quotes most of this verse in Revelation 3:7. As powerful as some humans may become, no power can match that of God. Satan is very, very powerful, and we should never take him lightly, but even he is no match for the Son of God. His time is coming to an end, and it could never be soon enough for me.

He will bring honor to his family name, for I will drive him firmly in place like a nail in the wall. (23)

They will give him great responsibility, and he will bring honor to even the lowliest members of his family.” (24)

Only Jesus is able to restore honor to this world, and that day is soon coming. It may be sooner that we realize.

But the LORD of Heaven’s Armies also says: “The time will come when I will pull out the nail that seemed so firm. It will come out and fall to the ground. Everything it supports will fall with it. I, the LORD, have spoken!” (25) (Isaiah 22:15-25)

God uses the example of driving a nail into a wall…for example to hang your coat on. We can hang all of our hope, wishes, dreams, and desires upon Jesus Christ and that nail will remain. He is the solid rock. He will never let us down. The nail representing Him will stay forever, but in this last verse, verse 25, He is referring again to the Antichrist.

Some of us have all our hope in Jesus, the nail that will not fall, but most people have their hope upon themselves or other people, and they will let us down. During the Tribulation the masses will hang their coats upon the Antichrist, and all their hopes will be dashed. However, there will be some during the Tribulation who will hang their coats upon Jesus and be saved. Unfortunately, many of those who defy the Antichrist will be beheaded. They will lose their lives, but they will go to Heaven.

In this last verse, verse 25, when God says, “The time will come,” or “In that day,” (KJV) He is referring to the Tribulation period. God will pull out the nail that represents the Antichrist, meaning simply, the Antichrist will be defeated and thrown away into the belly of the lake of fire. Satan will join him and the False Prophet one thousand years later. (Revelation 19:20:20:10)

Most people today think all of this as a laughing matter. They ridicule it and shrug it off, but it is all too real. Most do not believe a word that is written in this chapter of Isaiah (or anywhere else in the Bible). Most will not discover the reality until it is too late.

“When the Son of Man returns, it will be like it was in Noah’s day. (37) In those days before the flood, the people were enjoying banquets and parties and weddings right up to the time Noah entered his boat. (38) People didn’t realize what was going to happen until the flood came and swept them all away. That is the way it will be when the Son of Man comes.” (39) (Matthew 24:37-39)

Ready for the Rapture

Christian Security in the Face of Viral Fear

Christian Security in the Face of Viral Fear By Col. Tim Moore A Long-Dreaded Threat…

The Coronavirus and Bible Prophecy

The Coronavirus and Bible Prophecy By Britt Gillette Sometime in late 2019, a mysterious virus…

Lawlessness Is Setting the Stage for the Antichrist