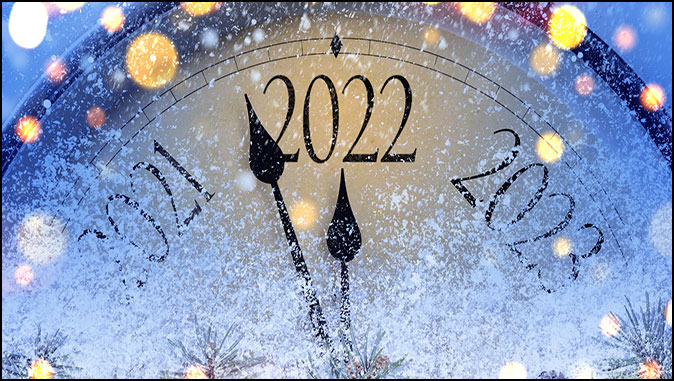 2022: A Prophetic Preview
By Hal Lindsey

The study of Bible prophecy does not make you clairvoyant or a soothsayer. Don’t ask me for stock tips. But I have to admit to one rather astounding truth. I have a supernatural source for understanding the future. So do you. It’s called the Bible.

The Bible does not say if a new pestilence (or plague) will break out in the year 2022. But it does say that as the time of the Lord’s return approaches, pestilences (plural) will increase.

It also speaks of increases in rumors of war and of war itself. In recent months, we’ve seen such rumors like never before. A nation with thousands of nuclear warheads — Russia — now threatens the small nation of Ukraine. That, in turn, threatens the peace of Europe, and perhaps the world.

The nation with the world’s fastest growing military — China — threatens Taiwan and India. That threatens the peace of Asia… and the world. Iran either already has nuclear weapons or soon will, and the religion of its leaders makes them eager for a global conflagration. The press is now reporting what many of us have long suspected — that in response to Iran, Saudi Arabia has been working with China to acquire nukes and the missiles to carry them. And don’t forget that North Korea is again making threatening moves.

Each of these rumors of war fits the specific program of wars laid out in the Bible for the end time.

Jesus told us that the time preceding His return would be a time of lawlessness. Right now, that trend is red hot over most of the world, and it seems certain to get worse in 2022. An especially disturbing aspect of the current climate of lawlessness is how high it reaches. Corrupt governments litter the earth. Across the world, national leaders and prosecutors tend to enforce the law against political opponents, but not against political supporters.

In recent years, global elites have used disasters and the threat of disasters to create a pace of worldwide change never seen before. This change includes a redefining of moral values and even of the definition of truth. Over the past two years, they have primarily used Covid-19. In 2022, they will continue to use fear as the primary driver of change. But as the year goes on, expect them to increasingly shift the focus of our fears more toward climate change.

Disasters (natural and manmade) are a mark of the end time, and we should not be surprised when they increase. The Bible specifically speaks of hyper-inflation and the threat of global economic collapse as we get closer to the Lord’s return. It also speaks of an increase in racial tensions and globalism. The truth is, we see prophecy being fulfilled, or getting ready to be fulfilled, everywhere we look.

That should spur us on to increased efforts in evangelism. We must resolve to make 2022 a year for getting God’s word out to the whole world. And while we faithfully give to missionary causes around the globe, let us also remember our families, neighbors, friends, and local communities. They need the gospel, too.

The tenor of the times should provoke us deeper into the Bible and into prayer. We don’t have time for complacency. Draw close to Him. Follow Him relentlessly. Follow Him in every part of your life.

And be at peace. Thousands of years ago, God told prophets details about the day we live in. Let that give you comfort. He is still in control. Rest in Him and in the infallibility of His promises.