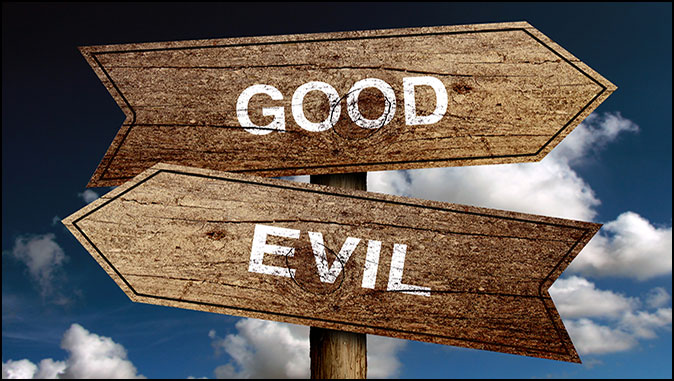 War Of The Worlds
By Dennis Huebshman

H. G. Wells wrote a novel called “War Of The Worlds”, and it was originally published in 1898. It was about an invasion from Mars, and was quite an advanced story line as the Wright Brothers flight wasn’t made until 1903 in Kitty Hawk, North Carolina. Since the novel was published, there have been numerous books, movies and television shows using Wells’ concept. (any emphasis mine)

There is an actual and for-real war that has been taking place since before the earth’s creation. It isn’t between earth and Mars, Pluto, Mickey Mouse or whatever. It’s a battle between good and evil.

On the evil side, it is led by a fallen Arch Angel called Lucifer, satan and the devil, just to name a few of his titles. He is a created being made by God, and was possibly the most beautiful of all the angels.

Apparently, God allows His angels a certain latitude, just as He does for humans, when it comes to decision making. Our Heavenly Father is all about love, and rather than be a strict dictator, He allows us free choice to accept Him, or reject Him. If anyone chooses to reject Him, God will honor their decision, but has been very forthcoming as to what the consequences of doing so will be.

Apparently, satan was the first to rebel due to destructive self-pride. Ezekiel 38:17 states; “Your heart was proud because of your beauty; you corrupted your wisdom for the sake of your splendor. I cast you to the ground and exposed you before kings to feast their eyes on you.” Revelation 12:4a states; “His tail swept down a third of the stars of heaven, and cast them to the earth.” It’s believed this refers to satan’s rebellion, and his influence drew about one-third of the heavenly host to fall with him. Just a quick note; they do not have a pathway to forgiveness. Once fallen, they’re lost forever.

There are numerous verses about the angels who rebelled being put in chains such as Jude 1:6; “And the angels who did not stay within their own position of authority (the position God had assigned to them), but left their proper dwelling, He has kept in eternal chains under gloomy darkness until the judgment of the great day.” That would be the final White Throne Judgment of Revelation 20:11-15. Satan receives his sentence just before that in Revelation 20:10.

Another verse about angels who have sinned is 2 Peter 2:4; “For if God did not spare angels when they sinned, but cast them into hell and condemned them to chains of gloomy darkness to be kept until the judgment…” They are not in the lake of fire yet, but a holding place where they have started to receive their punishment.

We don’t know the actual reasoning behind God’s overall plan, but He is allowing satan and some of the fallen angels (demons) to fulfill Bible prophecy about end times. There is a constant battle that is taking place between good and evil, and 1 Peter 5:8 warns us; “Be sober-minded; be watchful. Your adversary, the devil, prowls around like a roaring lion, seeking someone to devour.”

Jesus told about what will happen as a final judgment in Matthew 25:41; “Then He will say to those on His left (unbelievers and unfaithful to God), ‘Depart from Me you cursed, into the eternal (lake of) fire prepared for the devil and his angels’.” Some people make jokes about going to hell and partying with all their worldly friends. There is absolutely no room for humor about this. Each being there will be in their own personal agony forever, and it will be completely without light. A person could possibly be right next to someone they know, but they won’t socialize, period.

As for humans, our entry into the war started in the Garden of Eden. Once we fell into sin, everyone, except Jesus, has carried the sin-nature within us. It became obvious to the Father that even though there were humans who really wanted to follow His will before Calvary, and to accept Jesus from Calvary forward, we could never offer the sacrifice He would require for forgiveness of our sins.

Of course, there are those who prefer what this earth has to offer, and some even openly worship satan. This does not surprise our Heavenly Father as there has been this issue from the beginning. Jesus stated that there would be “few” that would be on the straight and narrow road to life (Heaven) in Matthew 7:13-14. One of the biggest recent changes is the satanic activity that is in the open as never before. It has always been there, but mostly kept out of the public’s eye.

Paul tells us in 2 Thessalonians 2:9-12; “The coming of the lawless one (final antichrist) is by activity of satan with all power and false signs and wonders; (10) and with all wicked deception for those who are perishing, because they refused to love the truth, and so be saved. (11) Therefore, God sends them a strong delusion, so that they may believe what is false; (12) in order that all may be condemned who did not believe the truth, but had pleasure in unrighteousness.”

For true believers, it’s hard to understand how anyone could not believe in Jesus; but to many, the lure of this earth is a powerful tool used by satan. In 1 Corinthians 1:18, we read; “For the word of the cross is folly to those who are perishing; but to us who are being saved, it is the power of God.”

More and more we are seeing Christians being condemned by the world as being “haters”. Just because we believe the Bible about what is and isn’t sin, we are a perceived threat to them. We are to love all our brothers and sisters for their souls, but we don’t have to participate in, or accept their abominable ways as they would like us to. Our God does not force Himself on anyone, as do the so-called gods of other “religions”, “cults” or whatever.

Our Jesus voluntarily and willingly came to earth as a human to do something no other human could accomplish. He became the perfect “sin-offering” that would be acceptable to the Father. It’s only fitting that anyone who would not accept His wonderful gift, will not be with Him in everlasting eternity.

There are only two eternal pathways; Heaven with Jesus and with all the righteous from creation to the end of the millennium; or hell with satan and all the fallen souls and demons. It doesn’t matter if someone doesn’t believe that Jesus exists, or that there’s no real hell or that forever doesn’t mean exactly that, God’s word is absolute and true. The minute we take our last breath on this earth, our final destiny is set. We can insure our Heavenly Home by calling out to Jesus to be our Savior. I’ve listed them many times, but please read Acts 2:21; Romans 10: 9-13; then go to John 14:6; Acts 4:12; Romans 5:8; Romans 8:1 and Ephesians 2:8-9. Take these passages as the true word of the Father, and they mean just what they say.

Jesus will be coming soon to call all His flock (true believers) up to meet Him in the air. Those left behind will face times that will make today’s evil seem like a Sunday picnic. He’s waiting for your call, but after the Rapture, life will be very miserable on earth.

True believers doesn’t mean any “organized” religious group, but every individual that has truly called on Jesus to be their Savior. Everyone applies to every living soul on this earth, no matter where they are, or what their background is. All sins can be forgiven except not receiving and accepting Jesus before their last breath on this planet.

Today would not be too early to call on Him. He could be here by tomorrow as we don’t know the exact day or hour of when His call will be. Your reservation for an eternal home with Him will be made the instant you have Him in your Heart.