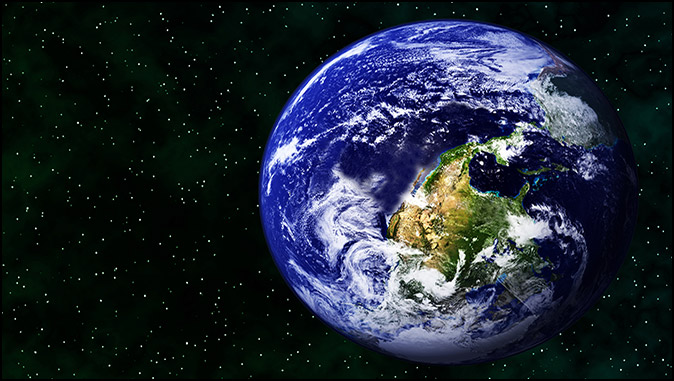 Upside Down Inside Out and Backwards
By Dennis Huebshman

Having been born two years before the “Blooming of the Fig Tree” on May 14, 1948, I am part of the generation that is supposed to see the end of this age. Naturally, everyone from that time on is in the same era. Our Savior covered all the end-time events in Matthew 24, Mark 13 and Luke 21. These passages are not in chronological order, but they give us a scenario of what will take place just before He physically returns to rule the earth for 1000 years at the end of the 7-year tribulation. Luke 21:28 sums it all up with; “Now when these things begin to take place, straighten up and raise your heads, because your Redeemer is drawing near.” (ESV – all emphasis mine)

Every event given by the Savior has happened at one time or another in past history, but not to the degree that exists today; and not all the signs at once. It could be said that the time, “when these things begin to take place”, started within just the last decade. Paul’s description of last days attitudes and actions in 2 Timothy 3, and Peter’s words about “scoffers” in 2 Peter 3, are no longer the exception, but are rapidly turning into the “new normal”. Matthew 24:12 states, “And because lawlessness will be increased, the love of many will grow cold.”

In 1 John 2:18, the apostle states; “Children, it is the last hour, and as you have heard that antichrist is coming, so now many antichrists have come. Therefore, we know that it is the last hour.” There were antichrists and false prophets from the time of Calvary to now, but their openness has really come to light in just the past few years.

Looking at 2 Timothy 4:3; “For the time is coming when people will not endure sound teaching, but having tickling ears, they will accumulate teachers to suit their own passions.”

Evangelical churches are not the same as when I was growing up, as more and more are turning away from pure Biblical teaching. They are going to the “ear-tickling” messages and “heart-thumping” music, with the word of God being “tweaked” to fit the present day attitudes. People don’t want to hear that they are “sinners” in need of a Savior. They want to hear that, “there’s many ways to Heaven without Jesus”, and any lifestyle they choose is absolutely fine. After all, they believe that the “abominations” given in the Bible are antique and out of date. Many people do not believe they apply today.

Reports from prophecy experts (I consider myself a novice) are pointing out that we are nearing the “Midnight Hour”. That’s a designation that has been in place for a while, which indicates that when the world clock reaches midnight, this era will end, and the next phase will begin.

Satan and his followers are in full antichristian mode, and anything that was perfectly acceptable previously is now being called “hateful”. The Isaiah 5:20 verse totally applies today; “Woe to those who call evil good and good evil; who put darkness for light and light for darkness; who put bitter for sweet and sweet for bitter.”

Our so-called government leadership is more than just leaning toward all the alphabet and gender based groups, and are openly rejecting anything Biblical. A significant number of our American senators and representatives don’t even try to hide their negative attitudes for God’s chosen people, and anything that glorifies Jesus.

A verse that is relevant is Zechariah 12:2-3: “Behold, I am about to make Jerusalem a cup of staggering to all the surrounding peoples. The siege of Jerusalem will also be against Judah. (3) On that day, I will make Jerusalem a heavy stone for all the peoples. All who lift it will surely hurt themselves. And all the nations of the earth will gather against it.” Israel is a sovereign nation, yet outside nations are saying they are “trespassing”. It would be like Iceland saying that Maine belongs to them, and we should surrender it to them.

One issue the whole world is ignoring, is that when our Father makes a covenant, He does not change it. Going to Genesis 12:2-3; “And I will make you (Abraham) a great nation, and I will bless you and make your name great, so that you will be a blessing. (3) I will bless those who bless you, and him who dishonors you, I will curse; and in you, all the families of the earth shall be blessed.” This covenant is as true today as the instant that the Father promised it to Abraham.

There are those who say that Israel has lost out because of what the people have evolved to through the centuries. Some say that only the “church” is now God’s chosen. First, Romans 11:25; “Lest you be wise in your own sight, I do not want you to be unaware of this mystery, brothers; a partial hardening has come upon Israel, until the fullness of the gentiles has come in.” The Father has not abandoned Israel, and is actually getting ready to give His full attention to them. They are about to go into a time of discipline that when it is over, all will believe in Jesus as their Messiah.

John 10:14-16; “I am the Good Shepherd. I know My own, and My own know Me, (15) just as the Father knows Me and I know the Father; and I lay down My life for the sheep. (16) And I have other sheep (all non-Jews) that are not of this fold (Jews). I must bring them also, and they will listen to My voice. So, there will be one flock, one Shepherd.” That means everyone in the whole word that will receive and accept our Savior.

When Jesus shed His pure sinless blood at Calvary, from that moment on, all who would believe in Him and call on Him to forgive them and be their Savior forever will be saved. (Romans 10:13) This does not refer only to Jews or only Gentiles, but every single person that has lived, or will live to the end of the Millennium who will receive and accept Jesus as their Savior. It has nothing to do with race, creed, nationality or whatever. Every living breathing person has the privilege of choosing for themselves to be a part of His precious flock. It’s an individual choice, and no one will be forced to make it.

Also, no one has sinned so greatly that the blood of Jesus can’t make them whole, forgiven and saved forever. All who truly repent and ask Jesus to forgive and save them will be saved.

For the down-side, all who were out of the Father’s will prior to Calvary, and all who will have rejected Jesus from Calvary to the end of this earth, will be separated from Him and lost forever. As stated before, God made the lake of fire for satan and his angels (Matthew 25:41), and they have no pathway to forgiveness. The ultimate evil antichrist and his false prophet will be the first two occupants of that eternal torment. (Revelation 19:20) One thousand years later, satan will join them (Revelation 20:10), followed by all the lost souls from creation to the final end of this earth. (Revelation 20:11-15)

Please note, all those at the White Throne Judgment will not be able to call out to be saved as there are no more chances for forgiveness or pardons from their eternal punishment. To gamble and put off calling on Jesus could be the absolute worst decision anyone can make. It is each individual’s choice, and must be made while there is still breath in our bodies.

The only two choices are to accept Jesus and have eternal Salvation with Him in paradise forever; or to reject the Savior and choose what this world has to offer and end up with satan forever in torment.

Please know that our Jesus is never too busy to hear our prayers for redemption, and no one who truly calls on Him will be turned away. Today would not be too soon to make that call. We are not guaranteed another day here, and no matter what satan’s followers try to tell you, these are the only two paths as given in Matthew 7:13-14.

The pace of the end of this era is gaining speed daily. The “archangel shout” and “Trumpet of God” could sound at any minute, and the Rapture will take place. After that, the ultimate evil one comes out and rules through satan for 7 long and terrible years. Don’t be here. Be with all the flock that our Savior will call to rise up to meet Him in the air.