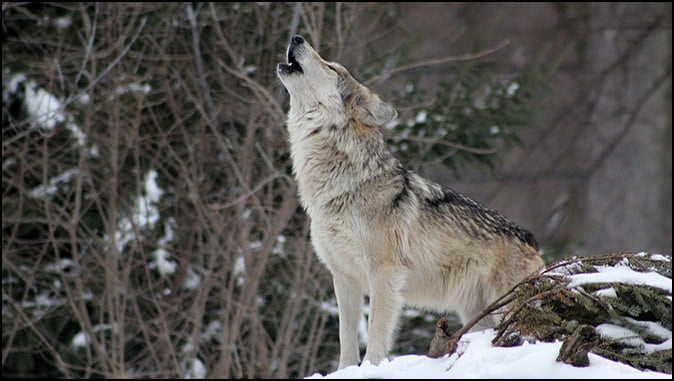 The Wolf Will Come
By Dennis Huebshman

From the time that Jesus said He would again return to the earth, there have been people who have tried to set dates and times. Obviously, as of today, they were all wrong. Some false prophets even convinced people to sell all they had, and to meet at a certain location to be “taken up” at the “predicted” appearance. If we were to look at their motivations, many were for personal gain and various other reasons that were known only to them. None were Biblical.

Looking at 2 Peter 3:3-4, “Above all, understand this; in the last days, blatant scoffers will come, being propelled by their own evil ways; (4) and saying, where is His return? For things have continued as they were from the beginning of creation.”

But have they really continued?

From the beginning of creation to the birth of our Savior, there were prophecies of a coming Messiah. A few examples are:

Isaiah 7:14; the Messiah will be born of a virgin; and He will be called “Immanuel” – God is with us. Also Isaiah 9:6-7; He will be called Wonderful Counselor, Mighty God, Everlasting Father, etc. Fulfillment – Matthew 1:20-23 – Joseph receives a dream about Mary’s pregnancy as being immaculate.

And on and on. For those into mathematics, any person completely fulfilling just 8 of the prophecies, the odds are 1 in 10 to the 17th. power. That’s a lot of zeroes. One person fulfilling 48 prophecies is 10 to the 157th. power, and one person fulfilling over 300 prophecies could only be our Savior during His birth, His life, His death, and His resurrection. Scoffers can say what they wish, but I believe in Jesus. Also the remaining prophecies will happen just as the Father has said they would in His Holy Word to us – the Bible.

Jesus told His disciples that He had to leave earth so that He could prepare a place for them, and ultimately for us as well. John 14:1-3, “Let not your hearts be troubled; you believe in God; believe also in Me. (2) In My Father’s house are many rooms. If it were not so, would I have told you that I go to prepare a place for you? (3) And if I go and prepare a place for you, I will come again, and take you to Myself, that where I am, you may be also.” (ESV)

In their writings after Jesus returned to His Heavenly Home, Paul, Peter, James and John appeared to hold the belief that He possibly would return in their lifetimes. They did not come out with any specific day or time, but felt anything was feasible.

Couple of issues here; prior to May 14, 1948 there was no sovereign nation of Israel, and had not been for about 2000 years. For the Ezekiel 38 war to occur, there has to be a nation of Israel for the coalition – Russia, Turkey, Iran – to attack.

Also, there has to be a nation for the Daniel 9:27 prophecy to be completed; the “strong” covenant or treaty for “one week” or seven years. Also, there has to be a third temple completed for the antichrist to desecrate it midway through the “covenant” or treaty. That temple is yet to be built, but reports are that it could be completed in less than one year. All the implements are prepared and ready for the sacrifices to resume. This does not have to be completed prior to the Rapture, but will most likely be a condition of the “covenant”.

Jesus said when the fig tree sprouts, you know that summer is near. The fig tree blooming is said to be Israel becoming a nation once again; and the generation that saw it would not pass away until all the end time events take place. (Matthew 24:32-34) We don’t know the exact length of that generation, but the clock started counting down May 14, 1948 when Israel was declared a sovereign nation. This was possible because the American President, Harry S. Truman, endorsed that action. Considering who has held the presidential office since then, would you not agree that God made sure the right person was there at the proper time to usher in His chosen people for their return to their own country? Not naming anyone else in particular, but some of our presidents have not been very “Israel Friendly” Our current President has done wonders for Israel, right down to declaring Jerusalem as the rightful capital.

As Peter stated, we have “scoffers” all over this world. Satan’s influence is more out in the open than ever before as his followers are becoming bolder in their anti-Christianism. Christianity – true believers – is being attacked in schools, businesses, politics and just about every venue there is. Alternate lifestyles are no longer considered taboo, as “important” people have endorsed them. Thing is, no so-called movie star, TV personality, politician or anyone else ever put themselves on a cross for my sins

God calls certain acts abominations, and He doesn’t change His mind. For those who do not believe God exists, they have a perfect right to be wrong. God has given us everything we need to be able to learn more about Him. His love for us (John 3:16; Romans 5:8); the sacrifice of Our Savior willingly made for us (John 10:18); and all that was done for every human that has ever lived or will live on this earth (John 10:16) are plainly stated in His promised word. The gift that Jesus gave was for everyone, everywhere. For those who lived prior to Calvary that followed God’s will, they will be saved. From Calvary through the Millennial reign of Jesus, it’s mandatory to receive and accept the gift of Salvation that He dearly paid for.

Bible verses that tell us that Jesus is the only way are John 14:6, Acts 4:12, Romans 8:1 and Romans 5:8, and many others. Our Heavenly Father does not waste our time with foolish myths or entertaining stories that do not lead to Salvation. Everything that is in His Word is pertinent for all who wish to spend eternity in Heaven. Without Jesus, one does not have the Father. (John 3:18; 1 John 5:12) Jesus knew more would choose the lure of this world, than would accept Him for their Salvation. (Matthew 7:13-14)

Finally, as the wolf came to kill the sheep, Jesus will return to save His flock. First, He will take His Church (all believers) away from this sin filled world to keep us from the coming wrath (1 Thessalonians 1:10; 1 Thessalonians 5:9) It will happen in an instant, at the twinkling of an eye as given in 1 Corinthians 15:51-53 and 1 Thessalonians 4:13-17. This could happen at any moment, and the event is truly closer than ever before. He will call us up to meet Him in the clouds; in the air.

At the end of the 7-year tribulation, also known in Daniel 9:27 as the “covenant” between the antichrist and Israel, Jesus will return to step foot on earth to put the “rebellion” down. He will rule and reign for 1000 years while satan will be bound during that time. Satan will be released for a short period of time and will organize a final attack against Jesus, which will be put down with just a word. The devil, his demons and all the evil ones will be sent to the Lake of Fire from the Great White Throne Judgment. (Revelation 20:11-15)

The final judgments will be completed, and there will be a new Heaven and Earth. All followers of Jesus will have an eternal home with Him. There is no third option; heaven or hell; that’s it.

The “big bad wolf” or the “prowling roaring lion” (1 Peter 5:8) is very real. He knows the art of deception, and has used it to his advantage since the Garden of Eden. (Genesis 3) He is very aware his time is getting short, yet even he does not know the exact timing of the Rapture. All his demons and followers are doing all they can to try to erase any signs of Christianity.

Call on the true Shepherd, and ask Him to forgive your sins and to add you to His forever flock. All who call on Him will be saved as given in Acts 2:21 and Romans 10:13. Today would not be too early, as tomorrow is not guaranteed. He’s waiting for your call to keep you from the jaws of the “wolf”.

Gethsemane By Dennis Huebshman For anyone who would like to be truly inspired, there’s a…

New Body – Can Hardly Wait By Dennis Huebshman Philippians 3:20-21; “But our citizenship is…

Unsavable? By Dennis Huebshman There are people in today’s world that actually believe they cannot…