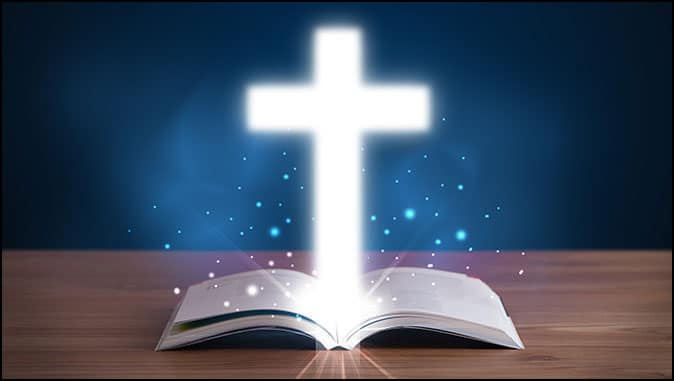 Tell Me The Story Of Jesus
By Dennis Huebshman

John 6: 62-69; “Then what if you were to see the Son of Man ascending to where He was before? (63) It is the (Holy) Spirit who gives life; the flesh is no help at all. The words that I have spoken to you are Spirit and life. (64) But there are some of you who do not believe; for Jesus knew from the beginning who those were who did not believe, and who it was who would betray Him. (Also see Matthew 7:13-14) (65) This is why I told you, that no one can come to Me unless it is granted by the Father. (66) After this, many of His disciples turned back, and no longer walked with Jesus. (weren’t saved to begin with) (67) So Jesus said to the twelve, ‘Do you want to go away as well?’ (68) Simon Peter answered Him, ‘Lord, to whom shall we go? You have the words of eternal life, (69) and we have believed and have come to know that You are the Holy One of God’.” (All believed except Judas – all emphasis mine)

Paul testified in 1 Timothy 2:5-6; “For there is One God, and there is One Mediator between God and men/women, the man Christ Jesus. (6) Who gave Himself as a ransom for all (including Me), which is the testimony given at the proper time.”

In today’s world, we see people turning away from the true word, and seeking those who will give unbiblical, yet entertaining, messages. Paul says in 2 Timothy 4:3-4; “For the time is coming when people will not endure sound teaching, but having itching ears, they will accumulate for themselves teachers to suit their own passions, and will turn away from listening to the truth, and wander off into myths.”

There are “evangelical” churches today that used to teach God’s pure word, and now are teaching that things considered sinful before, are suddenly okay with God. One major issue, besides accepting the LGBTQ agenda, is they’re saying that Jesus is not necessary for our Salvation. It’s as if satan himself has taken over the pulpits spewing out his lying garbage.

Isaiah 59:2; “But your iniquities have made a separation between you and your God; and your sins have hidden His face from you, so that He will not hear.” Unless you have His Son as your Savior, or are asking Jesus to forgive and save you, your prayers are bouncing off the ceiling.

Hebrews 10:26; “For if we sin willfully after we have received the knowledge of the truth, there is no more sacrifice for sins.” This does not mean we will not sin after being saved, but we will have turned from habitual and continuous sin. (Romans 3:23) Also, believers have 1 John 1:8-10 as a promise that gives forgiveness.

There are numerous verses in the Bible about Jesus being the only way to the Father. Without a doubt, we are under the grace of Jesus and the mercy of the Father. No other so-called god is real, and all who worship false gods are servants of satan, and will spend eternity with him and his demons in hell.

Starting with 1 Timothy 2:5; “For there is One God, and there is One Mediator between God and men/women, the man Christ Jesus.”

Then my life verse, John 14:6; “Jesus said I am the Way, the Truth and the Life; no one comes to the Father except through Me.” This is followed by Acts 4:12; “And there is salvation in no one else, for there is no other name under Heaven given among men/women by which we must be saved.”

People say, how can I be sure Jesus exists? They must have faith which can be strengthened daily as given in Romans 10:17; “So faith comes from hearing; and hearing through the word of Christ.” By getting into God’s true word in a true translation you can understand; the Holy Spirit will assist you in your understanding if you will only ask. Before reading scriptures on a daily basis, I ask the Spirit to enlighten me as to what the Father wants me to learn from the passages. Hebrews 11:6; “And without faith, it is impossible to please Him; for whoever would draw near to God must believe He exists, and that He rewards those who seek Him.”

The 10th chapter of John is a good part of the Bible to learn more about why our Savior came to earth as a human, yet He remained fully God. Verse 16 tells us He came to save all who would accept Him. Verse 18 lets us know He came willingly, even though He knew the suffering He would have to endure. Verse 30 plainly states; “I and the Father are One.”

Jesus knew it would be hard for some to believe in something they can’t see and touch. In John 20:28-29, “Thomas answered Him, My Lord and My God! (29) Jesus said to him, have you believed because you have seen Me? Blessed are those who have not seen, and yet have believed.”

Frances (Fanny) Crosby (1820-1915) was a marvelous poet who had many of her poems become traditional hymns. As a review, at 6 weeks of age, and through the act of an incompetent so-called physician, she became permanently blind. This did not cause her to live a live of self-pity, and she even forgave the one who caused her blindness. She was educated at the New York Institute for the Blind, and she even became a teacher there. She wrote over 8,000 poems, many which became hymns that we are inspired by today. One such poem/hymn is “Tell Me The Story Of Jesus”. It’s a bit lengthy, but every word is a part of getting to know our Jesus better. After 140 years (it was written in 1880), it’s as relevant today as ever.

(1) Tell me the Story of Jesus; write on my heart every word. Tell me the story most precious; sweetest that ever was heard. Tell me how the angels in chorus; sang as they welcomed His birth. Glory to God in the highest; peace and good tidings to earth.

(2) Fasting alone in the desert; tell of the days that are past. How for our (My) sins He was tempted; yet was triumph at last. Tell of the years of His labor; tell of the sorrow He bore. He was (and is) despised and afflicted; homeless, rejected and poor. (only by earth’s standards)

(3) Tell of the cross where they nailed Him; writhing in anguish and pain. Tell of the grave where they laid Him; tell how He liveth again. Love is that story so tender; clearer than ever I see. Stay, let me weep while You whisper; Love paid the ransom for me.

(4) Tell how He’s gone back to Heaven; up to the right hand of God. How He is there interceding; while on this earth we must trod. Tell of the sweet Holy Spirit; He was poured out from above. Tell how He’s coming in glory (Rapture); for all the saints of His love.”

After all is said and done, please remember that the Creator of this earth, sent a part of Himself here as our sacrificial “Lamb”, that would remove the sins of all who would receive and accept Him. (Psalm 103;11-12; Joel 2:32; Acts 2:21; Romans 10:9-13) It’s only fitting and proper that the Father requires us to accept the gift that was given at Calvary in order for us to be with Him forever. No works or any earthly “treasure” can purchase what Jesus fully paid for on our behalf.

All who refused to follow God’s word prior to Calvary, and all who have and will reject Jesus all the way to the end of the Millennium, will go into the Lake of Fire forever. (Revelation 20:11-15)

Jesus came as a sacrifice for sins that we could never atone for. He will return as a Conqueror to shut down the rebellion of the 7-year tribulation; and also to shut down the final attempt by satan to overcome Him at the end of the 1000 year reign.

No one goes into hell except by their own choice. Look around; how many are turning against anything that pertains to Jesus? They can be forgiven just like the thief on the cross if they will truly call out before their last breath hear. At that point, our forever is set, and cannot be changed. It will either be Heaven with the Savior, or eternal punishment in hell. No other option exists.

Today, right now, call on the one who wants to give you an eternal paradise. He will in no way force anyone to call out to Him, but will accept all who truly do.