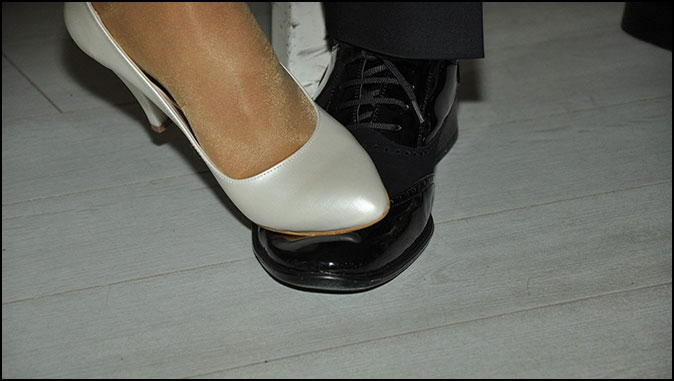 Stepping On Toes
By Dennis Huebshman

Acts 4:19-20; “But Peter and John answered them; ‘Whether it is right in the sight of God to listen to you rather than God, you must judge; (20) for we cannot but speak of what we have seen and heard’”

1 Thessalonians 2:4; “But just as we have been approved by God to be entrusted with the gospel, so we speak; not to please man, but to please God who tests our hearts.” (James 3:1 says that those who teach the word will be judged by greater strictness.)

John 5:44; “How can you believe, when you receive glory from one another, and do not seek the glory that comes from the only God?”

Galatians 2:20; “I have been crucified with Christ. It is no longer I who live, but Christ who lives in me. And the life I now live in the flesh, I live by faith in the Son of God, who loved me, and gave himself for me.” (all emphasis mine)

Several years ago, I was a guest pastor in a Cowboy Church. After giving the message, and the service had ended, one of the church members approached me and said, “You don’t care if you step on toes, do you?” My answer was plain and simple; “Not if I am giving the true word from God’s scriptures.”

Sadly, there are a number of “churches” today that are getting away from the bible. Services are “entertainment sessions”, with up-beat music and sermons that don’t mention sin, salvation or what it means to be truly saved. Some are twisting passages to fit what the “leaders” want, which will inspire the membership with feel-good messages to keep seats and collection plates filled.

“Keep them happy; don’t mention anything about condemnation; all of the abominations are “old testament” stuff, and don’t apply anymore; and there’s many ways to heaven with or without Jesus.” Every bit of this is satan-inspired, using his false prophets that Jesus, Paul, James, John and Peter warned us about in the New Testament. On the Sunday after the rapture, there won’t be any change in the attendance of the members that will be present in those churches.

The significant factor is, who do you believe? Paul tells us in 1 Corinthians 1:18; “For the word of the cross if folly to those who are perishing; but to us who are being saved, it is the power of God.”

There are more people who accept satan, even if they don’t think they are his followers, than those who accept Jesus as their Savior. The Lord spoke of this in Matthew 7:13-14, when He described the difference between the “straight and narrow path” verses “the broad path that leads to destruction”.

Satanic activity has been in the open and on the increase over the past several years. Some don’t even try to cover it up. Until about a decade ago, I had never heard of a “church of satan”, and “wiccans” were mostly in movies. Now, we have “protests” in various places around our country with signs being held up that are telling God to get out. For anyone who has studied end-time prophecy, this is disturbing, but not unexpected. In fact, it will only get worse.

Our nation was formed to overcome religious persecution, and all were guaranteed to be able to worship – or not – as they were led to do. Prayer and the bible were often used to present how our government should react to certain issues. No particular religion was favored, but the existence of an “Almighty Creator” was accepted, and no one cried “foul” when His name was mentioned, or scripture was used.

Today, there have been articles in the “news” that state congresspeople are saying God has no place in our government. This is not even being denied by those who are saying so. Anything that pertains to Jesus or even the mention of the word “Christian”, sparks protests. A true Christian loves everyone for their immortal soul, but we don’t have to like or accept their lifestyles that we see as going against God’s word.

Jesus loved everyone He ever came in contact with, including Judas, His betrayer. I firmly believe that had Judas repented and asked forgiveness from the Savior, he would have been saved. However, the Savior knew that Judas had never really accepted Him, and followed Him only for whatever he could take from the money bag. He knew Judas was satan led. The same could be said of the religious leaders. If they repented after the crucifixion, they would have been saved.

One of the best illustrations of this was Saul of Tarsus – later Paul the apostle. He was a dye-in-the-wool Pharisee, and held the coats of those who stoned Stephen. He was a persecutor of any and all members of the “Way”, as Christians were called before Antioch (Acts 11:26), until he had a “meeting” with the Lord on the road to Damascus. He became one of the Savior’s most devout evangelists, and was responsible for writing most of the New Testament. He just had to be shown that his beliefs were wrong, and Jesus was truly his Lord and Savior.

We are getting to the point in this world where stepping on toes should be the least of our worries. Everything mentioned in end-time prophecy; every act; changing weather patterns; increased earthquake activity; volcanic activity increasing; people turning away from Jesus; and on and on are all present right now. The bible prophecy reads like today’s headlines, if you can get the true news from our faux reporters. WE are that close to the tribulation starting; which means we are even closer to that than the Rapture taking place.

Having a “sore toe or two”, but understanding the need to have Jesus as your savior is absolutely worth the effort. My plea is for everyone to read Romans 10:9-13, and call on Jesus today. We don’t know exactly when He will be calling all believers up to meet Him in the air, but by Biblical terms, it’s closer than imminent.

It’s not too early to ask His forgiveness, and to be your Savior. Tomorrow could find you that He already came, and you became left behind. Call Him now – He’s waiting and listening. The only unforgivable sin is to not have Him as your Savior before you leave this earth. Hope to see you at Home!