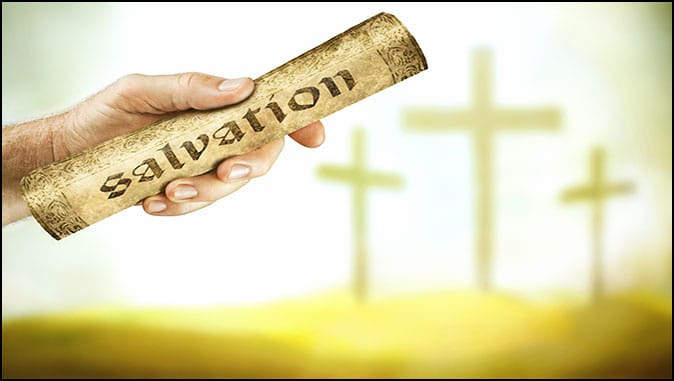 Simple Yet Powerful
By Dennis Huebshman

In numerous messages, an uncomplicated statement has been presented that is known as the “ABC’s of Salvation”. One problem today is, there are those who are trying to complicate what Salvation is really all about. What they overlook is a very simple statement that tells us Jesus paid “In Full” for the souls of all who will receive and accept His wonderful gift. “The price for my pardon, was the blood of my King”, is a line from a song by Dale and Cheryl Golden, and is the absolute truth. Rounding this out, Paul told us in Romans 8:1, “There is therefore now no condemnation for those who are in Christ Jesus.” (all ESV – emphasis mine)

With all that’s taking place in this sin-filled world today, there are those who are looking for some sign of Hope. The main message is the Gospel is simple enough for a child to understand, and those who try to complicate it are not doing any service to the Lord.

A couple of preliminary verses before reviewing the steps to be saved. First, Romans 10:10; “as it is written, none is righteous, no not one.” This was taken from Psalm 14:1-3 and Psalm 53:1-3. Please let me emphasize something I have stated in the past. When God says something, we need to take note of it. When He repeats something, especially several times, we need to give extra attention because He considers this critical for us to know.

Next, for those who believe they are good and don’t really sin, Romans 3:23 states; “For all have sinned and fall short of the glory of God.” Follow this up with Romans 6:23, and we see consequences and reward in the same verse; “For the wages of sin is death; but the free gift of God is eternal life in Christ Jesus our Lord.”

Before anyone thinks the “death” mentioned here is just to disappear as if we never lived, our souls will exist in one place or another forever. Revelation 19:20 tells us about the false prophet and the beast, also known as the antichrist, being cast alive into “the lake of fire that burns with sulfur”. They are the first two occupants of hell, and Jesus said this was prepared for the devil and his angels in Matthew 25:41.

The next occupant of hell will be satan one thousand years later. He will be followed by all who disobeyed God’s will pre-Calvary, and all from Calvary to the end of the millennial reign of Jesus, who refused the gift that was offered them. (Revelation 20:10-15) It will be a very long line that Jesus Himself told us about in Matthew 7:13-14. This was his message about the straight and narrow pathway that leads to eternal life verses the broad pathway that leads to destruction.

All at the Great White Throne will be shown exactly why they are there, and what their eternal punishment will be. None of these souls will have been written in the “book of life” as given in Revelation 20:12. Going to verse 15, it states; “and if anyone’s name was not found written in the book of life, he was thrown into the Lake of Fire.”

A couple more points; no matter what any false prophet may try to tell you, hell is very real, and without Jesus it will be a person’s home forever. There are not many ways to Heaven without Jesus, as He is the only way. (John 14:6; Acts 4:12) Any who try to say that what God called “abominations” are now perfectly all right, are liars. God does not change His mind. Sin is sin no matter how great or how small, and our perfect and faithful Creator cannot tolerate any sin. And, no matter what we try on our own to gain our Salvation, we can never satisfy God’s requirement of perfection. Also, there is no way to “buy” it as was illustrated in Acts l8:17-24. Simon the magician saw that the Holy Spirit was given to people after the apostles laid their hands on them. He offered to “buy” this power, but in verse 20, “Peter said to him, may your silver perish with you, because you thought you could obtain the gift of God with money.”

To go to the positive side leading to Salvation, first we look at Ephesians 2:8-9; “For by grace you have been saved through faith. And this is not your own doing, it is the gift of God, (9) not a result of works so that no one may boast”.

So, why would the Lord God Jehovah care so much about a bunch of humans? First, John 3:16-17; “For God so loved the world, that He gave His only Son, that whoever believes in Him shall not perish, but have eternal life. (17) For God did not send His Son into the world to condemn the world; but in order that the world might be saved through Him.”

Sounds wonderful, but there is a disclaimer in verse 18. “Whoever believes in Him is not condemned, but whoever does not believe is condemned already, because he has not believed in the name of the only Son of God.”

Looking at 1 John 1:5:1; “Everyone that believes that Jesus is the Christ has been born of God; and everyone who loves the Father, loves whoever has been born of Him.” Going to 1 John 5:11-12; “And this is the testimony that God gave us eternal life, and this life is in His Son. (12) Whoever has the Son has life; whoever does not have the Son of God does not have life.”

So, this we know right now; God loves us, Jesus shed His pure sinless blood for us, and if we receive and accept the Son, we have eternal life in Heaven. It’s a covenant for believers, and God cannot lie. (Titus 1:2)

Romans 10:9-13 contains the simple ABC’s of Salvation. “(9) because if you confess with your mouth that Jesus is Lord, and believe in your heart that God raised Him from the dead, you will be saved. (10) For with the heart, one believes, and is justified, and with the mouth, one confesses and is saved. (11) For the scripture says everyone who believes in Him will not be put to shame. (12) For there is no distinction between Jew and Greek, for the same Lord is Lord of all who call on Him.” Verse 12 is saying everyone in this world can be saved, if they choose the Savior.

So far, we have the A; confess, which is to admit. God is not mocked (Galatians 6:7) as He already knows what we have done, but desires that we admit to Him we know we have sinned, and need a Savior. Also we have the B, in that we must believe God raised Jesus from the dead after He gave Himself in our place. Jesus suffered for sins He never committed to give us something we can never obtain for ourselves without Him. All He asks in return is we accept Him and what He did, and to develop a loving relationship with Him. We must believe this is ours for the asking as it is a gift.

In summary, Admit we’re sinners and confess that Jesus is our only way to the Father. Believe Jesus led a sinless life here, and that He shed His blood for us at Calvary, when every sin that will ever be committed on this earth was laid on Him. Call on Jesus in true sincerity to be our Lord and Savior forever.

There is no other way. It’s very simple, but as I stated, “too simple” for some. Paul explains in 1 Corinthians 1:18; “For the word of the cross is folly to those who are perishing, but to us who are being saved, it is the power of God.”

Right now, the unforgiveable sin is to die without having received and accepted Jesus as Savior. That is automatically a spot in line at the White Throne. During the Tribulation, willingly taking the mark of the beast will also be unforgiveable.

It’s all so easy to avoid all the pain and eternal suffering. Re-read Romans 10:9-13, then go to John 14:6 and Romans 8:1. God wants no one to be condemned (2 Peter 3:9), and will gladly accept anyone who will repent and call on His Son. No one has sinned so terribly that He won’t forgive them if His Son becomes their Savior. He is available 24/7, and unlike the phone company, His lines are always open and in working order.

Call right now; it isn’t too early, and not too late if you are still alive. Jesus will be calling all who have followed the simple ABC’s very soon. That will be the Rapture of all believers as given in 1 Thessalonians 4:13-17 and 1 Corinthians 15:51-53. It will be the wisest decision you will ever make, and a choice that will last forever!