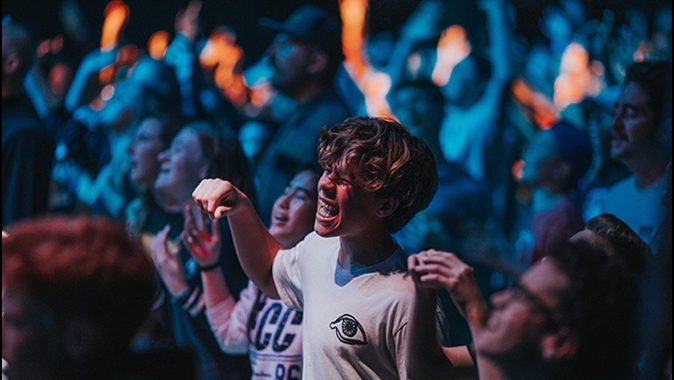 When someone calls out for Jesus to be their Savior (Acts 2:21; Romans 10:13), there is joy that takes place in Heaven because another soul has “escaped” from the Lake of Fire. The angels that remained faithful to the Father after the fall of satan (Ezekiel 28:12-17; Isaiah 14:12-15), truly worship and honor God, and carry out His will without question. They feel privileged to do so, and are in His presence, and can see first-hand the paradise that lies ahead for all true believers. Also, as stated in 2 Peter 3:9, God doesn’t want anyone to be condemned.

It is apparent that just as we have free-will to accept or reject Jesus, all the Angels were given free-will as well. We’re told in Revelation 12:4 that the “red dragon” (satan) swept down about a third of the “stars of Heaven” (angels). Those who followed Lucifer have become the demons spoken of throughout the Bible. They have no pathway to forgiveness as we humans do. As mentioned, they had been in the presence of the Father, and still chose satan over Him, and they will ultimately suffer the same fate as the evil one.

The unforgivable sin is for all humans to take their last breath on this earth without ever having received and accepted Jesus as their Savior. Prior to Calvary, a person had to follow the will of God, and not worship any other gods that were created by man. The Heavenly Father made it very plain that He was the only true and living God; and those made up of metal, wood or whatever were false gods. He even made it plain that “symbols” were not to be worshiped under any circumstances.

Exodus 20:3-6, “You shall have no other gods before Me. (4) You shall not make for yourself a carved image, or any likeness of anything that is in Heaven above, or that is on the earth beneath, or that is in the water below. (5) You shall not bow down to them, or serve them; for I the Lord your God, am a jealous God; responding to the transgressions of fathers/mothers by dealing with children to the 3rd. and 4th. generations of those who reject Me, (6) and showing covenant faithfulness (His divine promise) to a thousand generations of those who love Me, and keep my commandments.” Deuteronomy 4:28, “There (in other lands) you will worship “gods”, made by human hands – wood and stone – that can neither see, hear, eat or speak.”

One could say right here, that any pictures depicting Jesus, metal crosses or the like, would be sinful in and of themselves. However, whenever I see a cross, a picture or anything that represents Heavenly things, it serves as a reminder only, that the one represented by them deserves my total worship and honor. It’s not the “object” that I worship, but rather the One who willingly went to the cross to give me a pathway to Him. My Jesus, I will worship forever. When I see any man-generated depiction of the Savior, I say, “Thank you My Jesus for loving me that much.” No matter how nice the jewelry or whatever is, the real cross was an ugly piece of wood that My Jesus bled and died on.

The shouting and rejoicing and joy that goes on right now in Heaven for any person who asks Jesus into their heart, will not be anywhere near the same type of atmosphere that will take place at the Great White Throne. The very first occupants of that hell will be the final antichrist, and his false prophet. (Revelation 19:20) Then, the one who the eternal fire was actually prepared for (Matthew 25:41) will be next (Revelation 20:10), followed by all his demons and every lost soul from the beginning of earth’s creation to that terrible judgement day. (Revelation 20:11-15) There is no way to properly describe the despair that will take place. However, everyone at that judgment will be shown exactly why they are there, and why no “excuse” whatsoever will be accepted. All had the opportunity to miss that judgment, but chose to be there.

The “saved” will rejoice and will witness a new Heaven and a new earth, that will be totally sin-free, and where we will be forever. (2 Peter 3:13; Revelation 21) There will be a new Jerusalem come down to the new earth (Revelation 21:2; 10-27) where our Savior Himself will be with us.

No more pain, death, sin or anything negative. Just eternal praise, worship, glory and all in the presence of our Jesus. We will be with the “Light of the world”, and the Lake of Fire will be in eternal darkness.

For all who make jokes about this, and say they would rather be in hell so they can “party” with their friends, have no idea of just how horrible it will be. It will be in total darkness, and the pain and suffering and hopelessness will go on forever. There will not be any little “devils” prodding people with pitchforks. Everyone from satan to the last soul placed there will be in their own torment.

From Calvary forward, the only pathway to the Father has been, and always will be, through Jesus. (John 14:6; Acts 4:12 and Romans 8:1) Even with the true word that we have available through the Holy Bible, false prophets will twist the content to fit their own sinful desires. At the present time, satan is pulling out all the stops as he is aware the end time is near. He does not know the exact day or hour, but signs are here saying the Rapture is near, and he will then be on a definite countdown. Meanwhile, his demons and human followers are getting more active daily.

This world is going through some heavy situations right now, but nowhere near the intensity that will take place during the Wrath/Tribulation years. It’s so unnecessary for anyone to have to endure that time. All who enter the tribulation will have consciously or subconsciously chosen to be there. They will have bought into all the lies and earthly desires that satan gives them. How about, All religions worship the same god; there’s many ways to heaven without Jesus; the abominations listed in the bible are ancient, and no longer apply; you have plenty of time to get “religious” later – enjoy life now.

Romans 10:9, “because if you confess with your mouth that Jesus is Lord, and believe in your heart that God raised Him from the dead, you will be saved.” There are no special or secret rituals that have to be performed, and there is no earthly price you can pay for your Salvation. Going on to Romans 10:13, “For everyone who calls on the name of the Lord will be saved.” This is also found in Joel 2:32 and Acts 2:21. As I mentioned earlier, when God repeats something, it’s worth taking note of.

For some reason, humans all the way back to the beginning, believe there have to be rituals, pomp and circumstance, or something visible that has to be the object of their worship. Jesus did the hard part for all of us when He shed His precious sinless blood for us. He gave us the gift of a pathway to Him, and an eternal home with Him if we but accept Him. All other ways that try to side-step the path to the Father, Son and Holy Spirit lead to destruction. (Matthew 7:13-14)

Don’t make it more difficult trying to get Salvation “man’s way”. Call out to the only One who can truly save you, and be welcomed into the loving arms of the One who loved us all the way to the Cross. He arose the third day to conquer sin and death for all who will call out to Him. Tomorrow could just be too late as we do not know when He will call for all True Believers to rise up to meet Him in the air. Today would not be too soon to call on Him.

It Is Finished By Dennis Huebshman John 19:28-30; “After this, Jesus knowing that all was…

The Trial By Dennis Huebshman The bailiff steps forward, and there is a tension present…

Follow The Truth By Dennis Huebshman Galatians 1:6-9, “I am astonished that you are so…