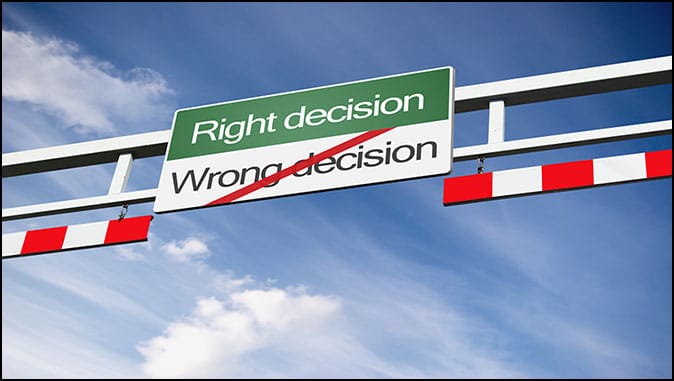 Right To Be Wrong
By Dennis Huebshman

There’s an old expression that states some people would argue with a fencepost. It has nothing to do with facts that are pointing one way or another, but the important thing is to continue to argue long and loud. I have a saying for this; everyone has the right to be wrong, just don’t expect me to accept all your ideas. (ESV – all emphasis mine)

Matthew 23:24 is a verse I truly enjoy which states; “You blind guides; straining out a gnat, and swallowing a camel.” This was given by Jesus to the scribes and pharisees in the middle of His “Woe Be’s” lecture. Is it any wonder they couldn’t allow Him to exist much longer? If they did, their world would come crashing down around them. They didn’t fully realize they were fulfilling prophecy that they should have known about, as it was contained in the scrolls they supposedly had read. They were too concerned in setting Jesus up for crucifixion.

There are so many false issues going around today that are practically screaming that the end of this age is just about upon us. False prophets have entered some mainline evangelical churches with “news” that all the abominations that God spoke of in His true word, no longer apply to today’s society. That was the ancient world, and doesn’t apply to our ‘enlightened’ people of today. Right?

Immorality is just an old fashioned word that clearly does not apply. After all, if we have a God of love, would He not honor all love relationships? The alphabet group would even have you believe it’s proper for an adult to have “relations” with children, as long as it’s done with love.

Isaiah 5:20 speaks volumes to this, and all their other so-called updated messages; “Woe to those who call evil good, and good evil; who put darkness for light, and light for darkness; and bitter for sweet, and sweet for bitter.” In other words, man can label his actions any way he wants, but God will ultimately have the final word.

Speaking of harming children, It would be wise to remember how much our Savior loved all the little ones, and what He thought of anyone who would cause them harm. Just read Matthew 18:6; Matthew 18:10 and Matthew 19:14 for His exact words.

Going back a number of years, there was a movie called “O God”. It was not biblical by any means, but there was one good point made about false religious preachers. George Burns played the part of God, and John Denver was a person He used to get His message out. He told Denver to go to a certain “mega-buck” preacher with a message about his preaching. He said that the preacher used a “lot of words”, just not God’s words. He specifically told Denver to tell the preacher to “Shut Up!”.

The day will come when there is a judgment at the Great White Throne, where God will not use an “agent” to discipline false prophets. He will be the one to list all their blasphemies just before sentencing them to the lake of fire. There will be no forgiveness or pardons at that judgment. It will be final and forever.

Our Heavenly Father does not expect any of us to know every detail contained in the 66 books of His message to us. If someone wishes to discuss His word, be sure to follow 1 Peter 3:15; “but in your hearts, honor Christ the Lord as Holy; always being prepared to make a defense to anyone who asks you for a reason for the Hope that is in you; yet do it with gentleness and respect.”

However, each of us should be able to give the simple steps, or ABC’s, of Salvation, and know where to direct someone to look. Just before that, we need to be sure that we know exactly who Jesus is. Start with John 1:1-3; “In the beginning was the Word; and the Word was with God; and the Word was God. (2) He was in the beginning with God. (3) All things were made through Him, and without Him, was not anything made that was made.”

In the beginning? How about Genesis 1:26a; “Then God said, let Us make man in Our image after Our likeness.” This is the first indication of God being multiple persons. We don’t understand this totally, but He is God, and capable of anything. When Jesus speaks of His Father, and also a “Helper” that will come to live within us, we can be assured this is very real. (John 14:16; John 16:7)

John 10 is a chapter that gives good illustrations about Jesus being Our Shepherd, and all His followers are His flock. Verse 16 ties us all together as being one flock; One Shepherd. When someone says Jesus never said He was God, they haven’t read John 10:30; “The Father and I are one.”

WE need to remember several verses in Romans that state we’re all sinners, and we deserve the death penalty – eternity in hell. However, through the grace and mercy given us through the sacrifice Jesus made for us, we can be given forgiveness of all our sins, and have a home in Heaven with our Savior. (Romans 3:23; Romans 6:23)

From there, we go to Romans 10:9-13 for the ABC’s. First, admit (confess) that we are all sinners, and we need a Savior. Second, believe and have the faith that Jesus is the true and only Son of God, who raised Him from the dead to conquer sin and death for us once and for all. Third, call on the name of the Lord to be your Savior, and you will be saved. This will put someone on the straight and narrow road Jesus spoke of in Matthew 7:13-14.

For some, this is just too easy, and they believe there must be more that we have to do. Some religions have strict measures that must be carried out to even be eligible for their paradise. They never know if they’ve done enough to qualify for this. Ephesians 2:8-9 is our go to verses that tell us we cannot earn or buy our Salvation, so that we cannot boast about our own efforts to gain Salvation. It’s a free gift from God for all who will accept Jesus as Lord and Savior.

Finally, we have to receive the gift and accept it. This will in no way make us perfect and sinless while we are in these human bodies on this sin-filled world. However, the Father gave us 1 John 1:8-10 as a means to seek forgiveness for when we do slip and sin. We are to ask forgiveness, and the Father will do so for all who are a part of the Savior’s flock.

For those who will not accept Jesus, or who believe that there are “many ways” to Heaven without Him, Revelation 20:11-15 is their ultimate destination. That’s the White Throne Judgment spoken of earlier.

It’s absolutely each person’s choice as to the eternity where they will be. God allows us the choice, and will allow anyone the right to be wrong. Personally, I choose Jesus, and know in my heart that when He calls His flock up to meet Him in the air to avoid the tribulation period, I will be with Him forever. It’s a promise made by God, and He cannot lie. (Titus 1:2)

Please take a moment out of your daily routine and, if you have not done so yet, call on Jesus to be your Savior. He is always ready to accept anyone who truly calls on Him. Today would not be too early as we’re not promised tomorrow. You will have established an eternal address with Jesus. He will personally prepare a place for you in Heaven. (John 14:1-3)