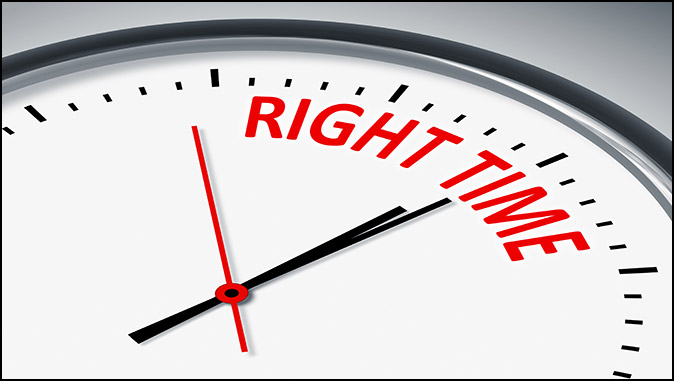 Right On Time
By Dennis Huebshman

John 11:11-15; “After saying these things, He said to them, ‘Our friend Lazarus has fallen asleep, but I go to awaken him.’ (12) The disciples said to Him, ‘Lord, if he has fallen asleep, he will recover.’ (13) Now Jesus had spoken of his death, but they thought that He meant taking rest in sleep. (14) Then Jesus told them plainly, ‘Lazarus has died, (15) and for your sake, I am glad that I was not there so that you may believe. But let us go to him’.” (ESV – all emphasis mine)

We have heard of Jesus going to Bethany and raising Lazarus from the dead. Prior to getting there, the sisters of Lazarus sent for Jesus because they knew their brother was seriously ill. They had hoped the Savior would come quickly and heal him, before it was too late. However, the Savior purposely took extra time to get to Lazarus, and when He did arrive, Lazarus had been in the grave four days. (v.17)

The sisters’ patience had been stretched to the limit, and they couldn’t understand why Jesus took so long to arrive. They believed that after Lazarus had been dead four days, that he would not live again until the final resurrection. All who were there did not fully grasp just who Jesus really was. He had performed miracles of healing and such, but at no time before this, had He raised anyone who had been dead for more than a few hours. Some would not fully believe in Him until He Himself was raised from the dead after His crucifixion.

Jesus gave praise to the Father, and then called Lazarus to come out of the tomb. Even though this was truly a miracle that could only have been done by our true God, there was still unbelief, and the movement to kill Jesus grew stronger among the Pharisees. Also, think about Lazarus for a moment. He had passed from this earth, and his soul was possibly at rest; and then he had to return. He would have to go through the process of dying all over again at a future time.

The importance the religious leaders placed on their positions of authority on this earth was their strongest desire, and their greatest downfall. They could not see past what this earth had to offer. Except for a very few that finally accepted Jesus for who He really was, it’s obvious the majority of the leaders will be at the Great White Throne Judgment in that long line waiting for their final condemnation.

Those who are familiar with the raising of Lazarus, most likely would say that the people of that time should have seen the signs, and realized just who Jesus really was. It should have been absolutely obvious that a real miracle had taken place, and only the true living God could have done it. However, the temptations of satan have been here since the Garden of Eden, and he is a very strong influence in some people to desire the pleasures of this earth instead of eternal life; and it will be like this until the absolute end of this earth at the end of the Millennium.

Taking all this into account, everything that is happening on earth today should be obvious that the end of this age is very near. All the negative attitudes of 2 Timothy 3 are present, and getting more prevalent by the day.

Earthquakes, extreme weather patterns, plagues of locusts and viral infections are in today’s news. War and rumors of wars are all around the globe, and there are famines that are affecting our food supply. Lawlessness is increasing at a frightening rate, and Christians are hated by all the secular people.

We have not reached the point where the lawless one will arrive, and through satanic influence, he will control the whole world. However, we are right at that doorstep according to Matthew 24; Luke 21; 2 Peter 3 and 1 John 2-5. As Jesus said in Luke 21:28; “Now when these things begin to take place, straighten up and raise your heads, because your redemption is drawing near.” It is no question that all the signs have definitely begun.

Each day, we are getting closer to the 1 Thessalonians 4:13-17 and 1 Corinthians 15:51-53 event, commonly called the Rapture. According to 2 Thessalonians 2:7, the “lawless one”, or antichrist, cannot appear until that which is restraining him is removed. That would be the Holy Spirit, and by removing Him, all that He indwells would be removed as well. That would be all true believers who have called on the Lord and are saved. (Romans 10:9-13)

So the question remains, when will this all take place? We may not be able to see things as our Heavenly Father does, but no matter what, it will happen “Right On Time”. This was the title of a song by the McKamey’s from 1997. Its message to us is, no matter what, Jesus will be right on time.

1.) They sent for Jesus; Your friend’s about to die; but tarried He still on behind. So they laid Lazarus in a tomb; and they said their last goodbyes; but coming down the road was Jesus, right on time.

Ref) Just hold on my child, because He’s not too far away, and He knows your need before you pray. So when your feet are weary, from the mountains you have climbed; look ahead, here comes Jesus, right on time.

2.) I’ve struggled through life’s deserts; they were so hot and dry; till it seemed all hope was gone and I would die. Had I wondered where was He; is He still a Friend of mine? Then coming down the road was Jesus right on time. (ref)

Patience is not one of my strongest virtues, and right now would not be too early for the Savior to call us up to meet Him. However, I have to remember that if this had happened prior to my calling out to be saved about 35 years ago, my eternity would not have been so wonderful.

God wants no one to be lost (2 Peter 3:9), and it’s believed He may be giving some souls much-needed time to call out and be saved. However, He will not wait past the time He has firmly set, and then this world will go through a terrible 7-year period of tribulation as has never been here before.

Jesus is waiting for your call; if you will call him now, you will become a part of His forever flock; and it will be Right On Time!

Just About Any Day Now

Just About Any Day Now By Dennis Huebshman With each passing day, we’re seeing more…