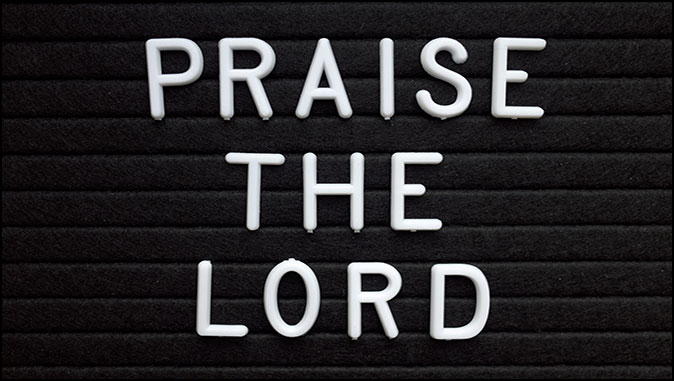 Praise The Lord
By Dennis Huebshman

Just over a year ago, I submitted a message entitled, “To God Be The Glory”. That was based on a praise song by Fannie Crosby, written in 1875. It’s still a favorite Hymn of mine today, and will be included in this message. Sometimes it is introduced as “Praise The Lord”. Either way, it’s full of inspiration for today’s declining world, and is worth revisiting. (all emphasis mine)

For anyone to take a look at world events today, and not see all that Jesus and others said would be happening near the end of this age, that person just might be under the “deluding influence” of 2 Thessalonians 2:11-12. There has been a shift away from anything to do with our Savior, and a move more towards everything of this earth, especially just within the past decade or so. The overall evil is increasing not only daily, but hourly.

To be certain, there has been evil influence on earth ever since the first sin in the Garden of Eden in Genesis 3. The warfare has been spiritually led on the evil side by a fallen arch angel – Lucifer, Satan, the Devil. God has allowed satan a certain amount of latitude, and we are about to have the 7-year all out “hell on earth” that is to take place just before the actual second coming of our Savior to rule from Jerusalem for 1000 years.

Satan will be bound for that millennium, and will be released for a “short time” at the end for one final action. (Revelation 20: 1-3; 7-8) After that, he and all his demons (fallen angels), and all who chose him over the Savior will be condemned to the lake of fire forever. (Revelation 20:10-15)

Anyone who has received and accepted Jesus as their eternal Savior, has no need to fear that 7-year wrath/tribulation period. God has promised we will not be here for it in 1 Thessalonians 1:10; 1 Thessalonians 5:9-10; and Revelation 3:10. We will be taken up “in the twinkling of an eye” prior to that terrible time to be safe in the arms of Jesus. (1 Thessalonians 4:13-17; 1 Corinthians 15:51-53)

As for the millennium, those who were raptured by the Savior may return here, but not as the humans we were before. When we are “taken up” to meet the Lord in the air, we will be converted into forever immortal bodies, that will never feel pain nor will die again. Our mindsets will be like the Savior’s, and we will not be subject to fall into temptation ever again.

Revelation tells of the “armies of Heaven, arrayed in fine linen, white and pure, were following Him on White Horses”. (Revelation 19:14) This army is not going to be with Jesus to go into battle, but to be here to “witness” the Lord defeating the enemy with just a word. During the 1000 year reign, Jesus’ army will be here to serve Him as He directs. Personally, I long to be in His service forever, and if we are to be a part of this “army”, it will be a joy and honor to serve My Lord in whatever way He wills.

Some will say that all this sounds fine and dandy, but how can we be sure that we will be caught up to be with Jesus forever? John 10:14-16; “I am the Good Shepherd. I know My Own, and My Own know Me, (15) just as the Father knows Me, and I know the Father; and I lay down My life for the sheep. (16) And I have other sheep that are not of this fold. I must bring them also, and they will listen to My voice. So there will be one flock, One Shepherd.” The other sheep mentioned here includes every living soul on this earth. To be with Him, one must have received and accepted Jesus as their Savior, which is explained below.

All who call out to Jesus to forgive them and to be their Savior will be saved. (Acts 2:21; Romans 10:13) Once a person receives and accepts the gift Jesus gave for us, that person becomes a part of the precious “flock” that’s mentioned in John 10. He laid down His life at Calvary for all of mankind, and the provision that must be followed is simple. Accept the gift.

To many people, this is hard because they feel there has to be a lot more we must do to earn or purchase our place in Heaven. That is not the Jesus way to Salvation, as Ephesians 2:8-9 plainly states that it’s through the Grace of Jesus that we’re saved.

We can do no “special works” to gain His approval. Isaiah 64:6 plainly states that any works we try are as filthy rags to the Father. So, if all the pomp and circumstance is of no use, how can we be sure we’ve done what we must to be saved?

Romans 10:9-13; “because if you confess with your mouth that Jesus is Lord, and believe in your heart that God raised Him from the dead, you will be saved. (10) For with the heart one believes and is justified, and with the mouth one confesses and is saved. (11) For the scripture says everyone who believes in Him will not be put to shame. (12) For there is no distinction between Jew and Greek, for the same Lord is Lord of all, bestowing His riches on all who call on Him. (13) For everyone who calls on the name of the Lord will be saved.” (ESV)

The question has been asked if the “confess with your mouth” has to be in some evangelical church, or in front of a bunch of witnesses. The ABC’s are plain and simple – admit that we’re all sinners and confess this to Jesus; believe and have faith that He is the only way to the Father in Heaven (John 14:6); and call on Him to forgive us and to save us.

That’s it. There is nothing here that says who we need to be in the presence of except for Jesus. When one calls out to Him, there are already witnesses there. Luke 15:10; “Just so, I tell you there is joy before the angels of God over one sinner who repents.” Also, what about someone who cannot speak, are they eliminated because of this? Certainly Not!

Our Savior, that came to give His all for us, did so of His own free will. He chose to suffer and die in our place to have a means to remove our sins. Although we are totally unworthy of the sacrifice He made for us, there was no other way that the Father could accept. He demands perfection, and only the pure, sinless blood of our Jesus could qualify. All who have received and accepted Jesus as their Savior, are pure in the eyes of the Father. All who reject this free gift will end up a the great white throne of Revelation 20:11-15. There will be no forgiveness, no pardons, no reprieve there.

So for all who have Jesus, we proudly sing:

To God be the glory, great things He hath done. So loved He the world, that He gave us His son; who yielded His life, an atonement for sin; and opened the life gate that all may go in.

Oh perfect redemption, the purchase of blood. To every believer, the promise of God. The vilest offender who truly believes; that moment from Jesus a pardon receives.

God gave us the promise that whoever has His Son, has eternal life with Him. God cannot, nor would He ever lie. (Titus 1:2) The time is getting near for the trumpet and shout. It will be over in about a second, and shortly thereafter the tribulation will start. Make your reservation before the “taking up”. To wait could be the biggest error you may ever make. Today would not be too soon.