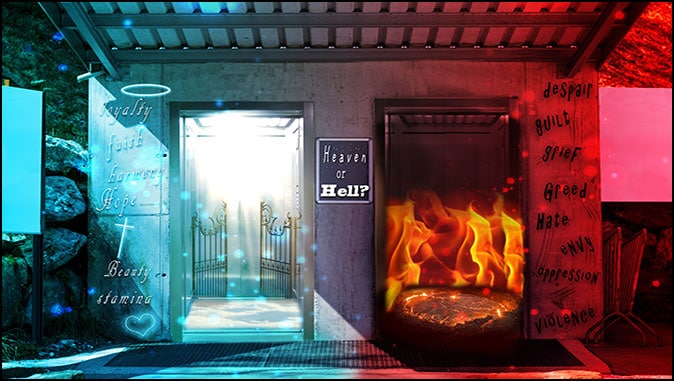 Only Two Paths
By Dennis Huebshman

Quick quiz; All who believe there’s many ways to Heaven; hell is not real; All religions worship the same God; Jesus is only one way of many; the Bible is not the true word of God but just a bunch of fables, raise your right hand. Now for those with their hands up, slap yourself! (all emphasis mine)

Let’s go to two verses that sum up how we can be assured of Heaven. First, John 14:6; “Jesus said to him (Thomas), I am the Way, the Truth, and the Life; no one comes to the Father except through Me.” Next Acts 4:12; “And there is Salvation in no one else, for there is no other name under Heaven given among men, by which we must be saved.”

What about those who believe in God, but not Jesus. John 3:18; “Whoever believes in Him is not condemned, but whoever does not believe is condemned already, because he has not believed in the name of the only Son of God.”

As for the Bible, we start with 2 Timothy 3:16; “All scripture is breathed out by God, and profitable for teaching, for reproof; for correction, and for training in righteousness.” Then 2 Peter 1:20-21; “knowing this first of all, that no prophecy of scriptures comes from someone’s own interpretation. (21) For no prophecy was ever produced by the will of man, but men spoke from God as they were carried along by the Holy Spirit.”

All true Bible translations are taken from scrolls that have been transcribed and handed down almost from the very beginning of earth’s history. The first 5 books known as the Pentateuch, were written by Moses. Just over the past couple decades, discoveries have been made in and around the Holy Land that proves that the existence of Old Testament people are real, including King David. The original dead sea scrolls found in late 1946 to early 1947 contain fragments from every book in the Old Testament except for the book of Esther. This does not mean Esther is false, but whatever story was recorded goes back to the days before Jesus walked on this earth.

To get a true translation, my recommendation would be to go to a trusted Christian Book Store, or a trusted website. Sadly, there are “bibles” today being produced that refer to Our Heavenly Father as “she”. Some are leaving out key components such as the “abominations” as if they suddenly are not a sin. Those who are publishing and promoting these false works will be taken care of at the Great White Throne (Revelation 20:11-15) My thought on this is there ought to be a bible printed in pencil, and sold with an eraser. Then, whatever people don’t like, they can just erase those parts. Just remember, those who participate in this will have their names “erased” from the Book of Life.

As for hell, Jesus spoke of it and why it exists in Matthew 25:41; “Then He will say to those on His left, depart from Me, you cursed, into the eternal fire prepared for the devil and his angels.”

His “angels” are mainly those who followed Lucifer when he rebelled against God because of his destructive self-pride, believing he should be equal with his Creator. He and his angels, or demons, have no pathway to forgiveness. They were already in the glory of being in the presence of the Father, and they turned away from Him. All humans from creation to Calvary that did not follow God’s will; and all from Calvary to the end of the Millennial reign of Jesus who refused to receive and accept Him as their Savior, will join satan and his angels in hell.

Some may ask why I repeat a bunch of verses in just about every message. There are several reasons. One, this may be the first time someone sees one of the messages the Father has given to me to publish I rely on the Holy Spirit to open their hearts to His word. My sincere hope is they will look further into the word the Father has provided.

Next, we learn by repetition. Sometimes it takes several tries before something sinks into my mind as being important. My ministry for the Lord started in church pulpits, however, today it is in the messages He gives me.

I have truly been blessed by two administrators for sites that are fortunate enough to be viewed by people all over the world. I receive emails from many countries besides the U.S. and Canada, and I give God all the accolades for this “miracle”. The sites are raptureforums.com (articles); and raptureready.com. I especially look forward to giving the site administrators a giant hug, right after I am able to stand after falling at the feet of My Savior when we are Home.

Finally, my goal is to have people be assured of their eternal Salvation by knowing the simple ABC’s of being saved. There are “religions” that proclaim that their followers must do works or perform certain special “rituals” or pay so much money to earn and buy their form of Salvation. Some don’t even teach about the coming Rapture, as if it doesn’t exist. Please remember who Jesus had the most problems with – the so-called religious leaders of His days on this earth.

The simplest answer to how we are saved is Ephesians 2:8-9; “For by grace you have been saved through faith. And this is not your own doing; it is the gift of God, (9) not a result of works, so that no one may boast.”

As for the two paths, Jesus references them in Matthew 7:13-14. I’ve given this numerous times, but it’s worth repeating; “Enter by the narrow gate. For the gate is wide, and the way is easy that leads to destruction; and those who enter by it are many. (14) For the gate is narrow, and the way is hard that leads to life, and those who find it are few.”

The path to “life” refers to the way to Heaven. The path to “destruction” refers to the way to hell. There are no other options that we are given. The “hard” part about the path leading to life is just what Romans 10:9 says; “because if you confess with your mouth that Jesus is Lord, and believe in your heart that God raised Him from the dead, you will be saved.” Satan is right there telling us this is just a myth, and couldn’t possibly be believed by “someone with your intellect”. As stated, more will believe satan’s lies of what this world has to offer, than to truly believe the Word of The Lord. That would be the “easy” way, and it leads all who follow it to the lake of fire.

God’s word is true, and He cannot lie. (Titus 1:2) If we wish to chose that our eternal soul will be with Him forever, we need to reject what the false prophets and antichrists are proclaiming, and once and for all tell God we want to chose life through His Son, Jesus the Christ. Go to the Father in prayer and ask that He would give you that ability to understand what He is offering. He will in no way turn you away.

Continuing to Romans 10:10-13; “For with the heart one believes and is justified, and with the mouth, one confesses and is saved. (11) For the scripture says everyone who believes in Him will not be put to shame. (12) For there is no distinction between Jew and Greek; for the same Lord is Lord of all, bestowing His riches on all who call on Him. (13)For everyone who calls on the name of the Lord will be saved.”

ABC – admit (confess) you’re a sinner, as all of us are (Romans 3:23); believe and have faith Jesus dies as the only perfect sacrifice for our sins, and that God raised Him from the dead to conquer sin and death once and for all; call on Jesus to be your Savior, and you will be saved.

By the “Grace” of Jesus we are saved; by the “Mercy” of the Father we are forgiven. Through Jesus, God forgets our sins as if they were as far as the east is from the west. (Psalm 103:12)

There is a “however” in all of this. If we refuse to receive and accept the gift that Jesus gave us, every sin we will ever commit on this earth will be held against us and revealed at the Great White Throne. It will show everyone there why they are in that long line, and the reason for being condemned to hell forever will be plain to see.

Your choice. God will turn no one away who has His Son as their Savior. That’s a promise that is more valuable than all the treasures this earth holds. There are no special speeches or rituals you must do. One simple example would be; “My Jesus, I know that without You, I am lost. Please forgive me and come into my heart and be my Savior forever.” If you call out to Him such as this, and truly mean it, you will have established a home with Him forever. And as such, may I say; “Welcome to the Family!”

We don’t know the day or hour He will be calling all His flock up to meet Him in the air, but it won’t matter if you have already called on Him. Please don’t delay, but call today – right now!