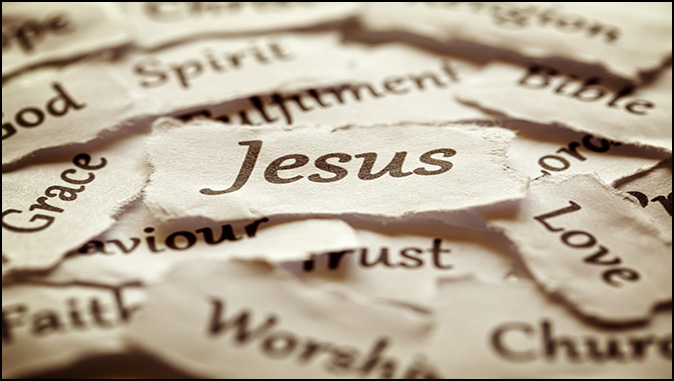 Only Jesus
By Dennis Huebshman

“My Jesus I love Thee, I know thou are mine.” “Jesus, Jesus, Jesus; there’s just something about that name. Master, Savior, Jesus; like the fragrance after a rain.” “All my hope is in Jesus; thank God my yesterday’s gone; all my sins are forgiven; I’ve been washed in the blood.” “In Christ alone, my hope is found; He is my light, my strength, my song.” “Jesus paid it all; all to Him I owe; sin had left a crimson stain; He washed it white as snow.” “What a friend we have in Jesus; all our sins and griefs to bear.” (ESV – all emphasis mine)

This list could go on and on and would cover numerous generations of authors and praise and worship songs from many writers and performers. For the Christians, these hymns put a melody in our minds, and a peace and true hope in our hearts. For the unbelievers, this is nothing but foolishness (1 Corinthians 1:18). Today, the division is more pronounced, and definite lines have been drawn.

In some countries today, anyone who professes a faith in our Lord and Savior can be subject to martyrdom. In the not too distant future, this will be worldwide. Even in America today, the dividing lines are becoming more and more prevalent. Activities that used to be kept “in the closet”, have come out in the open as being the “new normal”. The increasing satanic influence is obvious to those who are following Jesus.

Some evangelical churches that were previously Biblical in their teachings, have “new age” pastors who are actually false prophets that we were warned about in the Bible. Sin is not addressed in their messages, and in some denominations, all forms of sexual behavior are being given as perfectly normal for today’s culture. Messages are meant to “tickle ears” with rhythmic music arrangements that have nothing to do with worshiping the Savior.

This is not unexpected by our Father, His Son Jesus and the Holy Spirit. Paul lists numerous actions and attitudes that will be present at the end of this age. (2 Timothy 3:1-5) Jesus said there would be more people on the broad pathway to destruction than on the straight and narrow path to eternal life. (Matthew 7:13-14)

Peter told about the “scoffers” in the last days in 2 Peter 3, and in 1 John chapters 2 through 5, the Apostle tells us about false prophets and antichrists that will be more and more out in the open. John stated they were already present during his time, and he gave numerous examples of what we are to watch for.

When someone takes note of all the increased evil and hate that is here today, we can honestly say the “birthing pains” have more than just started. Jesus told us that when all this “starts to happen”, He will soon be close to coming back for His flock. (Luke 21:28)

For all who put their faith and trust in this world, there is a terrible eternity waiting for them. Some are so far lost and satan possessed that God will be giving them a “deluding influence”, so they will continue to believe what is false. (2 Thessalonians 2:11) All who would repent and seek the forgiveness of the Savior, will change their eternal address. This includes every living soul on this earth as long as they do so before taking their last breath here. After that, whatever their status was – saved or lost – is set for them for all eternity.

There is only one way to eternal life. John 14:6; “Jesus said to him, I am the Way, the Truth and the Life; no one comes to the Father except through Me.” Only Jesus!

No one else left a Holy Kingdom as part of the Heavenly Triune Godhead, and became flesh so that we could have the perfect advocate. Only Jesus!

No one else ever lived a sinless perfect life as a human so that their sacrifice could be accepted by the Heavenly Father. Only Jesus!

For the triumph; no one else was raised from the dead and conquered sin and death for all who would call on Him. Only Jesus!

With this in mind, please consider a song by Casting Crowns that was released in 2018 titled, “Only Jesus”.

Ref.) And I don’t want to leave a legacy; I don’t care if they remember me. Only Jesus; and I, I’ve got one life to live, I’ll let every second point to Him; Only Jesus.

2.) All the kingdoms built; all the trophies won; will crumble into dust when it’s said and done. Cause all that really mattered, did I live the truth to the ones I loved? Was my life the proof that there is only One, whose name will last forever?

When all is said and done, how will you be able to answer the Father when He asks; “What did you do about My Son?” He won’t be asking about any works you may have done. He won’t be checking how many man-made religious rules you followed. His question, plain and simple, is did you receive and accept the gift My Son gave so that you could be with Me forever? Nothing we could ever do could earn or buy even one second in Heaven. Our deeds are as filthy rags to the Father (Isaiah 64:6)

Jesus is one-third of the Godhead, and with the Father and Holy Spirit, has always existed. John 1:1-4 plainly states this, and as verse (3) states; “All things were made through Him, and without Him was not anything made that was made.”

Our God is all knowing (Omniscient), all powerful (Omnipotent), everywhere at once (Omnipresent). When humans sinned in the Garden of Eden, our Father was not taken by surprise. He knew that eventually He would have to provide the “payment” for the sins of His created beings, and the Old Testament is a record of all that was done prior to our Savior becoming fully human to be that payment. Even though Jesus was fully human, He still was fully God. He willingly gave Himself as the only pure blood sacrifice that would be able to save us. (John 10:18)

God allowed His Son to be beaten and nailed to a cross in our stead. Jesus died, He did not “swoon” and survive the crucifixion as some would have you believe. He was buried and His body remained in that tomb until the Father rose Him up from the dead that third day. When Jesus told the thief that he would be with Him that day, when The Savior died, His spirit went to the Father, just as ours does when a believer dies. He came forth out of the grave victorious over sin and death, and has offered the gift of eternal life to all who will call on Him to forgive them and be their eternal Savior.

This does not mean for any particular “religion”, but for every human that is on this earth who will truly accept Him. As Peter said in Acts 4:12; “And there is Salvation in no one else, for there is no other name given under Heaven among men by which we must be saved.”

Only Jesus! No one else. Is it any wonder that this would be the only requirement our Father insists on? If someone worships a deity other than Jesus, God will allow them to do so, but they will end up at the Revelation 20:11-15 White Throne Judgment to receive their eternal condemnation.

Only Jesus – “Spread the tidings all around, Jesus Saves; Jesus Saves.” God will force no one, but will accept all who call on His Son to be saved. (Romans 10:13)

This world as we know it is rapidly coming to a close. Before the next phase begins, Jesus will call up all of His true followers to meet him in the clouds to keep us from the coming Tribulation. It’s completely your choice to make – at Home with Jesus; or here on earth to be ruled by satan’s antichrist.

He is waiting for your call, but it won’t be for much longer. Today would be the absolute best time to make your decision in favor of the Gentle Shepherd. Tomorrow could be “a day late, and a dollar short” as the old saying goes. Only money isn’t the issue, your eternal soul is at stake.

Shalom Aleclem – Peace Be With You!