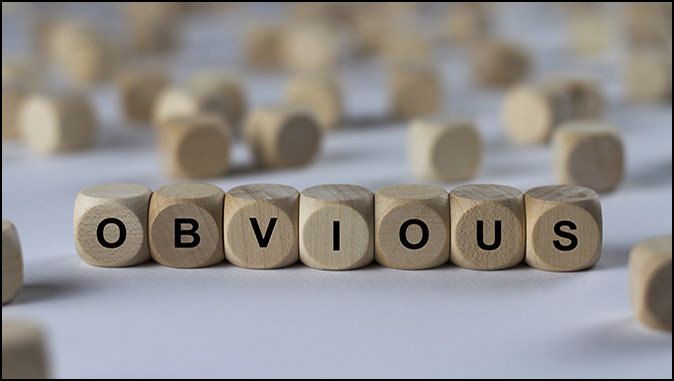 Now It Is Obvious Why
By Dennis Huebshman

Once again, 2 Timothy 3:1-5; “But understand this, that in the last days, there will come times of difficulty. (2) For people will be lovers of self, lovers of money, proud, arrogant, abusive, disobedient to their parents, ungrateful, unholy, (3) heartless, unappeasable, slanderous, without self-control, brutal, not loving good, (4) treacherous, reckless, swollen with conceit, lovers of pleasure rather than lovers of God, (5) having the appearance of godliness, but denying its power. Avoid such people.” (ESV – all emphasis mine)

Going from cover to cover in the Bible, we see many countries mentioned as being in the end time activities. However, the once most powerful nation on earth, America, is not specifically mentioned. One would think that this country would be listed because of all it has accomplished up to now. The possibility here could be found in Genesis 12:3; “I will bless those who bless you, and him who dishonors you, I will curse; and in you all the families of the earth shall be blessed.”

When Israel once again declared itself as a sovereign nation after almost 2000 years on May 14, 1948, the United States was the first country to recognize their sovereignty and right to exist. Through the years since then, we have been an ally with them until the past decade or so. Certain administrations came to believe that we somehow have control over how Israel should run its own country. By trying to force Israel to give up land that was promised to them by our Heavenly Father, this somehow seems as dishonoring their right to exist as an independent nation. It would be like Belgium telling the United States that we need to redo all our state lines to meet what they would like.

Through multiple circumstances over the past couple years, our country has gone from being respected as a powerful nation, to being ridiculed by forces that really don’t like us. Any fear of our “power and might” has disappeared. It is becoming obvious that the prophecy of Israel standing alone against all forces that will come against them is about to be fulfilled. (Zechariah 12:2-3; 9) The Ezekiel 38 coalition has formed for the first time ever, and in the not-too-distant future will attack Israel for their plentiful resources.

All the changes taking place, which are labeled as abominations by our Father, are here and out in the open. Going to 2 Timothy 3:12-13; “Indeed, all who desire to live a Godly life in Christ Jesus will be persecuted, (13) while evil people and impostors will go from bad to worse, deceiving and being deceived.”

One example of the deception is an event that took place in Tyler, Texas on October 29 on the town square. The satanic temple of Dallas and Ft. Worth held a “pagan-pride” service that advertised it as an “unbaptism” event. Churches of satan are opening up around the country and are not having any real issues in doing so. However, just about anything relating to Christianity is being challenged. Some are going all the way to the Supreme Court, and the rulings are disturbing and disappointing.

All the alphabet groups, and gender-identity folks are basically operating in the open and are unchallenged world-wide. In some places, not referring to a person by their “chosen gender” has been made a crime with the possibility of being incarcerated. There’s even a group that are now saying they’re not really humans, but are describing themselves as animals such as “trans-cats”.

And people are surprised that our nation is steadily sinking; can it really get much more obvious? Many are declaring they do not believe in Jesus or God, and describe the Bible as a compilation of myths. They don’t accept 2 Timothy 3:16-17 as truth. “All scripture is breathed out by God, and is profitable for teaching, for reproof, for correction and for training in righteousness, (17) that the man of God may be complete, equipped for every good work.”

Going from Paul’s word on this to the Apostle Peter, we read in 2 Peter 1:20-21; “knowing this first of all, that no prophecy of scripture comes form someone’s own interpretation. (21) For no prophecy was ever produced by the will of man, but men spoke from God as they were carried along by the Holy Spirit.”

The ultimate evil antichrist has not yet appeared. However, false prophets and antichrists are increasing in number and influence. Our Savior knew that there would be more on the road to destruction, than the straight and narrow path to eternal life. (Matthew 7:13-14)

We’re told in 2 Thessalonians 2:7 that the lawless one is restrained until the “Restrainer” is taken out of the way. Many that are tied to this world, which means they are tied to satan, will receive a strong delusion so they will believe what is false. (2 Thessalonians 2:11-12)

The Father wants no one to fail and go into eternal punishment, however, He is aware that some have already fully accepted satan’s world, and will allow them to make this foolish choice.

For all who have received and accepted Jesus, the times here are about to get more difficult for us. However, before the evil one and his false prophet appears to produce the worst 7-year period of time this world will ever see, we will be removed to be kept from that tribulation/wrath as promised in 1 Thessalonians 1:10; 1 Thessalonians 5:9-10 and Revelation 3:10.

It is our daily prayer that all our loved ones, friends, and even those who don’t really like us will seek out and call on Jesus for their Salvation before it’s too late. For those who already have, we ask the Father to give us the strength and courage to hold on until we hear the Trumpet of God, and the call from the archangel. This is when we will rise up to meet our Savior in the air, and be with Him forever.

No special rituals, no special works nor any donations are required, or are even accepted. Just admit you are a sinner as we all are (Romans 3:23); have faith and believe that Jesus is a part of the Holy Trinity that came to earth as a human to provide a sacrifice no one here could ever do (John 14:6); and finally call on Him to forgive you and be your Savior forever. That’s it.

There are only two eternal addresses; Heaven or hell. False prophets will say there’s many ways to heaven, and all religions worship the same god. Truthfully, God and His Son are all about establishing a relationship, not any religion.

Today would not be too early to get your reservation for the Rapture, as we are not given the day or hour that our Savior will come for His flock. He will force no one to accept Him, but will accept all who truly will.

It is the most important decision you will ever make. Any delay could just put a person into the tribulation. Jesus is waiting for your call.

Ahavah B’Shem Yeshua! (Love in the name of Jesus)