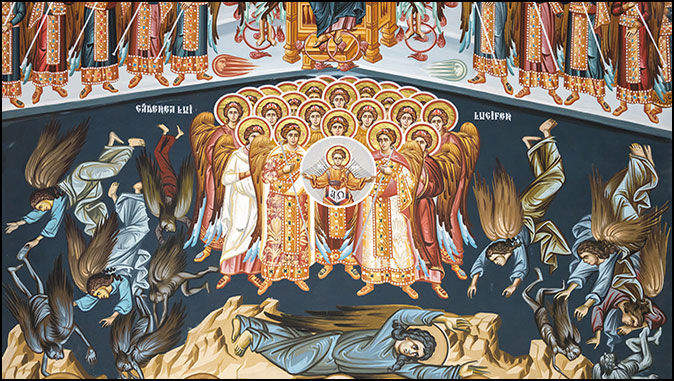 Genesis 1:1; “In the beginning, God created the heavens and the earth.” This is about as basic and straightforward as it gets. God has ultimate control over everything that pertains to our lives, right down to the complete makeup of each and every thing that is on this planet. For people to think He’s just some ancient being that sits on a throne all day watching angels play, they have a concept that is totally wrong. All that there is in Heaven and on earth was created by Him. (ESV – all emphasis mine)

There was an archangel created by God that was possibly the most beautiful angel ever. Instead of glorifying the Father and giving Him all praise and glory, Lucifer believed he should be equal to the creator, and have a special throne just for himself. In essence, he mocked God.

Isaiah 14:12-14; “How you are fallen from Heaven O daystar, son of dawn! How you are cut down to the ground; you who laid the nations low. (13) You said in your heart, ‘I will ascend to Heaven. Above the stars of God, I will set my throne on high; I will sit on the Mount of Assembly in the far reaches of the north; (14) I will ascend above the heights of the clouds; I will make myself like the Most High’.”

Ezekiel 28: 13-17; “You were in Eden, the Garden of God; every precious stone was your covering; sardius, topaz and diamond; beryl, onyx and jasper; sapphire, emerald and carbuncle; and crafted in gold were your settings and your engravings. On the day that you were created, they were prepared. (14) You were an anointed guardian cherub. I placed you; you were on the Holy Mountain of God; in the midst of the stones of fire you walked. (15) You were blameless in your ways from the day you were created, till unrighteousness was found in you. (16) In the abundance of your trade, you were filled with violence in your midst, and you sinned; so I cast you as a profane thing from the Mountain of God, and I destroyed you, O guardian cherub, from the midst of the stones of fire. (17) Your heart was proud because of your beauty; you corrupted your wisdom for the sake of your splendor. I cast you to the ground; I exposed you before kings to feast their eyes on you.” Is it any wonder why God hates destructive self-pride?

We hear of Michael and Gabriel throughout the Bible, but both of them are fully dedicated in their service to the Father. Jesus is God (John 10:30), and His dedication gave all of us unworthy humans a pathway to Heaven.

The time will come when there will be a battle in Heaven, and satan will finally be cast out as given in Revelation 12:7-9; “Now war arose in Heaven; Michael and his angels fighting against the dragon. And the dragon and his angels fought back; (8) but he was defeated, and there was no longer any place for them in Heaven. (9) And the great dragon was thrown down, that ancient serpent, who is called the devil and satan the deceiver of the whole world – he was thrown down to the earth, and his angels were thrown down with him.” This will be during the great tribulation era, just before Jesus returns for His 1000 year reign on earth. The final phase will be satan and all his fallen angels will be cast into the lake of fire forever, that was made specifically for them. (Matthew 25:41; Revelation 20:10-15)

There is no pathway for satan or his demons to gain forgiveness. They had been in the splendor of Heaven, yet they sinned against their Creator. Apparently, God allows a certain amount of free-will choice, and about a third of the angelic host chose to follow satan. (Revelation 12:4) Once they made their choice, the Father showed them what their action had brought on themselves. Galatians 6:7-8; “Do not be deceived; God is not mocked; for whatever one sows, that will he also reap. (8) For the one who sows to his own flesh, will from the flesh reap corruption; but the one who sows from the Spirit, will from the Spirit reap eternal life.”

All the people today that are falling under the influence of the devil and his demons are making their own reservations at the Great White Throne Judgment. Our Father is a God of love, not a tyrant. We are given everything we need to be able to make a choice as to where we will spend eternity. God wishes that everyone would call out to receive and accept His Son’s free-gift (2 Peter 3:9), but in no way will He ever force anyone to do so. His true words are there for us to study, but first one has to believe that the Bible is the true inerrant word of God.

Those who have received and accepted Jesus, and are a part of His precious flock, are His forever. (John 10) While in human form, we will sin until that time when we receive our immortal, forever bodies. God is faithful and just to forgive us when we confess that we have sinned, but still may cause us to be disciplined. (1 John 1:8-10; Hebrews 12:5-8; Proverbs 3:11-12) As humans, Jesus died for us, and we have His promise of Heaven when we are with Him.

There are places in the world, and even some places in America today, where there have been demonstrations that are purely anti-God. In one west coast demonstration, there were photos of signs being held up stating that God should get out of their area. Quick question, has our entire west coast experienced anything unusual lately? How about massive wild fires in some areas; extreme record-setting heat in others; drought in some, and flooding in others? Pestilence is definitely on the rise.

This is not only on the west coast, but other places as well. Jesus spoke of a turning away from Him in the days before the end of this age. It is estimated in some reports that the total number of true believers in America is somewhere between 10% and 12% of our total population. In other countries, it is even less. The number of Messianic Jews, the ones who believe Jesus is their Messiah, is between 1% and 2% worldwide.

Strangely, the places that are seeing an increase of people accepting Jesus, are those where Christians are openly being persecuted even to martyrdom. Iran, Red China and some places in Africa have been named among them.

Satanic groups are openly declaring that Christians are “haters”, because we do not accept their lifestyles. It is not an issue that we love everyone for their eternal soul, but we do not have to like and accept what they do, or even to like them for that matter. Our Jesus loved everyone on earth, but there were those that He openly disliked, and told them what they were doing wrong. The Pharisees were at the top of that list

One of our most important basic freedoms in America is freedom OF religion – not freedom FROM religion, as some groups would like us to believe. This was drafted into our Constitution so that people would be free to worship, or not, in whatever way they chose, as long as their rituals didn’t harm others. Human sacrifice is definitely out

Today, the attitudes that are being influenced by satan is non-tolerance of anything to do with Jesus. Through all the alphabet groups, people are dedicating their eternity to spend it with the devil in hell. Yet, they are willingly choosing him over Jesus, and are open about it. Once they have taken their last breath here, their eternity is set.

Prior to that, anyone who will repent and call out to Jesus to be their Savior, and forgive them, will be forgiven. Romans 10:9-13 gives the steps. Although we do not have a record of what the thief on the cross’ lifestyle was, he asked Jesus to “remember” him. Jesus told him that he would be in paradise with the Savior that very day. In his most agonizing moments, our Savior saw fit to forgive this man, and let him know he had a home in Heaven. That is a love that cannot be matched. That is how much Our Savior loves each of us.

Your choice – Your eternity. There are no special rituals or works or fees to have Jesus as your Savior. Ephesians 2:8-9 is specific that it’s through grace we are saved, not by works.

For the false prophets that are telling you there’s many ways to heaven, or all religions worship the same God; please read John 14:6; Acts 4:12; Romans 8:1; John 3:18 and 1 John 5:12. These are quite specific and to the point. God’s word is sincere and true (Titus 1:2), and He will not be mocked. Open your mind and your heart and call out today It will be the absolute best decision and action that you will ever have taken

Pass It On By Dennis Huebshman As a kid many years ago, we used to…