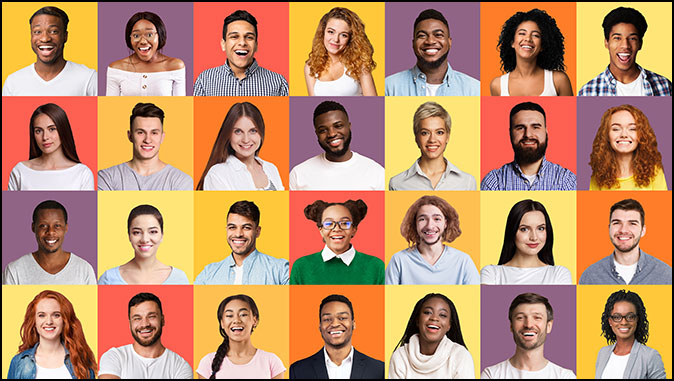 Looking For Faces
By Dennis Huebshman

There are times when we may feel discouraged because we don’t see any results from our trying to share the word of the Lord. A good portion of this is due to a fallen arch angel – Lucifer. Prior to this world even being created, he decided that he should be equal with his Creator, and be worshiped as such. (Isaiah 14:12-15) There were even a group of the heavenly host that agreed with him, and they set up their own forever condemnation. Like humans, God allowed a certain amount of free will. Unlike humans, there is no repentance and forgiveness for satan and his demon angels. Matthew 25:41 states that hell was made for them. (all emphasis mine)

The devil has been a major stumbling block for the human race, starting in the Garden of Eden, and continuing to the present time. God has allowed him certain latitude, but a time limit has been set which is rapidly coming to a close. Satan knows his time is getting shorter, and that God does not deviate from His divine word. Satanic activity is on an increased pace that is more in the open than ever before.

God has promised that all who receive and accept His Son, will have eternal life in Heaven. All who don’t, will exist forever in the Lake of Fire with satan and his fallen followers. (Revelation 20:11-15) At the resurrection of our Savior from His “human” death, satan knew his defeat was sealed. However, he’s just arrogant enough to want to pull as many souls away from Jesus as possible. Sadly, his tactics work only too well.

From Jesus’ own words, He knew more would accept and follow the ways of this world, than would receive and accept His wonderful gift of eternal life. (Matthew 7:13-14) However, He fulfilled His promise that all who would become a part of His flock would never be separated from Him. (John 10:11-18) We may face trials and tribulations here, but Jesus overcame them for us. (John 16:33) No organized religion saves anyone, and some have even turned away from the true and pure word of the Lord. Just because something is said in “church”, that doesn’t make it so. The only way to be correct is to follow God’s word, not man’s. (Acts 4:19-20) We were warned about an increase in false prophets at the end of this age, and the evidence of this today is overwhelming.

Some of God’s messengers have “down moments” because we sometimes don’t see any positive results from our efforts. We forget 1 Kings 19:14-18, where Elijah went into hiding because Jezebel was out to kill him, and he thought he was totally alone. God informed Elijah that he was not alone, but there were actually 7,000 others that had not bowed to her false god. Also, we forget Isaiah 55:11 that tells us God’s word will not be returned empty. Just because we may not personally see those who have accepted Jesus because of our efforts, God sees each and every one worldwide.

This is something I shared with a very dear lady with a wonderful Christian website recently. I mentioned a song that covered this topic that was written by Rodney Griffin of the Southern Gospel Group Greater Vision. It was written a number of years ago, but it still rings true. It is called “Faces”, and puts into perspective that we are not to give up our efforts to get the true word of the Father out to the world. The time is coming very soon, that to just speak the name of Jesus in a positive manner will most likely lead to martyrdom. Please consider the words of this wonderful song.

(1) I dreamed my life was done; I stood before God’s Son. It was time to see what my reward would be. With love He reviewed my life; to count what was done for Christ; for that is what will last eternally.

See, I’d done my best to share; that Jesus really cares; and He would save if they just believe. Oh, but seldom did harvest come; and so few did I see won; until the Lord said, “turn around and see.”

(ref) Then He showed me the faces of the ones, who’d come because of me; so many faces that my life had led to Calvary. All those years I thought nobody saw, as I labored in lowly places; that’s when Jesus smiled and showed me all the faces.

(2) He said though you did not see the yield; you were faithful to plow the field. At other times you helped Me plant the seed. No matter how small the task, you did just as I asked; and thanks to you, these souls have been set free. (ref)

(3) And for those years, you thought nobody saw, as you labored in lowly places; one day He’ll smile and show you all the faces…the faces…you’ll see their faces.

We do not share God’s word to earn or buy a place in Heaven. We do so because we truly believe Jesus came to this earth to give us something we could never ever afford on our own – immortal, imperishable life in Heaven with the One who died for us, forever in paradise. We want to share the Gospel (Good News) with all who will receive it. That’s the real “gift”, that never stops giving.

No matter what race a person is; where they live in this world; or what they have done in the past; Our Lord and Savior is ready to accept and forgive all who will truly call on Him to be saved. See Joel 2:32; Acts 2:21 and Romans 10:9-13 for just a few examples of this.

The entire Bible is God’s “Love Letter” to all of us, and gives valuable information about selecting our eternity. There are only two paths to select from – Heaven or Hell. One leads to eternal life with Jesus and all the saints and Heavenly host; the other leads to the Lake of Fire, in pure misery forever. Many will say the Bible is just a book of fiction and fairy tale stories, as that’s one of satan’s biggest lies. To not believe the word of God would be the biggest mistake anyone could ever make.

The Father loves us so much that He will not force anyone to come to Him. It must be done willingly, just as Jesus willingly went to the Cross for us. (John 10:18) It is up to each and every individual to choose their eternal location. God does not “send” anyone to hell, but he will honor the decision for all who choose this. One more time; all who call on the name of the Lord will be saved. That’s a promise, and God does not lie. (Titus 1:2)

For those who actually believe they have been bad beyond salvation, Jesus’ blood covered all sins of everyone who will have Him as their Savior. The unforgivable sin is to not have received and accepted Jesus when one takes their last breath here. The second one will be during the Tribulation/Wrath for all who willingly take the mark of the beast. The sins have been paid for in full, but to receive the gift, one has to open it.

Right now would not be too early to ask Jesus to forgive you, and be your Savior forever. He will be calling for all His flock soon (Rapture), and it would be a horrible mistake to miss it. Please call on Him, and you can rest assured your eternity will be wonderful.