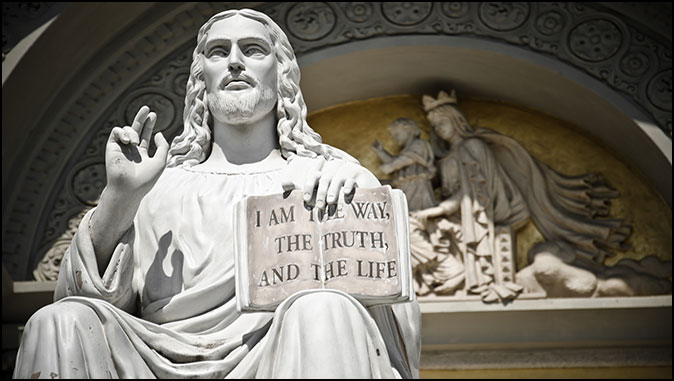 Know Jesus vs No Jesus
By Dennis Huebshman

John 20:24-29; “Now Thomas, one of the twelve called the twin, was not with them when Jesus came; (25) so the other disciples told him ‘We have seen the Lord!’. But he said to them, ‘Unless I see in His hands the mark of the nails, and place my finger into the mark of the nails, and place my hand into His side, I will never believe’. (26) Eight days later, His disciples were inside again, and Thomas was with them. Although the door was locked, Jesus came and stood among them and said, ‘Peace be with you’. (27) Then, He said to Thomas, ‘Put your finger here, and see My hands; and put your hand, and place it in My side. Do not disbelieve, but believe!’ (28) Thomas answered Him, ‘My Lord, and My God!’. (29) Jesus said to Him, ‘Have you believed because you have seen Me? Blessed are those who have not yet seen and yet have believed’.” (ESV – all emphasis mine)

And this is the main issue today. All who have received and accepted Jesus as their Savior, and believe that He truly exists, that what the Bible says is totally true, and that He did die on a cruel cross for our sins and was raised from the dead by the Father, and all who call out for Him to save them, they will be saved. His death was to conquer sin and death for us unworthy humans once and for all. He ascended back to the Father, and will come again soon to take us out of the path of the wrath.

For all who disbelieve, or who believe He was just another prophet and not really God, they are subject to missing the Rapture and entering the tribulation period when it actually begins. That time will be worse than anything this earth has ever experienced. The New World Order today is setting the stage for the arrival of the evil leader – the antichrist – and all activity is fulfilling prophecy by the hour. Once Jesus removes His flock from here, it will be at least seven years before He returns to shut down the wrath, and to rule and reign from Jerusalem for one thousand years.

There are numerous verses in the Bible that tell us exactly who Jesus is, and why it’s critical to believe in Him. We are the ones who have not had the privilege of seeing Him in person as His disciples did, yet, we are the ones who truly believe God’s word. Many people view the Bible as just stories and legends from the ancient past, and see it mostly as a work of fiction. For a believer, it’s our lifeline!

After calling out to the Savior to forgive me and add me to His flock about 35 years ago, there were passages in the Bible that opened up for me as I read it completely for the first time. Before that time, I had never read anything in depth from it. As I began to go cover to cover, I asked the Father to have the Holy Spirit open my heart and mind to receive His truth.

One verse covered what I needed most of all, and has become my “life verse”. John 14:6; “And Jesus said to him (Philip), I am the Way, the Truth and the Life; no one comes to the Father except through Me.” This totally dispelled the “many ways to heaven” garbage that false prophets are putting out today.

How about John 10:30; “I and the Father are One.” This corrects the statement that Jesus never claimed to be God.

Then of course, John 3:16-18; “For God so loved the world that He gave His only Son, that whoever believes in Him should not perish, but have eternal life. (17) for God did not send His Son into the world to condemn the world; but in order that the world might be saved though Him.” And then, the qualifying verse; (18) “Whoever believes in Him is not condemned, but whoever does not believe is condemned already; because he has not believed in the only Son of God.” This verse is repeated almost word for word in 1 John 5:10-12.

John 10 is a chapter that is a wealth of information of just how important we are to the Savior, and why He was willing to sacrifice Himself for us. By “us”, many have believed that Jesus only came to save the Jewish people, but verse 16 makes it clear His sacrifice was for everyone who would receive and accept Him as their Savior. That would include every human in the world today.

In John 17, Jesus prays for His disciples as He knows His time here was just about finished. While He specifically prayed to the Father mostly about them, He again included all who would believe in Him through their word. That word has been passed down to us, and therefore we are included in His plea.

One point here, some organized evangelical churches are saying that the Jews have been replaced by the church. This is absolutely false. God never goes back on a covenant, and His promise to Abraham still stands today. This is not to say He won’t discipline His chosen, and this will be done throughout the Tribulation/Wrath. Today, only about 1% – 2% of the total population of the Jewish people worldwide are Messianic – believe Jesus is their true Messiah. By the end of the tribulation period, 100% will believe this.

Going to Romans 10:9-13, we’re given the steps to Salvation that all must follow; Jew or Gentile. First, ADMIT (confess) we all are sinners in need of a Savior. Second, BELIEVE that Jesus is that Savior, and that He died once for all who would receive and accept His gift given at Calvary, and that God did raise Him from the dead. Jesus was the only human to ever live a perfect sinless life here so that His blood would be pure as the Father demands. Finally, all who CALL on the name of the Lord will be saved.

Prior to Calvary, people had to follow God’s will in order to have an eternal home with Him. From Calvary forward, all must have Jesus as their Savior to have eternity in Heaven. All before Calvary that were out of God’s will, and all who reject the Savior from Calvary to the end of this earth will be assigned a place in the Lake of Fire at the White Throne Judgment of Revelation 20:11-15.

Knowing Jesus and receiving and accepting His precious gift means eternal life with Him, with sins never more remembered. No Jesus in your life means His blood does not cover the sins of an unbeliever, and their eternity will be with Satan, and every sin they ever committed, large or small, will be held against them.

Jesus knew while He was on this earth that more would reject Him than receive Him. This is covered by the two pathways in Matthew 7:13-14. However, even so, He willingly went to the cross for all who would be saved. (John10:18)

The world today is just as Jesus and the others said it would be just before this age comes to an end. No one knows the exact day or hour that the “twinkling of an eye” will take place, but we are very close to that event. All the signs started just a few years ago, and Jesus advised that would mean He’s coming soon. (Luke 21:28)

Today would not be too early to call on Jesus and change your eternal life from condemnation to Salvation. Know Jesus = Heaven. No Jesus = Hell. This is totally each individual’s choice Personally, my wife and I made a Joshua 24:15 decision that we will serve the Lord.

Hope to see you at Home! Maranatha!

Only Jesus By Dennis Huebshman “My Jesus I love Thee, I know thou are mine.”…

A Glorious Day By Dennis Huebshman When the word “religion” is mentioned, countless thoughts come…

There Will Be A Day

There Will Be A Day By Dennis Huebshman From Matthew 24:6a-8; “And you will hear…

One Pair Of Hands

One Pair Of Hands By Dennis Huebshman As time passes, more and more end time…

I Was Blind But Now I See

I Was Blind But Now I See By Dennis Huebshman Sometimes, people who are without…