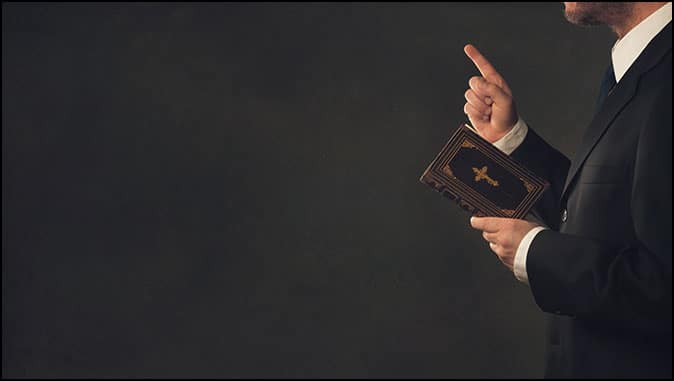 In 2 Timothy 4:1-5, Paul was in his last days before being martyred, and he gave Timothy some very specific instructions. “I charge you, in the presence of God and of Christ Jesus, who is to judge the living and the dead, and by His appearing and His Kingdom; (2) preach the word; be ready in season and out of season; reprove, rebuke, and exhort with complete patience and teaching. (3) For the time is coming when people will not endure sound teaching, but having itching ears, they will accumulate for themselves, teachers to suit their own passions; (4) and will turn away from listening to the truth, and wander off into myths. (5) As for you, always be sober-minded, endure suffering, do the work of an evangelist, fulfill your ministry.” Paul described today’s attitudes as if he were here this very moment. (any emphasis mine)

In 2 Timothy 4:8, Paul tells of a reward that all true believers will receive. “Henceforth, there is laid up for me the “Crown of Righteousness”, which the Lord, the Righteous Judge, will award me on that day; and not only me, but also all who have loved His appearing.”

In 2 Timothy 4:2, Paul says to preach “with complete patience and teaching”. This goes along with 1 Peter 5:2-4; “shepherd the flock of God that is among you, exercising oversight, not under compulsion (by force), but willingly as God will have you; not for shameful gain, but eagerly; (3) not domineering, over those in your charge, but being examples to the flock. (4) And when the Chief Shepherd appears, you will receive the unfading “Crown of Glory.”

Paul talks about those who “will not endure sound teaching, but having “itching ears”, they will accumulate for themselves, teachers to suit their own passions.” (2 Timothy 4:3) This is one reason that myself and others are warning about today’s so-called evangelical organized churches. There are a significant number who give “ear tickling” messages to soothe the “itching ears”. The membership follows eloquent preachers who give wonderful encouraging messages, yet messages that are unbiblical. John tells us in 1 John chapters 2 through 5 about the false prophets and antichrists that were already in action in his day (around 90-95 A.D.). We’re told by John, Peter, Paul, James, Jesus and others that this would increase abundantly near the end of this age. All one has to do is watch the news, and see all the evil that is coming out; and also we are witnessing the hate toward anything that is Christian.

For anyone who does not take this seriously, and say everything is the same as it’s always been (2 Peter 3:4); there are churches that are now saying that everything pertaining to the LGBT and all the other letters, are all of sudden acceptable to God. One word here – NOT! Remember, Jesus is God (John 10:30), and in Hebrews 13:8 we read, “Jesus Christ is the same yesterday and today and forever.” What God said are abominations in the Bible still applies today.

For those who turn away from the truth, and wander off into myths (2 Timothy 4:4), remember Galatians 6:7-8 is very specific; “Do not be deceived; God is not mocked; for whatever one sows, that will he/she also reap. (8) For the one who sows to the flesh (satan) will from the flesh reap corruption; but the one who sows to the Spirit (true believer) will from the Spirit reap eternal life.”

Just a quick note here, in another message some time ago, I wrote of the Crowns that will be given to those who will receive rewards by Jesus for things they did here. The Crown of Righteousness is for all – everyone – who right now are eagerly waiting and longing for His appearance; first in the Rapture, and then His physical second coming to the earth. The Crown of Glory is also known as the pastor crown; and is for all who have faithfully taught the true word of the Father. These are the ones that are giving God’s true message from the Bible.

For those who say they are giving the word of the Lord, we look to 1 Peter 3:15-17; “but in your hearts honor Christ the Lord as Holy; always being prepared to make a defense to anyone who asks you for a reason for the hope that is in you; yet do it with gentleness and respect; (16) having a good conscience so that when you are slandered, those who revile your good behavior in Christ, may be put to shame. (17) For it is better to suffer for doing good, if that should be God’s will, than for doing evil.”

Jesus never forced anyone to accept Him or His gospel (good news). God does not force us to worship Him; although He very well could. That would not be true love, and our God is all about love. (John 3:16-18; Romans 5:8) He allows each and every one of us to choose which eternity we will face. All who call on the name of the Lord will be saved. (Joel 2:32; Acts 2:21 and Romans 10:9-13)

Likewise, all who refused to follow God’s will from creation to Calvary; and all who will have rejected Jesus from Calvary to the end of the millennium, will be in the Great White Throne Judgment (Revelation 20:11-15). From this judgement, all will be sentenced to the Lake of Fire forever, along with the final antichrist and false prophet (Revelation 19:20) and of course, with satan (Revelation 20:10). Once we have taken our last breath here, our eternity is set. It will either be with Jesus, or it will be with satan. All chances for repentance and Salvation will not be available for those who chose to “wait until later”. Satan loves this as we don’t know when our last minute will be.

As with the one thief on the cross that accepted Jesus just before he died, all who do the same will be with Him forever. As with the other thief, all who do not receive and accept Jesus will be with satan forever. Thing is, satan won’t be in charge in hell as he will most likely suffer the most punishment of all. It won’t be any sort of party atmosphere; everyone will be in their own agony.

We can put our faith and trust in God’s Holy Word as given in 2 Peter 1:20-21; “knowing this first of all, that no prophecy of scripture comes from someone’s own interpretation. (21) For no prophecy was ever produced by the will of man, but men spoke from God as they were carried along by the Holy Spirit.”

Therefore, all who “Preach The Word”, the absolute True Word of God, are giving the Great Commission as we’re entrusted to do so. It doesn’t mean everyone has to spread the word worldwide; but to be ready to give the good news when the opportunity presents. The Holy Spirit will see that it goes where it was meant to.

In the movie, “Oh God”, George Burns spoke of a mega church pastor that appeared on all types of media. He said, “He gives a lot of words; just not any of mine.” I can very much imagine our Heavenly Father has felt this way from the beginning. I do not want to leave this earth and have to face the absolute most righteous and just Judge, and be told I didn’t present the truth. Those who fall in that category will be present to give their false doctrines to a “church” full of followers the Sunday right after the rapture.

When Jesus calls us up to meet Him in the air, it will be over in the “twinkling of an eye”. This has been calculated to be less than one second. The dead in Christ will rise first, and then all true believers, calculated to be about 10% of the world’s population, will rise up to meet Jesus and avoid the Tribulation. (1 Corinthians 15:51-53; 1 Thessalonians 4:13-17)

Call on Jesus today as we’re not guaranteed tomorrow. He will turn no one away, and no one has sinned so great that His shed blood cannot cleanse you. To wait could be the biggest eternal mistake you could ever make.