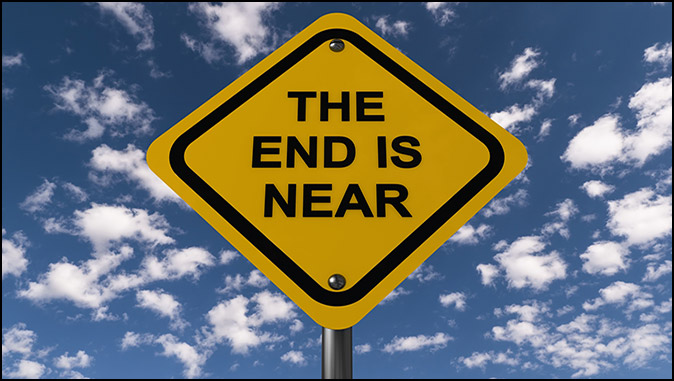 Just About There
By Dennis Huebshman

Matthew 24:6-8; “And you will hear of wars and rumors of wars. See that you are not alarmed, for this must take place, but the end is not yet. (7) For nation will rise against nation, and kingdom against kingdom, and there will be famines and earthquakes in various places. (8) All these are the beginning of the birth pains.” Luke 21:17; “You will be hated by all for My name’s sake.” Luke 21:28: “Now when these things begin to take place, straighten up and raise your heads, because your redemption is drawing near.” (ESV – all emphasis mine)

Taking a look at what is happening in the world today, we have a clear picture of 2 Timothy 3:1-5; “But understand this, that in the last days there will come times of difficulty. (2) For people will be lovers of self, lovers of money, proud, arrogant, abusive, disobedient to their parents, ungrateful, unholy, (3) heartless, unappeasable, slanderous, without self-control, brutal, not loving good, (4) treacherous, reckless, swollen with conceit, lovers of pleasure rather than lovers of God, (5) having the appearance of godliness, and denying its form. Avoid such people.”

All the above is as if we are watching world-wide events today, rather than them being prophesied about almost 2000 years ago. Every one of the listed bad traits are commonplace in today’s world. The very last line – Avoid such people – is great advice, however this is next to impossible to accomplish.

Evil is coming out of the closet as never before. There have always been those who would rather serve satan, and enjoy all the so-called pleasures this world offers here and right now. Our Savior never has been surprised about this, and even tells about the two pathways in Matthew 7:13-14. We are just about at the end of this age right now.

As long as a person has not taken their last breath on this earth, they still have not sinned so badly that they cannot be forgiven. The absolute unforgivable sin today is to leave this earth without Jesus as their Savior. The two thieves that were crucified with Jesus were examples of the only two ways that we have. The one thief ridiculed the Savior, and I firmly believe he did not know just who Jesus was. He neither asked for, nor received forgiveness from the Savior. The other thief realized that the person next to him was totally different than they were. He came to believe that this person was the Messiah, and could actually save him. Not from earthly death, but from eternity in hell. (Luke 23:39-43) That thief’s soul was with Jesus in paradise that very day, just as Jesus promised.

As for the unrepentant thief, his outcome would be the same as the message given in the parable of the rich man and Lazarus. When the rich man died, his soul was instantly in hades, which is a holding place for all who will be judged at the Great White Throne. They are, and will be in torment already, and will know immediately they made a terrible judgment call. The first to occupy the actual lake of fire will be the tribulation antichrist and the false prophet as given in Revelation 19:20.

At the end of the millennial reign of Jesus on this earth, satan, who had been bound for that 1000 years, will be released for a “little while” (Revelation 20:3). He will be allowed one last campaign against Jesus, in which he will fail miserably, along with all who had turned to him. Satan will be the third occupant of hell (Revelation 20:10), followed by all from the beginning of this earth to the last day, when they will go before the white throne. (Revelation 20:11-15)

All who were out of the will of God from Eden to the cross; and all who rejected Jesus from the cross to the end of the millennial reign will be in that judgment. It will not be to see if they are condemned, as everyone there will go into the Lake of Fire made specifically for satan and his followers. (Matthew 25:41) They will be in that line to be told of their individual degree of punishment that they will be subjected to forever. There will be no pardons or reduced sentences as all judgments are final.

Some may say that if God is such a loving deity, how could He “send” someone to eternal torment. The point here is that our Father has given us everything we need to make a decision to choose the right path. (Romans 10:9-13) He allows everyone to make their own decision as to where they will spend their forever. He will never force anyone to accept the gift that was given by our Savior, but will accept all who will call on Him to be saved.

There will be another judgment when we leave this earth, which will be the Judgment Seat of Christ. That is found in 2 Corinthians 5:10. “For we must all appear before the Judgment Seat of Christ, so that each one may receive what is due for what he has done in the body, whether good or evil.” This judgment is for all who were true believers and had been in the will of God prior to the crucifixion, and all who had received and accepted the Savior from Calvary to the end of this earth. Everyone there will spend eternity in Heaven with the Savior, but will lose or gain rewards at that Judgment.

Saved or unsaved, we are all sinners, and will be until we are transformed into our new bodies and new mindset after going to be with Jesus. Romans 3:10; Romans 3:23 and Romans 6:23 are very specific about this. There was only one “human” to ever live on this earth, or ever will live on this earth, that was completely sinless, and He is the one who has shed His precious blood so we could have an eternal home with Him. For believers, when we sin, we have the promise of 1 John 1:8-10, that if we confess our sins and ask forgiveness, the Father will do so. This does not give us license to just keep on sinning to take advantage of His good will. This will go along with the “lose or gain” rewards as mentioned above.

One thing I have a problem with is how anyone can reject the Savior. Hank Williams wrote over 160 songs before he died at the age of 29. (9/17/23 – 1/1/53) One of them is called “How Can You Refuse Him Now”. It’s a very simple song that shows that our Savior never gave up on us, and we need to call on Him to Save us now.

1.) there’s a story old, that is often been told, of how our Savior died. As they nailed His hands, He cried “They don’t understand”; as the blood flowed from His side. (ref)

2.) As He hung there on the tree, He prayed for you and me; there was no one His pain to ease. Before He died, He faintly cried; “Father, forgive them please.” (ref)

What it all comes down to is a person believing in and receiving and accepting Jesus; or deciding this world has all they would ever need or want. I have actually heard people say that Jesus is a myth, or that He really isn’t God, but was just another prophet of old. Some have said that all “gods” are the same, and all religions worship the same god.

Taking just a moment right now; think of eternity, and where do you want to spend yours? There are only two choices, no matter what any false prophet may tell you, and each person must decide for themselves.

First, one has to decide if they believe that the true translations of the Bible are actually the Holy Word of the Father. There are some faux bibles that have been “tweaked” to fit human wishes. The actual true words were given to Holy Spirit inspired writers and are not man’s own words.

To be sure, do not take anyone’s word for what they say is in the Bible. Read the passages for yourself. Just reading a chapter or two day is invaluable. If you’ve never read the Bible before, I would recommend reading the book of John first, followed by the book or Romans.

No matter what, decide who you’re going to serve; Jesus or satan. There are no other options. Our Savior is waiting for your decision and your call. He shed His precious blood on a cruel cross for all of our souls. “How Can You Refuse Him Now?”

Hope to see you at Home, soon.