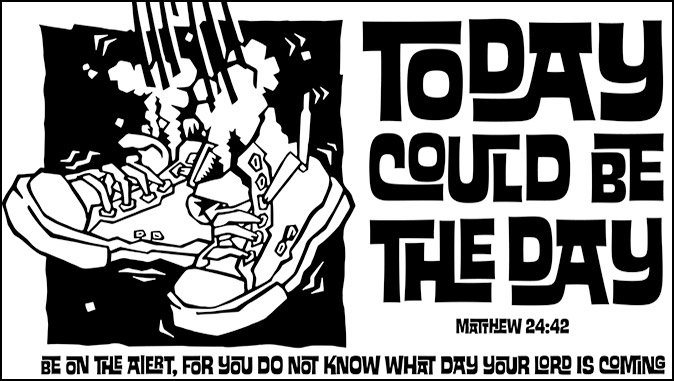 Just About Any Day Now
By Dennis Huebshman

With each passing day, we’re seeing more and more of this world acting out 2 Peter 3:3-4; “Knowing this first of all, that scoffers will come in the last days with scoffing, following their own sinful desires. (4) They will say, ‘Where is the promise of His coming? For ever since the fathers fell asleep, all things are continuing as they were from the beginning of creation’.” (ESV all emphasis mine)

The part of continuing is true, for ever since Genesis 3, satan has steadily done his best to pull souls away from the Father, Jesus and the Holy Spirit. One of his best catch-lines is “Did God really say?” While it seems to us humans that it’s been ages and ages ago that this took place, 2 Peter 3:8 tells us; “But do not overlook this one fact, beloved, that with the Lord, one day is as a thousand years, and a thousand years as one day.”

God made time for humans, and He is not regulated by it as we are. Jesus Himself was able to see the future, and told us that there would be more on the broad road to destruction, than on the straight and narrow path that leads to eternal life. (Matthew 7:13-14) Even though He became lower than the angels while He was here, He was still fully God.

The Father also gave us His Holy Word through the Holy-Spirit-inspired writings of about 40 authors as 2 Peter 1:21 states; “For no prophecy was ever produced by the will of men, but men spoke from God as they were carried along by the Holy Spirit.” The Father has given us all we need because He does not want anyone to fail and spend eternity in the Lake of Fire. In 2 Peter 3:9, He states; “The Lord is not slow to fulfill His promise, as some count slowness; but is patient toward you, not wishing that any should perish, but that all should reach repentance.” He will never force anyone to receive and accept His Son’s precious gift, but He will not turn away any who do so.

All the 2 Timothy 3 descriptions of last day actions and attitudes are here, and gaining ground almost hourly, and all at once for the first time ever. As we look around the whole world, it’s plain that the “scoffers” outnumber the believers by quite a margin.

Anything that has to do with all the alphabet groups, and the “trans-everything” groups, are being accepted by the masses as the new normal. Those who proclaim to be followers of Jesus are being put down, persecuted and in some cases imprisoned and even martyred.

In some areas, even in the United States, parents are being told they cannot interfere with their children being indoctrinated in alternate lifestyles. This is not just for teenagers, but is even going all the way back to kindergarten, kids. In some places, kids are being removed from their homes when the parents don’t cooperate.

Paul described people as “treacherous, reckless, swollen with conceit; lovers of pleasure rather than lovers of God.” (2 Timothy 3:4) Satanic worship is out in the open as never before, and it seems as if many of our present society views this as completely normal.

Satan knows the Bible better than people do; he just doesn’t accept it. He realizes that we are on the cusp of the end of this age, and one day soon, this era will end, and the tribulation will begin. As with us, he doesn’t know the day or hour this will take place.

In 1 John 2-5, the apostle speaks of false prophets and antichrists being present in his day. That was almost 2000 years ago, and their presence has been with us ever since. Today, their out in the open movement is rapidly gaining ground all over the earth, and if something does not take place on behalf of all true believers, we would be caught up in that awful 7-year period.

A couple verses that give us true hope are 1 Thessalonians 1:10; 1 Thessalonians 5:9-10 and Revelation 3:10. They are the Father’s promise to keep us from the “wrath to come”, and from “the hour of trial”. That will be the tribulation when satan and his evil forces will be turned loose on earth just before Jesus physically returns to rule for 1000 years.

It should be noted that the word “Rapture” is not in the Bible, but the word “Harpazo” is in Greek translations. It means to take up or take away. Several other words are not in the Bible such as “Trinity”, “Discipleship”, “Halo” and of course “Bible”.

The most recognized Rapture verses are found in 1 Thessalonians 4:13-17; “But we do not want you to be uninformed, brothers, about those who are asleep (have died), that you may not grieve as others do who have no hope. (14) For since we believe that Jesus died and rose again, even so, through Jesus, God will bring with Him those who have fallen asleep. (15) For this we declare to you by a word from the Lord, that we who are alive until the coming of the Lord, will not precede those who have fallen asleep. (16) For the Lord Himself will descend from Heaven with a cry of command, with the voice of an archangel, and with the sound of the Trumpet of God. And the dead in Christ will rise first. (17) Then we who are alive, who are left, will be caught up together with them in the clouds to meet the Lord in the air, and so we will always be with the Lord.”

One thing to note, the “Trumpet” mentioned in the above verses has nothing to do with the Trumpet Judgments of Revelation 8:6 through Romans 11:18.

Throughout Jewish history, trumpets have been used to call attention to any event of importance, in order to alert all who were nearby. Obviously, no matter where a true believer will be in this world, they will hear the “Trumpet of God” announcing that His Son has come to take us Home.

Matthew 24 speaks mainly of the time of the tribulation, however one verse could be Rapture-oriented. Matthew 24:36; “But concerning that day and hour, no one knows, not even the angels of Heaven, nor the Son, but the Father only.” While on earth, Jesus allowed Himself to be totally human. From the instant He took His last breath on the cross, His Spirit would have been immediately with the Father, just as He promised the repentant thief he would be as well.

As referenced in a message in 2019, Carrol Roberson sang “Any Day Now”, indicating it could even be today. Just seeing all the prophetic signs being fulfilled more and more rapidly should tell us that the “Any Day Now” is very close.

For any who have put off calling on Jesus, please read Romans 10:9-13 for the simple, yet necessary steps to receive Salvation. The stakes are too high to gamble with your eternal soul. Reach out, confess your sins to the Savior, and ask Him to forgive you and prepare a place for you with Him in Heaven forever. Works will not get anyone into Heaven as given in Ephesians 2:8-9. Only through the blood of Jesus are we saved.

The only alternative is the Great White Throne Judgment, followed by eternity in hell. False prophets will tell you there’s many ways to heaven, and all religions worship the same god. That is absolutely false. It is totally up to each person to choose who they will follow. As Joshua said in Joshua 24:15, he and his household would worship the Lord.

Hope to see you at Home! Maranatha – Come Lord Jesus!