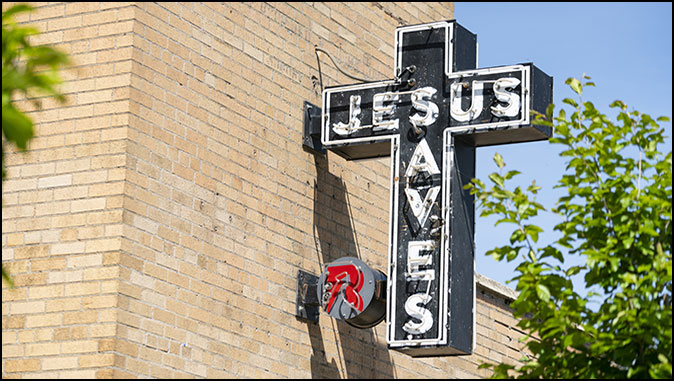 Joel 2:32; “And it shall come to pass, that everyone who calls on the name of the Lord shall be saved.”

Acts 2:21; “And it shall come to pass, that everyone who calls on the name of the Lord shall be saved.”

Romans 10:13; “For everyone who calls on the name of the Lord shall be saved.”

Please note, when the Father says anything in His word to us, it’s important. Further, if something is repeated, especially three or more times, it’s an absolute Holy Guarantee. There are literally hundreds of verses throughout the Bible that tells us the Lord Saves. (all emphasis mine)

Romans 8:1; “There is therefore now no condemnation for those who are in Christ Jesus.” For everyone who has received and accepted Jesus as their Savior, Redeemer, Messiah, and absolute best Friend, it doesn’t matter what race they are or where in the world they reside, they can absolutely become a part of His flock. Some do so at the very cost of their lives.

There are reports from Africa, China, Muslim nations in the Middle East, and other places of people being persecuted and even martyred for proclaiming their belief in Jesus as being their Savior. Some may say, “If they are being killed, how can we say Jesus saved them?”

Paul says in Philippians 1:20-21; “as it is my eager expectation and hope that I will not be ashamed, but that with full courage now as always, Christ will be honored in my body, whether by life or death. (21) For to me to live is Christ, and to die is gain.” When we die on this earth, we will immediately be either with Jesus or in a pre-torment state. The parable of the rich man and Lazarus is the best evidence for this. (Luke 16:19-31) It should be noted, there is no one in the actual Lake of Fire yet. That comes later.

This life is a brief moment in our eternity, yet what we do here will be with us forever. We can have Jesus as our Savior, and we are assured we will be with Him forever. There is no other way, no other so-called god that can save us. John 14:6; “Jesus said I am the Way, the Truth, and the Life; no one comes to the Father except by Me.” Acts 4:12; “And there is salvation in no one else, for there is no other name under heaven, given among men, by which we must be saved.”

Remember Romans 8:1 given earlier; add Romans 5:8; “but God shows His love for us, in that while we were (and are) still sinners, Christ died for us (For Me!).” Before someone gets all pious and says, “I’m not a sinner.” Read Romans 3:23; “For all have sinned and fall short of the glory of God.”

John the Baptist, Jesus’ cousin, declared in Mark 1:7-8; “And he preached saying, after me comes He who is mightier than I; the strap of whose sandals I am not worthy to stoop down and untie. (8) I have baptized you with water; but He will baptize you with the Holy Spirit.”

Before anyone gets the idea that we can earn or buy our salvation, please consider Ephesians 2:8-9; “For by Grace you have been saved through faith, and this is not our own doing; it is the gift of God, (9) not a result of works, so that no one can boast.”

On the opposing side is Lucifer, satan, the devil, prince of darkness, and many other negative names. He fancies himself as being equal to God, yet he is a created being, made by God. This is to say, he was made by Jesus as John 10:30 states, “I and the Father are One.” Being part of the Holy Trinity – Father, Son and Holy Spirit – Jesus has always been there. We don’t know when satan was created, but it was some time before the creation of the earth.

His first murderous act against humans was in the Garden of Eden, when he caused Adam and Eve to sin against God’s will. (Genesis 3) Up to that time, humans had been created to be immortal; yet death came to earth because of their sin against the Creator. Also, from that moment on, humans are born with a sin nature instilled within us, so that we could never provide any sacrifice to the Father to atone for our sins. That’s why Jesus became our only perfect sacrifice that the Father could accept. If we do not receive and accept Jesus, we cannot be saved.

Going to Isaiah 14:12-14; “How you are fallen from Heaven, O daystar, son of dawn. How you are cut down to the ground, you who laid (and is still doing so) the nations low. (13) You said in our heart, ‘I will ascend to Heaven; above the stars of God I will set my throne on high; I will sit on the Mount of Assembly in the far reaches of the north; (14) I will ascend above the heights of the clouds; I will make myself like the Most High’.” This is destructive self-pride at its finest.

Then Ezekiel 28:14-17; “You were an anointed guardian cherub (angel). I placed you on the Holy Mountain of God; in the midst of the stones of fire you walked. (15) You were blameless in your ways from the day you were created, until unrighteousness was found in you. (16) In the abundance of your trade, you were filled with violence in your midst, and you sinned; so I cast you as a profane thing from the Mountain of God, and I destroyed you, O guardian cherub, from the midst of the stones of fire. (17) Your heart was proud because of your beauty; you corrupted your wisdom for the sake of your splendor. I cast you to the ground; I exposed you before kings to feast their eyes on you.”

The Father has not totally taken satan out yet, but his day will come at the end of the Millennial reign of Jesus. (Revelation 20:10) Revelation 12:4-9 speaks of the angels who were influenced by satan, and they were cast out with him. They became the demons spoken of in the Bible, and are with us today. They will also end up in the Lake of Fire.

Peter warns us in 1 Peter 5:8; “Be sober minded; be watchful. Your adversary, the devil, prowls around like a roaring lion, seeking someone to devour.”

It’s amazing that so many people today are openly worshiping satan, and even have “churches of satan”. It’s not as if they never heard the word of God; they chose to follow satan and what he supposedly offers. This appears better to them than eternity with the Lord. The master deceiver is well-versed and skilled at tempting humans, and he even tried to tempt our Lord and Savior while He was on the earth. Jesus remained strong, even though He was fully human at the time. Had Jesus sinned even once, we would all be hopelessly lost.

Jesus knew more would follow satan than Himself as stated in Matthew 7:13-14. This is one reason that all who call on Him will become a part of His Holy Flock, and is available to everyone worldwide. (John 10:16)

The only time it will be too late to repent and be saved is when a person takes their last breath on this earth. There is no forgiveness after that. It’s not real wise to think you have all the time in the world to call on Him, as we don’t have the guarantee of even the next hour.

Have the “Blessed Assurance” that you belong to the Holy Shepherd who is willing to receive your confession right now. (Romans 10:9-13) We will not be perfect as long as we’re in these corrupt human bodies, but you can be forgiven of all sin – except for rejecting Him to the end. God gave us 1 John 1:8-10 as a remedy for when (not if) we do slip and sin.

Your choice; join the worldly forces and be a servant of satan all the way into Hell. Or, call out to the Savior, and have an eternity with Him in paradise, bought and paid for completely by His precious blood.

Doesn’t sound like a hard choice, but satan will do anything and everything he and his demons can to pull us away from Jesus. Just remember, satan hates you – Jesus loves you. There is no other eternal option. God doesn’t send anyone to Hell; the choice of Heaven or Hell is made by each individual.

Come Lord Jesus! We Long To Be With You!