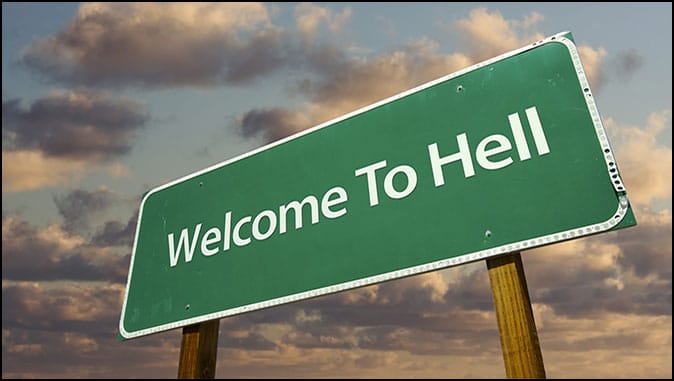 Jesus Previewed Hell For The Lost
By Dennis Huebshman

A preview of the Revelation 20:11-15 judgment is Matthew 25:41; “Then He will say to those on His left, depart from Me, you cursed into the eternal fire prepared for the devil and his angels (demons).” (any emphasis mine)

The actual lake of fire is not yet populated. Looking at Luke 16:19-31, we have the parable of the rich man and Lazarus, which was a preview from the Savior of where souls will end up after death. Lazarus represented a righteous person whose soul, before Calvary, went to a place of peace and rest called “Abraham’s bosom or side”. After Calvary, a righteous person’s soul goes to be with Jesus, as was referred to by Paul in Philippians 1:21. Their souls will rejoin with their earth bodies, whatever is left, to be converted to “forever immortal” bodies at the Rapture. Those who are still alive at the time of the Rapture, will be changed on our way up to meet Jesus in the air.

The rich man was in Hades, also called Sheol, and his punishment had already started. This is where all the unrighteous pre-calvary, and non-believers post calvary, will be until the White Throne Judgment. This is known as the first death.

Looking at Revelation 20:11-15; “Then I saw a great White Throne, and Him who was seated on it. From His presence, earth and sky fled away, and no place was found for them. (12) And I saw the dead, great and small, standing before the throne, and books were opened. Then, another book was opened, which is the Book of Life. And the dead were judged by what they had done. (13) And the sea gave up the dead who were in it. Death and Hades gave up the dead who were in them, and they were judged, each one of them, according to what they had done. (14) Then, Death and Hades were thrown into the lake of fire. This is the second (final) death, the lake of fire. (15) And if anyone’s name was not found written in the Book of Life, he/she was thrown into the lake of fire.”

Just a note here, all who are in that long line are not in the Book of Life. Those who pass from this life into the first death, which is to die without Jesus, and all that perished before His sacrifice, will have understood immediately that they chose the wrong path on earth. Each will answer for every sin they ever committed because they are not covered by the precious blood of Jesus.

It is understood that after the White Throne Judgment, each individual will be assigned a degree of punishment that they “earned” while alive on this earth. Some will receive greater torment than others, and it stands to reason, satan’s will be the maximum overall.

The Father will be fair and just in assigning punishment, and each one will understand why they are suffering. No one who was righteous toward God; and all who received and accepted Jesus, will not be at this judgment.

There are some who believe Jesus went into hell when He died on the cross, and they actually believe He was tormented for our sins there. Fact is, His torment was completed on the cross, and when He said “Tetelestai”, or “It Is Finished”, His suffering was complete. Going to 2 Peter 3:18-20a; “For Christ also suffered once for sins, the Righteous for the unrighteous (including me); that He might bring us to God; being put to death in the flesh (human), but made alive in the Spirit, (19) in which He went and proclaimed to the spirits in prison (Hades or Sheol), (20a) because they formerly did not obey…” The absolute moment He dreaded in the whole crucifixion process was when He took upon Himself every sin of this world, and the Father had to look away. It was a brief moment, but significant because Jesus and the Father had never been separated before.

Jesus’ appearance to the group in Hades or Sheol, which included fallen angels, was to declare that He had obtained the victory over sin and death. He was letting them know positively that their doom was sealed forever. In 2 Peter 2:4;9-10; “For if God did not spare angels when they sinned, but cast them into hell and committed them to chains of gloomy darkness to be kept until the Judgment; (9) then the Lord knows how to rescue the Godly from trials, and to keep the unrighteous under punishment until the day of judgment; (10) and especially those who indulge in the lust of defiling passion an despise authority.” Note; the angels that followed Lucifer into sin do not have a pathway to forgiveness as humans; they are lost forever.

The order that the lake of fire will be populates is as follows: Revelation 19:20; “And the beast (antichrist) was captured, and with it the false prophet who in its presence had done the signs by which he deceived those who had received the mark of the beast, and those who worship its image. These two were thrown alive into the lake of fire that burns with sulfur.” Note, the beast is called an “it”, and not given any human title.

After this, satan is bound and thrown into a bottomless pit for 1000 years, after which he will be released again for a short period of time. (Revelation 20:1-3)

Next, Revelation 20:10; “and the devil, who had deceived them, was thrown into the lake of fire, and suffer where the beast and false prophet were; and they will be tormented day and night forever.”

Finally, the Great White Throne Judgment that was given earlier. After this, sin and death will be no more.

There will be people who truly call on Jesus to be their Savior that do nothing more than that. All who call on the name of the Lord will be saved. (Acts 2:21; Romans 10:9-13) We do not earn or buy our Salvation, however, you would think that His flock would want to live in a way that Honors Jesus as Lord and Savior. Paul says in 1 Corinthians 3:15; “If anyone’s work is burned up (really didn’t live to totally honor Jesus), he/she will suffer loss; though he/she himself/herself will be saved, but only as through fire.”

Looking at 2 Corinthians 5:10, a believer’s first appearance will be the Judgment Seat of Christ, also known as the Bema seat “For we must all appear before the Judgment Seat of Christ, so that each one may receive what is due for what he/she has done in the body, whether good or evil.” (Also Romans 14:10; 1 Corinthians 3:11-15) Rewards will be given or taken away at this judgement, but the person still has an eternal home with the Savior

As I heard a pastor say some years ago; “The main thing, is to keep the Main Thing, the main thing”. I know that Romans 3:23 applies to everyone – all have sinned – even me. I know that as long as I am in this human body and human mindset, I will slip and sin. I rely on 1 John 1:8-10 to seek forgiveness, but also long for the appearance of my Lord and Savior, to take all true believers away from this evil planet.

That day is rapidly approaching; and I am a bit greedy. I am looking forward to receiving my new imperishable immortal forever body, and my new frame of mind that will not be subject to any temptation. I am also looking forward to my Crown of Righteousness for longing for His appearance. It’s not that I want to keep the Crown, but I want to be able to lay it at His feet, and tell Him how much I love Him for loving me!

You can look forward to this also. There’s a crown for all who long for His coming. (2 Timothy 4:8)

Jesus conquered sin and death; especially the second death in the lake of fire; for all who will receive and accept His gift that He gave for us at Calvary. The best advice I can give is don’t wait too long to decide to choose Him. He could be calling us up to meet Him in the air this very day. Those who hesitate will be looking forward to the worst 7-years this earth has ever seen; that is if you were to survive all seven years.

He won’t force anyone, but is ready to accept all who truly ask Him to forgive them, and be their Savior. He personally will prepare a place for you with Him in Heaven. (John 14:1-3) Your sins can and will be forgiven, and you will be pure and holy in the sight of the Father.

Jesus Is Savior and Shepherd

Jesus Is Savior and Shepherd By Dennis Huebshman In a number of messages, I have…