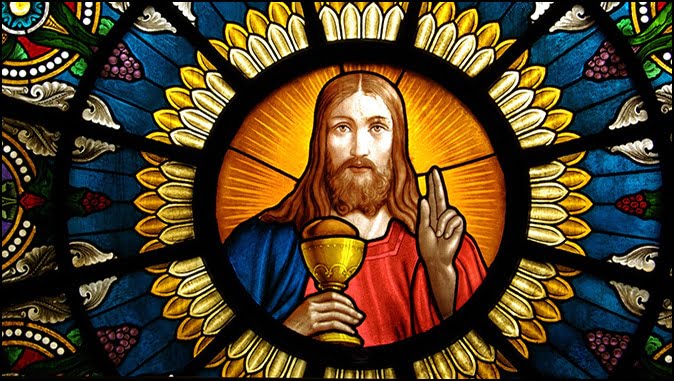 Jesus Is Living In Me
By Dennis Huebshman

This may seem familiar, as I posted one similar in April, 2019. This one contains updates to include events of today, and the song is just as critical as it was then.

Galatians 2:20; “I have been crucified with Christ. It is no longer I who live, but Christ who lives in me. And the life I now live in the flesh, I live by faith in the Son of God, who loved me and gave Himself for me.” This was a statement that summed up how Paul was inspired by the Savior after his conversion on the road to Damascus. We need to understand that this applies to every person on this earth as well. When we realize this, our life takes on a new meaning, and our eternity a new direction. Those who reject Jesus will face a terrible eternity. (all emphasis mine)

The Godhead is a “Trinity”; three entities in one; Father, Son and Holy Spirit. When we receive and accept Jesus as our Savior, we have the full power of this Trinity with us. John 14:15-17; “If you love Me, you will keep My commandments. (16) And I will ask the Father, and He will give you another Helper to be with you forever; (17) even the Spirit of truth, whom the world (unbelievers) cannot receive, because it neither sees Him nor knows Him. You will know Him for He dwells with you, and will be in you.” Please note that this passage includes the whole triune Godhead. Then John 14:20; “In that day, you will know that I am in My Father, and you in Me, and I in you.”

John 14:1 and 6; “Let not your hearts be troubled. Believe in God; believe also in Me. (6) Jesus said to him (Thomas), I am the Way, the Truth and the Life; no one comes to the Father except by Me”

Peter who had denied Jesus three times just before the crucifixion, became an inspired speaker after Pentecost. Filled with the Holy Spirit in Acts 4:12, he boldly told the religious leaders; “And there is Salvation in no one else; for there is no other name under heaven, given among men, by which we must be saved.”

A song that holds a lot of meaning for me personally was written by the Easter family. It’s a Southern Gospel style hymn, and it’s called “Jesus Is Living In Me”. It’s performed by James, Jeff and Sheri Easter on YouTube, and well worth the time to listen to it.

(1) Lonely years, I had nothing; my life had no meaning; till I heard about Calvary. Then I knelt down in prayer; the Lord met me there; now Jesus Is Living In Me.

(ref) He’s in my feet when I’m walking; in my tongue when I’m talking; in my eyes, and now I can see. He’s in the songs that I’m singing; in my heart His joy is ringing; Jesus Is Living In Me.

(2) Through the valleys He has brought me; to the top of the mountain; and over life’s troubled sea. Now I sing for His glory; songs that tells the Great Story; cause Jesus Is Living In Me. (ref)

Starting with the very first stanza, I had heard about Calvary all the way back to my early childhood. However, as with many people, the significance didn’t really sink in. I thought I was just fine because I believed Jesus was real, but without a relationship with Him, I was totally lost. Even satan and his demons believe Jesus is real. (James 2:19)

I’ve mentioned my “prayer warriors” in the past, and I’m firmly convinced they were holding me up in their prayers; asking the Father to open my eyes and touch my soul, before it became too late. As the song says, “Then I knelt down in prayer; the Lord met me there”. From that moment forward, I realized just how lost I really had been; and thanked the Father for not requiring me to pass from this earth before I truly asked Jesus to be my Savior. I still thank Him for this every day!

It became a quest that I read the words God gave me. Each day, I learned a bit more; and still do; and my new relationship with the Savior has grown stronger. I totally understand and believe that when I asked for Jesus to forgive me, and to be my Savior, the Holy Spirit came to dwell inside of me. The Bible says this would happen, and I believe God cannot lie as given in Titus 1:2.

The refrain and second stanza describe my feelings today. I find myself singing praises to the Lord, even though it sounds a bit like “Alfalfa” of the original Little Rascals. (Yes, I was around way back then) The father doesn’t hold our non-talent against us. He loves us to “sing” praises to Him the best we can; and with true devotion in our hearts. Psalm 105:1-3; “Oh give thanks to the Lord; call upon His name; make known His deeds among the peoples! (2) Sing to Him, sing praises to Him; tell of all of His wondrous works! (3) Glory in His name; let the hearts of those who see the Lord rejoice!”

A few more verses are Psalm 5:11; Psalm 9:1-2; Psalm 89:1; Psalm 104:33; Isaiah 42:10; Colossians 3:16 and James 5:13. One illustration is when Paul and Silas were in prison, and had been beaten and put in stocks. Acts 16:25; “About midnight, Paul and Silas were praying and singing hymns to God, and the prisoners were listening to them.” It goes on to tell about an earthquake releasing them from their bondage, but because they didn’t run away, valuable souls were saved – namely the jailer and his whole family.

Please understand one thing; when we receive Jesus and accept the wonderful gift He gave for us, we are still subject to sin. It’s part of human nature, and everyone sins. (Romans 3:23) The one advantage all true believers have, is the Father will forgive us when we confess and ask forgiveness. (1 John 1:8-10) As our relationship grows, our sin nature causes our “conscience” (Holy Spirit) to let us know we have to repent and turn away from habitual sin. The only time we will actually be sin-free is when we get our new “forever” bodies and new mindset. For the believers today, that will be when the Rapture takes place.

However, the down side is that all who refuse to accept Jesus as their Savior before they take their last breath on this earth, will spend eternity separated from Him. The Lake of Fire was initially made for satan and his demons (Matthew 25:41), as they do not have a pathway to forgiveness. Everyone from the beginning of earth’s creation, up to Calvary who were not in God’s will; and everyone from Calvary to the end of the Millennium that denies Jesus as their Savior, will join satan in that Hell as given in Revelation 20:11-15. There are no other options.

False prophets are increasing in number, just as the Savior, Paul, John and others said they would. A lot of people have “religion”, but it’s not biblical. Jesus had the most problems with the “religious leaders” of His day. Today, more and more evangelical churches are turning away from the true word, and are having entertainment sessions. They give wonderful words that make people feel good. Music is designed to keep the “happy” feeling continue along with special effects. Sad to say, that the first meeting time after the Rapture will not see a change in attendance in many of the mega-churches. The following 7-year period will be totally miserable for them.

Jesus is waiting for your call, but He won’t force anyone to accept Him. Those who do will have the Holy Spirit in them, and as a result, Jesus will be there too. Then “Jesus Is Living In Me” will be a very meaningful song for you as well.

Call today; this age is rapidly drawing to a close as evidenced by the daily news. Satan knows his time is about done, and he’s pulling every trick he knows to pull souls away from Jesus. Our Savior’s flock knows what’s going on, and calls out to Him to Shepherd us. (John 10) The only difficult part is having faith and believing Jesus’ gift is for real. Romans 10:9-13 gives the pathway to forgiveness and redemption. I went to my knees, and called out to Him; He lifted me up as a newborn person with an eternal address in Heaven. As Mr. Rogers so eloquently put it…”Won’t you be my neighbor?”