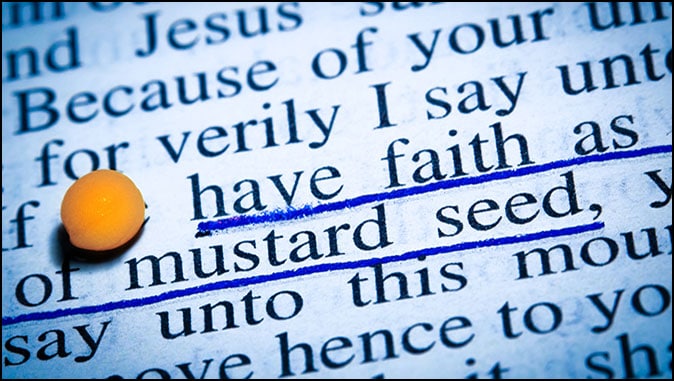 It Takes Faith
By Dennis Huebshman

Romans 10:17; “So faith comes from hearing, and hearing through the word of Christ.” Matthew 17:19-20; “Then the disciples came to Jesus and said, why could we not cast it out? (a demon) (20) He said to them, because of your little faith. For truly I say to you, if you have faith like a grain of mustard seed, you will say to this mountain, move from here to there, and it will move; and nothing will be impossible for you.” (ESV – all emphasis mine)

To give a bit of perspective, a mustard seed is smaller than the middle of a typed “o”. Doesn’t seem like much, but in today’s world, even that much faith in the Lord is missing. If something can’t be seen or touched, belief becomes difficult. The turning away from Jesus is becoming more evident with each passing day. Video games and “chat” rooms are opened a whole lot more than Bibles. Also, a number of previously bible-based churches are becoming entertainment centers, and the true word of God is absent.

Missouri is commonly known as a “show-me” state, which implies they will only believe what can actually be shown to them. When it comes to Christianity, our whole country is acting like a “show-me” nation. Sadly, satan is only too willing to present every kind of so-called earthly pleasure that will draw multitudes of people away from Jesus, and he knows every “lure” there is to tempt us.

Our Savior’s message is plain, simple, and in easy to understand words. John 14:6; “Jesus said to him, I am the Way, the Truth, and the Life; no one comes to the Father except through Me.” That leaves little room for any other meaning to anyone who believes the Bible is the inerrant word of God. And therein lies a big problem. The New Testament is full of warnings about false prophets and antichrists being present and influencing the masses, especially near the end of this age. They were here in Jesus’ time, and their numbers have grown a lot in just the past couple decades. Satan has his minions proclaiming that there’s many ways to heaven without Jesus; all religions worship the same god; all sexual relationships are perfectly okay; and so on and so forth.

This world can be very confusing without telling a child they can be any gender they wish. Matthew 19:4; “He answered, have you not read that He who created them from the beginning made them male and female?” Mark 10:6 echoes this; “But from the beginning of creation, God made them male and female.” No where in the Bible does it say anything about humans having a choice of what gender they are. That’s pure satanic.

With all this confusion taking place in the world today, it would seem logical for us to go to the source the Creator gave us as our instruction manual. Some have said the word “BIBLE” actually stands for “Basic Instructions Before Leaving Earth.” God doesn’t force His word upon us, but it is there for our use, if we choose to study it. There are several true interpretations to help us understand what is written, and a study bible is an invaluable source of learning.

John 14:6, as given, is a definite statement that tells us Jesus is the only way to eternal life. Acts 4:12 makes the same statement; “And there is Salvation in no one else, for there is no other name under heaven, given among men, by which we must be saved.” Furthermore, Joel 2:32; Acts 2:21 and Romans 10:13 all tell us that “All who call on the name of the Lord will be saved.”

Seems this would be enough to convince everyone that if they have Jesus in their hearts, they will have eternal life in an imperishable, immortal, pain-free, death-free, forever body. But first of all, they must accept God’s word as truth, and not just a book of fairy tales and myths.

Romans 10:9-13 gives the steps to Salvation in ABC form. First, we admit and confess we’re sinners; believe and have faith that Jesus died for our sins and that God raised Him from the dead; and we are to call on Jesus to forgive us and to be our Savior forever.

Simple enough, but for some, it’s too simple. Surely, to get a place in heaven we must do “x” number of good deeds to earn or buy our way in, don’t we? After all, there can’t be anything such as a free gift of eternal life for everyone, is there?

How about Ephesians 2:8-9; “For by Grace you have been saved through faith. And this is not your own doing; it is the gift of God, (9) not a result of works so that no one may boast.” We’re saved by the Grace of Jesus, through the Mercy of the Father, with a gift we could never “afford” on our own.

James 3:1 is a warning that I take very seriously; “Not many of you should become teachers, my brothers, for you know that we who teach will be judged with greater strictness.”

It has never been my intent to impress others with “eloquent speech” filled with fifty-cent words, when nickel words would do just fine. Paul said in 1 Corinthians 14:19; “Nevertheless, in church, I would rather speak five words with my mind in order to instruct others, than a thousand words in a tongue.” Jesus’ Church is all the believers of the world, not a building that people go to for a couple hours each week. Anywhere the Gospel is given is Church. Our Savior gave messages and parables from boats at the shore, on hillsides, and just about any other place other than the Temple that was there. He stated; “For where two or three are gathered in My name, there am I among them.“ (Matthew 18:20)

Today, more than ever before, we all need to have Jesus as our Savior. This era is rapidly coming to a close, and the next one will be absolutely terrible, especially for anyone who tries to receive and accept Jesus as their Savior. God has promised to keep all true believers from that time of wrath/tribulation. That will be through the “taking up”, “Harpazo” or “Rapture”, which takes place before the ultimate evil one begins his 7-year reign. Our Heavenly Father will provide comfort and security for all who accept Jesus. We may face some persecution here, but our faith lies in our Father’s word that our eternity will be wonderful. He cannot lie as given in Titus 1:2.

Right now, the evil one is being held back by the Holy Spirit, but during the 7-year tribulation, the world, through satan, will lead you down many fearful and confusing and evil paths. There will still be a possibility of calling out and being saved during that period, but most likely at the cost of your life.

As for entering eternity, all who refuse the gift from Jesus, that He paid so dearly for, and by accepting the things of this world rather than Him, it will be a very painful forever. What is available here on this earth isn’t even a blink of an eye compared to eternity. Revelation 20:11-15 tells of all the unbelievers final judgment. The antichrist, false prophet and satan will already be in the Lake of Fire – Hell. All the cartoons of little devils tormenting people there are so wrong. Satan and all his demons will have their own misery, and won’t torment anyone else.

This is so unnecessary to endure. It’s your free-will choice of where you will spend eternity – Heaven or Hell. And yes, it’s just that plain and simple. Receive and accept Jesus as your Savior, and have faith and believe He will forgive you and save you. Heaven will be your eternal home.

Reject Him, and it will be Hell forever with no chance of pardon. No one has committed sins that are bad enough that they cannot repent and be saved. The thief on the cross next to Jesus was saved because he accepted Jesus before taking his last breath. The unforgiveable sin is to not have Jesus when you die. Jesus could return at any minute now, as everything that had to be done before His call has been accomplished. It’s just a matter of time before the Father sends Jesus to gather His
“flock” and to take us Home.

Call today – right now would not be too soon.