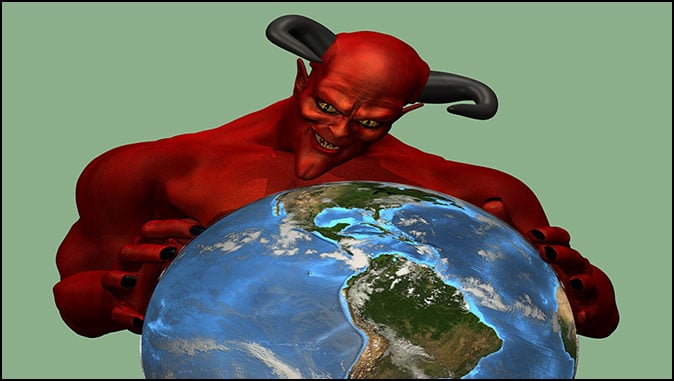 If we watch the true world events unfold, not the “faux garbage” being put out by the so-called major news networks, one might think this world has suddenly gone insane. From one who lived through the “beginning” of all this current nonsense starting in the 1960’s, everything today was pre-planned, and put into effect at exactly the right time. Satan and his crew have been following a plan that will lead to the emergence of a one world government, controlled by a one world leader, controlled by satan himself. The actual start time goes way back to the first century, which shows just how patient satan is to fulfill his evil schemes. (all emphasis mine)

The second portion of all this evil mix that many fail to understand, God is not taken by surprise over any of it. In fact, He is allowing all the events to take place, and through end-time scriptures, listed just about every one of them. Those of us who recognize that our Heavenly Father is in control, should be rejoicing, because Luke 21:28 states; “Now when these things begin to take place, straighten up and raise your heads, because your redemption is drawing near.” (ESV) That “beginning” is here right now, and gaining momentum daily.

Matthew 24:4-12 is somewhat lengthy, but gives quite a description of our approaching end times. “And Jesus answered them, see that no one leads you astray. (5) For many will come in My name, saying I am the Christ, and they will lead many astray. (6) And you will hear of wars and rumors of wars. See that you are not alarmed, for this must take place, but the end is not yet. (7) For nation will rise against nation, and kingdom against kingdom, and there will be famines and earthquakes in various places. (8) All these are but the beginning of the birth pains. (9) Then they will deliver you up to “tribulation” and put you to death, and you will be hated by all nations for My name’s sake. (10) And then many will fall away, and betray one another, and hate one another. (11) And many false prophets will arise and lead many astray. (12) And because lawlessness will be increased, the love of many will grow cold.”

Most of the above issues that Jesus foretold of have started already, yet it’s nothing compared to what will take place when the 7-year tribulation actually starts. Just considering famines and earthquakes, there was a locust infestation from Africa to China which destroyed a lot of food crops; and earthquake activity is happening more frequently than ever, and in places that never had them before.

Christians are being persecuted worldwide right now because of our beliefs in Jesus, and even the courts are cooperating with the antichrists and false prophets. In some countries today, just to proclaim Jesus as your Savior will bring on martyrdom. Eventually, this will happen worldwide. America is turning away from the Savior, and the number of true believers has dropped significantly.

Luke 21 gives most of the same scenarios with some issues amplified. Verses 12-17; “Before all this, they will lay their hands on you, and persecute you, delivering you up to the synagogues and prisons, and you will be brought before kings and governors for My name’s sake. (13) This will be your opportunity to bear witness. (14) Settle in your minds not to meditate beforehand how to answer, (15) for I will give you a mouth and wisdom, which none of your adversaries will be able to withstand or contradict. (16) You will be delivered up even by parents and relatives and friends, and some of you they will put to death. (17) You will be hated by all for My name’s sake.”

Just recently, we have witnessed college educators being dismissed for making remarks about what God defines as true marriage relationships. One of those who was dismissed was at what was supposed to be a “Christian College”. In Europe, Scandinavia and even Canada, there are some who are facing serious prison time for speaking out in favor of God’s word, over what the evil world is proclaiming. We haven’t gotten to the point of our leaders putting Christians to death yet, but rest assured that when the antichrist takes over, it will be happening.

John tells us in 1 John 2:18-19; “Children, it is the last hours, and as you heard that antichrist is coming, so now many antichrists have come. Therefore, we know that it is the last hours. (19) They went out from us, but they were not of us; for if they had been of us, they would’ve continued with us. But they went out that it might be plain that they are not of us.”

That’s word from the first century stating that the antichrist movement had already started, and would continue right up to the tribulation. We must remember, John wrote the book of Revelation with the words the Savior gave him. Those he spoke of that were “of us”, were as given in the parable of the seeds in Matthew 13. Those the sower threw on “rocky ground”, first heard the word and got “excited” about it, but they did not develop a true lasting relationship with Jesus. After a period of time, they will fall away. The seeds that were sown among thorns, were those who heard the word, but the lures of this world is so strong within them that they will reject anything to do with Jesus.

Today, the Viet Nam protestors of the 1960’s and early 1970’s are some of the professors teaching their liberal ideas in our colleges. This and through the influence of one of our recent presidents, all the abominations that our Father spoke against have come out of the “closet” so to speak, and the LGBT and all the other letters have formed. Even though they are in the minority, they gained enough backing from influential places that they have become a force to be reckoned with. Their earthly philosophy is even reaching all the way to the elementary school children, and without parental consent. Even some so-called “evangelical” churches are saying the abomination no longer applies to us.

As evil seems to be gaining momentum and strength, many are worried that we are already in the Tribulation. Several verses show this is not the case. We’re told in 1 Thessalonians 1:10; 1 Thessalonians 5:9-10 and Revelation 3:10, that God has not destined us – all true believers in Jesus – to be in the wrath.

That tribulation/wrath starts in Revelation 6 when Jesus opens the first seal, releasing the rider on a white horse which is the antichrist. This evil person cannot appear until 2 Thessalonians 2:7 takes place. “For the mystery of lawlessness is already at work. Only He who now restrains it will do so until He is out of the way.” From Revelation 6 to 19, there is no mention of the “church” on earth.

The Lord’s flock, spoken of in John 10, are looking for the call from our Great Shepherd to lead us to pleasant pastures. We don’t know exactly when we will receive the call, but seeing all prophecy being fulfilled right up to the Rapture tells us it will be soon. Also, it will happen in the “twinkling of an eye”, which scientific experts have stated is less than one second.

Knowing that we are “at the door”, it would be the best decision to have received and accepted the gift our Jesus bought for us at Calvary. Romans 10:9-13 gives us the steps to Salvation. All who truly call on the Savior will receive eternal life with Him.

On the other hand, all who reject Jesus and His perfect and wonderful gift will receive eternal condemnation in Hell, also known as the Lake of Fire.

Plain and simple, it’s each individual’s choice. Jesus or Hell; no other option exists, in spite of what the false prophets are proclaiming. Also, today would not be too early to call. We are closer than we can even imagine to the sound of the Trumpet of God and the shout from the arch angel.

Don’t be left behind.