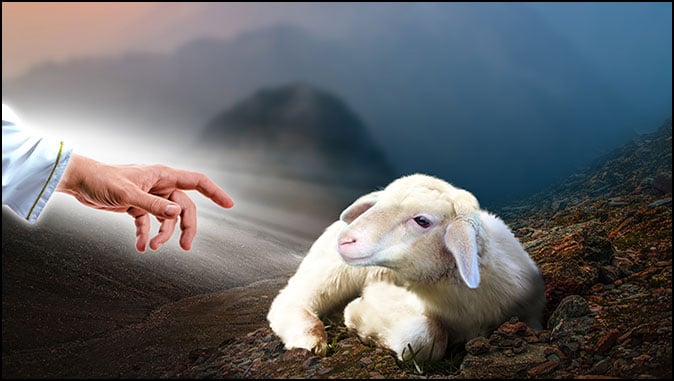 Independent and Lost
By Dennis Huebshman

There is a term I heard recently called “Cafeteria Christianity”. Anyone who has ever eaten in a cafeteria setting knows that you have a tray, and you go from one end of the food line to the other, making your selections by putting some items on the tray, and passing others up. At the end of the line, you approach the register, and “pay” for the selections you have made. (all emphasis mine)

Today, as never before, people are turning away from the true Bible content, and selecting or rejecting whatever they wish. In their minds, they see others do this, and they seem to be content with their own “brand” of worship. After all, the Bible and God’s words are ancient, and can’t possibly still apply in our “modern” world, can they? In the past, I have remarked that some people would like to purchase a Bible written in pencil. That way, they could keep or erase whatever they wished.

Satan-inspired false prophets are growing in strength and numbers, and have infiltrated some previously strict Bible-based organized churches. They tickle ears, and stroke egos to keep the seats and collection plates filled, and present entertaining but unbiblical messages. The younger generation today is falling away in large numbers from true Christianity, and they are following popular new trends that are being accepted by their peers. It’s sort of a “safety in numbers” philosophy. Things is, Matthew 7:13-14 says the path leading to destruction is broad, and many are on it.

What many fail to realize is, God’s word is timeless. It’s as relevant today as when first given, and will remain so to the end of this earth. Matthew 24:35; “Heaven and earth will pass away, but My words will not pass away.”

Hebrews 13:8; “Jesus Christ is the same yesterday, and today, and forever.” Looking at 2 Peter 1:21; “For no prophecy was produced by the will of man, but men spoke from God, as they were carried along by the Holy Spirit.” Along with this thought is 2 Timothy 3:16; “All scripture is breathed out by God, and profitable for teaching, for reproof, for correction, and for training in righteousness.”

The test of a true believer is 2 Corinthians 5:17; “Therefore, if anyone is in Christ, he is a new creation. The old has passed away; behold the new has come.” Romans 8:9 states; “You, however, are not in the flesh, but in the Spirit; if in fact the Spirit of God dwells in you. Anyone who does not have the Spirt of Christ, does not belong to Him.”

From the beginning, God gave the same warning that is found in the last chapter of Revelation. From Deuteronomy 4:2; “You shall not add to the word that I command you, nor take from it, that you may keep the commandments of the Lord your God that I command you.” Going to Revelation 22:18-19; “I warn everyone who hears the words of the prophecy of this book; if anyone adds to them, God will add to him the plagues described in this book; (19) and if anyone takes away from the words of the book of this prophecy, God will take away his share in the Tree of Life and in the Holy City, which are described in this book.”

Sometimes, there are those who get caught up with the words that are written, and have a fear that they didn’t do exactly what’s there. They become concerned that because they didn’t do exactly right, they are not truly saved. Example, Romans 10:9 states; “because if you confess with your mouth that Jesus is Lord, and believe in your heart that God raised Him from the dead, you will be saved.” This message is the first part of the ABC’s of Salvation, that we admit that we are sinners.

Question, where do you have to make this confession? Is a person only saved if they make it in a church building in front of a bunch of witnesses, or can it be somewhere else? Many times when Jesus spoke to the Father, it was recorded that He spoke outside the hearing of others, and only between Him and His Father. One example is the prayer the Lord made before his crucifixion in John 17.

How about His instruction in Matthew 6:16; “But when you pray, go into your room, and shut the door, and pray to your Father who is in secret. And your Father who sees in secret will reward you.” God loves us, and did not give us instructions to trip us up. He wants us to know that we shouldn’t complicate what He has given us.

Remember the first paragraph that said, “at the register, you pay for your selections”? The decision to select or reject the Savior is up to each individual. God will force no one to call out to Jesus to be saved, but will honor all those who do. The only alternative is found in Revelation 20:11-15 which describes the Great White Throne Judgment. God looks at the heart of each and every one of us, and knows who is sincere in receiving and accepting the gift His Son paid so dearly for at Calvary. He doesn’t expect a “stage production” from any of us.

No good deeds or works are adequate enough to earn our way into eternal life. Isaiah 64:6 states that, “we have all become like one who is unclean, and all our righteous deeds are like a polluted garment.” False prophets will tell you that by worshiping the way they tell you to is all you need. Isaiah 5:20; “Woe to those who call evil good, and good evil; who put darkness for light, and light for darkness; who put bitter for sweet, and sweet for bitter.”

Just before going to the ABC’s of Salvation, we need to look at Ephesians 2:8-9; “For by Grace you have been saved through Faith. And this is not you own doing; it is the gift of God, (9) not a result of works so that no one can boast.”

In light of this, how do we get away from worldly influence, and become a part of our Savior’s precious flock?

We’ve already looked at Romans 10:9, which tells us to Admit or confess that we are sinners; and our only pathway to the Father is through His Son, Jesus. (John 14:6; Acts 4:12; Romans 3:23; Romans 6:23) Second, we must Believe God raised Jesus from the dead to be our Savior, and by doing so He conquered sin and death for all who will accept Him. Romans 10:11 states; “For the scripture says that everyone who believes in Him will not be put to shame.” Finally, Romans 10:13; “All who Call on the name of the Lord will be saved.”

Up until about 35 years ago, I believed I was all set for eternity because I believed in Jesus, and even occasionally attended various church services…That is, I believed He was real and did in fact exist. James 2:19 says; “You believe that God is one, you do well. Even the demons believe and shudder.” It was put on my heart that there was more than just believing Jesus exists. There were some “prayer warriors” that were steadily talking to the Father on my behalf, and I believe the Holy Spirit opened my thinking to look deeper into my eternal destination.

For the first time ever, I read the word of God from Genesis through the Book of Revelation. John and Romans were particularly revealing. I sincerely asked Jesus to forgive me and be My Savior. It wasn’t any fancy speech, and I was alone, but I believe my eternal address changed at that moment. I began to develop a “relationship” with the Savior, which is what our Salvation is all about.

For anyone who would like to be assured that their eternity will be spent in Heaven with Jesus, just sincerely talk to Him. One example could be; “Jesus, I now I am a sinner, and need a Savior. I know there is no other way to Heaven except by you, and I ask Your forgiveness and to save me from hell.” If you talk to Him, and are sincere in receiving Him, He will not turn you away.

If we have Jesus, we have the Father. Without Jesus, we do not have the Father. (John 3:18; 1 John 5:12) The one verse that seals Gods covenant with us is Romans 8:1; “There is therefore now no condemnation with those who are in Christ Jesus.”

As long as we are in these human bodies with our human mindsets, we will sin. God even gave us assurance of forgiveness in 1 John 1:8-10. He asks that we are truthful and sincere in seeking His Son to be our Savior. After all, Jesus shed His sinless pure Holy blood so that we could be forgiven. When we are a part of His flock (John 10), our sins will be forgiven as far as the east is from the west. (Psalm 103:12)

The sad part is there are so many who will not believe and call out, and they will be lost forever. Today would not be too early to call on Jesus and start your relationship with the Savior. Just call before it’s too late. He will be calling all true believers up to meet Him in the air very soon, and it would be wonderful if you were there.