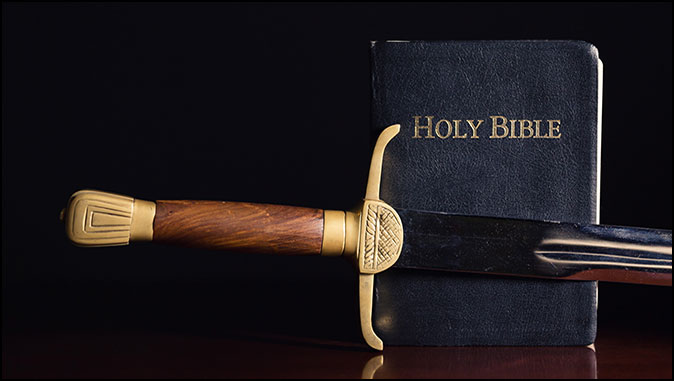 I Will Fight On
By Dennis Huebshman

The title of this message should be the battle cry of all true believers worldwide. In John 16:33, Jesus said; “I have said these things to you that in Me, you may have peace. In the world, you will have tribulation. But take heart; I have overcome the world.” (ESV all emphasis mine)

Jesus was preparing for His glorification for our sake, by taking our sin punishment on a cruel cross outside Jerusalem. I make this personal and say, He took My Sins! Here we have the one fully human – yet still fully God – that was willing to suffer agony and shed His pure sinless blood to appease the Father’s need for a perfect sin sacrifice. John 10:11 and 18 tells us “I am the Good Shepherd The Good Shepherd lays down His life for the sheep. (18) No one takes it from Me, but I lay it down of my own accord. I have authority to lay it down, and I have authority to take it up again. This charge I received from My Father.”

At any given time during His stay on this earth, Our Savior could have decided we weren’t worth the effort, and could have left us to our own resources. That would have guaranteed that Heaven would be empty of human souls, as no one could ever make an acceptable sin sacrifice to our Heavenly Father. As is, even at the creation of this earth, God knew He would have to give us a gift that was far more valuable than all the riches this earth holds. One precious drop of our Savior’s blood sealed our pardon. This is for any and all who will receive and accept His gift, and Jesus shed His perfect blood as a “one time” sacrifice for all of us.

For those pre-calvary, His blood reached back to cover all the saints that had been faithful and in the will of God. From Calvary forward, it has covered and will cover all those who are in Christ, and have a relationship with Him.

Hebrews 10:4 states; “For it is impossible for the blood of bulls and goats to take away sin.” Isaiah 53:5, “But He was wounded for our transgressions; the chastisement for our peace was upon Him, and by His stripes, we are healed.” Isaiah and all the old testament prophets were looking for the arrival of the Messiah, but it was a lot of years after they died that Jesus came to earth.

Matthew 13:17; “For truly I say to you, many prophets and righteous people longed to see what you see, and did not see it; and to hear what you hear, and did not hear it.”

What we’ve been seeing take place today is nearly a word for word description from the Bible of events that would be happening just before the end of this age. Some people say these things have always been there, and to a degree, that’s true. However, the intensity of the evil, famines, weather patterns and hate in this world are all present at the same time as never before. For those who believe otherwise, it will not get any better. We definitely have the “scoffers” of 2 Peter 3:3-4 among us today.

Believers in Jesus are being labeled as “haters”, because we do not accept the lifestyles that God called abominations. This does not mean we do not love our brothers and sisters; we just don’t like what they do. Jesus felt the same way about the radical religious leaders of His day. He loved them all for their immortal souls, but He just wouldn’t accept their heresy.

Continuing in our faith is to put all our trust in our Heavenly Father. God does not walk away from those who have Jesus as their Savior, even though there are times of persecution here. In 2008, Dale and Cheryl Golden (The Goldens) released a song called “I Will Fight On”. The example it gives is of a shepherd boy (David) trusting in God, and with just a sling and some stones, he went against a seasoned giant warrior, and ultimately defeated him. Their songs can be found on You Tube.

1.) A shepherd boy, stood all alone. His weapon but, five little stones. In faith he fought, with spirit strong; while in his heart, rang Zion’s song.

Ref) I will fight on, till the battle’s o’er. And the enemy, shall rise no more. I will trust in God, and God alone. I shall not lose heart, and I will fight on.

2.) The wounds of life, cut cold and deep. And triumphs mount, is hard and steep. The shepherd’s Lord, is My God too; and I know, He will see me through. (ref)

One line that stands out is “the shepherd’s Lord, is My God too.” David did not lead a sinless life, and the Bible tells of his good deeds and also his sinful ones. One reason he stayed in the Father’s favor was that he took responsibility for the times he did sin and fall short. He would seek forgiveness from the Father, and it was granted.

Another youth in the bible that put his faith in the Lord, lived before David’s time, and that was Joseph. His brothers were so jealous of him, that they sold him into slavery and told their father that wild animals had killed him. Joseph could’ve sunk into total despair, and probably would not have survived very long without divine protection.

But God had plans for Joseph, and it was obvious He was given some special attention. Joseph was “bought” by one of Pharaoh’s officers, Potiphar. Joseph proved himself to be loyal and trustworthy, and Potiphar made him overseer of all that he had. Even when tempted by his owner’s wife, Joseph proved himself worthy by refusing to submit. When he was falsely accused and thrown into prison, God saw to it that Joseph found favor with the jailers. After a period of time, Joseph was brought before Pharaoh, and interpreted some dreams for him. He was subsequently made the second highest authority in all of Egypt.

All this did not take place overnight. It was about 13 years from the time Joseph was sold, until his appearance before Pharaoh. In Genesis 41:46, we see Joseph was 30 year old when he entered the service of Pharaoh. Then he was ruler for over 7 years before he was reunited with his brothers.

During all the time Joseph was a “slave”, and then all the time when he was a ruler, he never turned away from God. He had hardships, and was even separated from his family for an extended period of time. However, he remained righteous. When the time came that he could have “punished” his brothers, he forgave them instead. This example was also used by our Savior at Calvary, when He asked the Father to forgive those crucifying Him.

Through all the changes taking place today, and the obvious increase in evil all around us, it’s understandable that some become discouraged and lose their faith in our Heavenly Father. Some forget that God’s timing is different than ours, and He knows the exact second that He will send our Savior to take us Home.

God has not forgotten about us, and He even provided all the signs we would be seeing just before the Trumpet sounds and the shout comes from the Archangel. I assure you, I am about as impatient as anyone, yet, I believe the experts when they state our leaving here is imminent. That is, for the ones who have received and accepted the gift Jesus gave us that’s paid for in full.

With all the satanic activity present, and with all the false prophets that are now “teaching” in previously bible-based evangelical churches, our faith should be given encouragement by the true word of the Father. In 1 John 2 through 5, we’re told that false prophets and antichrists would increase near the end of this age. Jesus Himself said there would be a falling away from the true faith.

As Joshua 24:15 states, me and my house will serve the Lord. I don’t anticipate any return to what we thought was normal, but “I Will Fight On” anyway. I will continue to encourage others with the simple ABC’s of Salvation. A – Admit we’re all sinners; B – Believe Jesus is the only way to Salvation; and C – Call on the name of the Lord and be saved. For the scriptures that covers these, see Romans 3:10; Romans 3:23; Romans 6:23; John 14:6; Romans 8:1 and Romans 10:9-13. Next, go to Ephesians 2:8-9 to be assured it is by grace we are saved, and not of any works.

God does not want anyone to fail, and is waiting to forgive all who will repent and accept His Son. (2 Peter 3:9) However, for any who refuse the gift, and all who will take their last breath on earth without Jesus as their Savior, they will go through the White Throne Judgment of Revelation 20:11-15. There is no hope at that event.

There is no special time of the day, no special place, no rehearsed statements to make in order to call on Jesus He is waiting to hear from you, and ready to accept all who truly call out to Him to forgive them. Just talk to Him as a friend asking forgiveness, as He’s the absolute best Friend you will ever have. Please call today, right now, as tomorrow could be too late. Then you will be ready to rise up to meet Him in the air at any time.