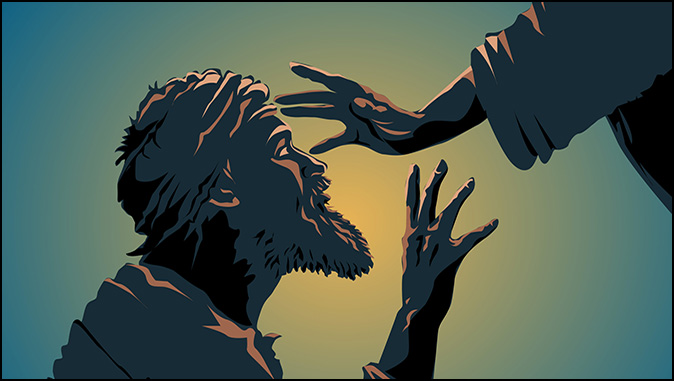 I Was Blind But Now I See
By Dennis Huebshman

Sometimes, people who are without certain capabilities are more “whole” than many who are totally healthy in every way. In John 9, Jesus saw a man who had been blind from birth. Jesus caused the man to receive his sight after putting a mudpack on his eyes, and then having him wash his eyes in the pool of Siloam. The man received his sight because he put his faith in the person who ministered to him – Jesus. The Pharisees were upset because the previously blind man did something on a sabbath that, to them, was illegal. (ESV – all emphasis mine)

The religious leaders questioned him at length, and asked who had opened his eyes. In verse 17, the man simply stated, “He is a prophet.” The religious group disputed that he had been blind, but when his parents were called, they verified this was their son who was blind from birth, but had no idea how he could now see. The parents didn’t want to make any conflicting statements, or they would have been put out of the Synagogue.

The Pharisees questioned the man again, and told him the one who healed him was a sinner. The answer given in verse 25 was perfect; “Whether He is a sinner, I do not know. One thing I do know, that though I was blind, now I see.”

Many people even today are all caught up in rituals, works, church rules and the like, and are missing the whole point. Religion is man-generated, and even the Savior had problems with the religious leaders of His day. There are churches today that were previously bible-based, that are being led out into left field. It’s more about feel-good ear tickling messages with heart-thumping music to keep audiences inspired. However, don’t ever mention sin and the consequences, or tell people they have to receive and accept Jesus as their Savior. This might cause some empty seats and collection plates. As the bible prophesied, false prophets and antichrists are in full swing today. We are just that close to the end of this age.

Through all the centuries from the time the first temple was created, and up to Jesus’ time here on earth, there were so many man-added “regulations” that no one could really keep up. When the man whose sight had been restored was challenged, he told them the truth. And he actually gave them a great insult. In verse 27; “He answered them, I have told you already, and you would not listen. Why do you want to hear it again? Do you also want to become His disciples?”

After a few more comments, he was cast out of the Synagogue. When Jesus approached him, and simply asked, “Do you believe in the Son of Man?”, the man asked who He would be so he could believe in Him. Then Jesus told him that “You have seen Him, and it is He who is speaking to you.” In John 9:38, we have a perfect example of a person being saved. “He said, Lord, I believe, and he worshiped Him.” This young man was more justified than all the Sanhedrin combined.

The word of the Lord – the Bible – is absolute truth, and as Paul wrote in 2 Timothy 3:16; “All scripture is breathed out by God, and profitable for teaching, for reproof, for correction, and for training in righteousness.” Peter states that all prophecy of scripture is from men who were influenced by the Holy Spirit. (2 Peter 1:20-21)

The warning of Revelation 22:18-19 is more than just for the book of Revelation. All the word of the Lord is subject to this, and we need to read and study God’s love letter to us, and not add to it, or take anything away from it.

Those who are changing the content of the Bible to fit their needs are in for a miserable eternity, Some are leaving out parts about the Savior, and some are trying to be “gender neutral”. I would not want to be someone who labeled the Father as a “she”. It may be fashionable in the world today, and in the eyes of satan, but definitely not humorous to the Father.

Prior to calling out to Jesus to be my Savior about 35 years ago, I could honestly claim that I was blind. My “vision” was limited to the things of this earth. I had attended church regularly until I left for the Navy. After that, I went to different services through the years, but never got into the word for myself. Like so many, I believed I was saved just by occasionally attending services, and everything the preachers were saying must have been true.

Then one Saturday, my bride of a short time asked if I wanted to go to church the next day. I surprised her, and myself, and went. That Sunday, I felt something I never had before, and after the service I told her I needed a new Bible. For the first time in my 40 years, I read it cover to cover. It was as if my eyes were finally opened. Since that time, I have read several different translations, and if I miss a day of getting into the Father’s word, I feel that something is definitely missing. I also found out that not everything those earlier preachers said was Biblical. In fact, I don’t remember the sermon that was presented on that day that the Spirit touched me.

Not only were my eyes opened as to just how lost I was, I learned that my Savior actually wants a relationship with me. And not just me, but every human that is on this earth. He knows that only a few, compared to the total, will receive and accept Him as given in Matthew 7:13-14. I feel privileged to state that my wife and I are a part of that “few”.

The Father will not force anyone to receive and accept the free gift that was paid for in full by His Son at Calvary. No one could ever provide a sacrifice that would be pure and acceptable, other than a part of the Holy Trinity itself.

The cost for the Savior was His pure sinless blood, and the suffering He endured for each and every one of us. It is completely our choice to receive or reject this more than generous offer.

For those of us who accept, we will have eternal life with a paradise we definitely do not deserve. However, the Father loves us so much, that it’s ours for the asking. (John 3:16; Romans 10:9-13)

Likewise, for those who do not accept this very generous offer, they will ultimately be separated from the Lord in a lake of fire, and in total darkness, and their punishment will be forever. This hell was specifically made for the devil and his demons (Matthew 25:41). All who have followed satan from the beginning of time to the end of the Millennial Reign of Jesus will receive the degree of their punishment at the Great White Throne of Revelation 20:11-15. As stated many times in the past, there are no pardons or mercy from this judgment. And, unlike what some false prophets claim, forever means just that – forever.

Our time on this earth is rapidly coming to the end of this age. The next main event is the tribulation or wrath, that will be for 7 years. This will be the worst time this earth has ever experienced.

Our Heavenly Father promised that all who have received and accepted His Son before that 7-years will be kept from going through it. That’s found in 1 Thessalonians 1:10; 1 Thessalonians 5:9-10 and Revelation 3:10. Paul covers The Event known as the Harpazo or the Rapture where all true believers will rise up to meet the Savior in the air. That’s 1 Thessalonians 4:13-17 and 1 Corinthians 15:51-53. This will take place in a “twinkling of an eye” or less than one second. That fact alone should indicate we need to be ready always.

Today would not be too soon to call out for Jesus to be your Savior. Every sign given that leads to the end of this age is here right now, and for the first time ever all at once. Luke 21:28, Jesus tells us that when these things “begin” to happen to look up, as His coming is near. We don’t know the exact day or hour, but just know it could be very soon.

Your Eternity – Your Choice!

Jesus The Gentle Shepherd By Dennis Huebshman Not too long ago, the song “Oh Gentle…