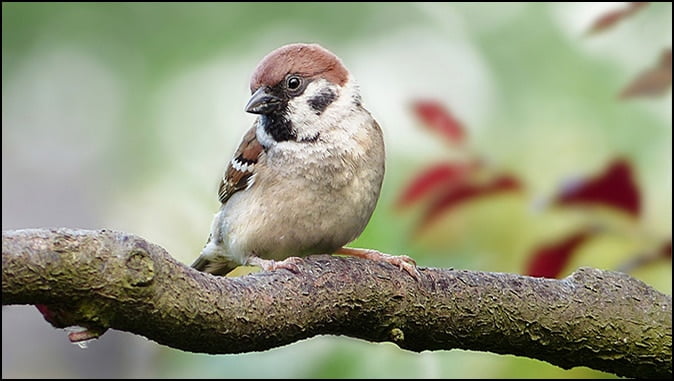 His Eye Is On The Sparrow
By Dennis Huebshman

Matthew 10:29-31, “Aren’t two sparrows sold for a penny? Yet, not one of these falls to the ground apart from your Father’s will. (30) Even all the hairs on your head are numbered. (31) So do not be afraid; you are more valuable than many sparrows.” (NET – emphasis mine)

Our Heavenly Father made the fish of the sea, birds of the air, and all kinds of animals of the land. This took place in Genesis 1:20-25. Going on to verse 26, “Then God said, Let Us make human kind in Our image, after Our likeness, so they may rule over the fish of the sea; and the birds of the air; over the cattle, and creatures that move there.”

First point here, God spoke in the plural, thereby giving us proof that He is a “Triune God” – Father, Son and Holy Spirit – that is described throughout the Bible. John 1:1-4 tells us Jesus was there at Creation, and John 10:30 is our authority that Jesus is God; one equal part of the Trinity.

Second, He made every living thing except humans first. God loves His creation, which includes every living breathing thing. As a note here, I believe that those who are cruel and abusive to His precious animals will be made to answer for their actions at some point in time. He gave us certain animals, fish and birds to be food for us, yet I believe He still expects us to be “humane” in their preparation.

Today, people are just about in a Luke 21:25-26 mode. “And there will be signs in the sun and moon and stars; and on earth, nations will be in distress; anxious over the roaring sea, and the surging waves. (26) People will be fainting from the expectation of what is coming on the world, for the powers of the heavens will be shaken.”

This will be just prior to the second “physical” coming to the earth by Jesus. The events taking place today are only a “preview of coming attractions”. It is nowhere near as bad as it will ultimately get.

This earth will go through a seven year period of tribulation as has never been here before. There have been disasters, evil and all variations of mayhem almost from the time of the beginning of creation. However, the sheer magnitude of the events for those seven years will far exceed everything so far. Jesus stated in Matthew 24:21-22, “For then there will be great suffering unlike anything that has happened from the beginning of the world until now (that was 2000 years ago); or ever will happen. (22) And if those days had not been cut short, no one would be saved. But for the sake of the elect, those days will be cut short.”

As is, over that seven year period, Zechariah 13:8 tells of the human forecast. “It will happen in all the land (world-wide), says the Lord, that two-thirds of the people in it will be cut off and die, but one-third will be left in it.” Were it not for Jesus’ return to shut down the “rebellion”, this earth would be empty of people.

There is a good side to all this, and we’re told of it in John 16:33. “I have told you these things so that in Me you may have peace. In the world, you will have trouble and suffering; but take courage, I have overcome the world.” Jesus made known to His disciples that He would return, and one verse that speaks of this is John 14:3, “And if I go and prepare a place for you, I will come back and take you to be with Me, that you may also be where I am.”

This is an indicator that Jesus will make one trip here before the Millennial reign to take His followers to be with Him. That would be the “Rapture”, even though that word is not found in scripture. The description of Rapture or Harpazo, which is a Greek word, describes a “snatching up” or “taking away”, and is given in 1 Corinthians 15:51-53 and 1 Thessalonians 4:13-18. This will be to fulfill God’s promise to keep us from the wrath/tribulation that unbelievers will endure. (1 Thessalonians 1:10; 1 Thessalonians 5:9; Revelation 3:10)

All who have truly called on Jesus to be their Savior are concerned about the events that have thrown this world into a tailspin, but we’re not destitute. We have Hope. We realize this is only temporary, and was prophesied in the Bible about what the end time here would be like. In fact, believers are looking up as we’re told to do in Luke 21:28, because Jesus said that when the birthing pains began, He is very near to coming for us.

All the signs and activities for His call have been steadily increasing, and lately, almost on an hourly basis. Ever since May 14, 1948, the clock began moving toward the “Midnight Hour”, which represents the instant that Jesus calls believers up to meet Him in the air; and some prophecy experts believe we are at about 11:58 p.m. The actual next prophesied event is the Rapture, followed by Ezekiel 38 and then Daniel’s 70th. week. (Daniel 9:24) Oh, and somewhere in there, Damascus gets destroyed for the first time ever. (Isaiah 17:1)

Jesus is coming soon to save His “Church”. That is not a building or any organized evangelical religion. His Church is all believers worldwide that are eagerly awaiting His call. With all the information available, you would think that almost all of the world’s population would be ready for this.

However, the sad truth is there’s estimated to only be about 10% to 12% of the world’s population that are true believers. For the Father’s chosen people, the Jews, that number worldwide is only about 1%-2%. For all who remain alive to the end of the tribulation, 100% will then accept Jesus, and be waiting for his physical return to rule for 1000 years in Jerusalem.

For all who believe God is not real, or that He is impersonal and doesn’t care about us, the title of this message is referencing a very inspirational song. AT the beginning of the 20th. century (1905), Civilla D. Martin wrote a tribute to our Lord and Savior that is totally relevant today. Consider the words:

1.) Why should I feel discouraged; why should the shadows come? Why should my heart be lonely, and long for heaven and home? When Jesus is my portion; my constant friend is He; His eye is on the sparrow, and I know He watches me.

2.) “Let not your heart be troubled”, His tender words I hear; and resting on His goodness, I lose my doubts and fears. Though by the path He leadeth; but one step I may see; His eye is on the Sparrow, and I know He watches me.

3.) Whenever I am tempted; whenever clouds arise. When songs give place to sighing; when hope within me dies. I draw the closer to Him; from care He sets me free. His eye is on the sparrow, and I know He watches me.

God sees everything that pertains to our world, and still He loves us. He wants no one to fail and be condemned (2 Peter 3:9), and this is possibly why He is giving us a bit more time.

However the day will come soon, when He will send Jesus to take His Flock (John 10:14-16) home. We will immediately be given imperishable forever bodies, and never be subject to the human sin nature again. And it’s completely up to each of us to be a part of His Flock – or not. To refuse is to be eternally condemned in an imperishable body designed to be in torment forever.

Doesn’t sound like a hard choice to make, but more will reject Him than accept Him. (Matthew 7:13-14) Be the one who keeps on the “straight and narrow”, and your forever will be wonderful. Romans 10:9 tells us to confess our sins, have faith and believe God raised Jesus from the dead to conquer sin and death for us. When you accept Jesus as your eternal Savior, you will know God will have His eye on you, just as He does the sparrow.

Read Between The Lines

Read Between The Lines By Dennis Huebshman John 19:19-22, “Pilate also wrote an inscription, and…

The Cross By Dennis Huebshman First, from God’s word; Exodus 20:3-5, “You shall have no…

A Letter from God

A Letter from God By Dennis Huebshman A while back, I came across this letter…

Ruth – A Study in Loyalty

Who Do You Serve?

Who Do You Serve? By Dennis Huebshman One minute after the Rapture takes place, you…